Malintzi Mexican Grocery Flies Under the Radar, but It’s Worth the Search

If you're a first-time visitor to Malintzi Mexican Grocery, it's all but certain you will wander around for a moment wondering where you are supposed to order. It's not that the tiny restaurant within the shop is hidden. The second you walk through the door, you encounter the market's sparsely appointed dining area just to the left of the grocery store and carniceria.

An order counter, however, is nonexistent. Instead, a small sign with the phrase "orden aqui," handwritten in black sharpie, points you to a small break between a wall and the meat counter. No one is manning that space, but if you walk around with a confused look on your face for long enough, chances are good that someone from the grocery side will eventually step in to help.

Not always, though. There's a palpable vibe that courses throughout the Malintzi market, giving you the impression that the place is determinedly under the radar and prefers it that way. It's why, when Mexican food lovers speak with effusive passion about the Latin American culinary jewels of north county — Taqueria Durango, La Tejana Taqueria, Pueblo Nuevo — you'll rarely hear even a whisper about this Woodson Terrace restaurant. It's also why its owner refuses to give his name to the press. "Just refer to the market," he says, in a borderline insular tone that evokes a complete disinterest in any sort of public relations campaign.

What Malintzi's proprietor will say is that the grocery store has been around for fourteen years, opening in 2006 as a way to serve the area's significant Latin American population. In 2009, he launched the restaurant side because it made financial sense; with a butcher shop and fresh produce on site, a food counter was the best way to use his products in different formats.

Malintzi has garnered a regular following for its prepared food offerings ever since, a fact that is apparent in the restaurant's consistently full seating area. Even during traditionally off hours — 3 p.m. on a Thursday, say — the faded red laminate snack-bar-style booths are filled with hungry patrons grabbing a bite to eat.

This is not a gringo-catering Tex-Mex joint, nor is it an approachably authentic spot frequented by culinary tourists. Malintzi is a homestyle restaurant serving traditional Mexican food to a mostly immigrant or first-generation clientele. The moment you walk up to the market's front doors, you are greeted with a mosaic of posters, help-wanted ads and money-wiring service offers, all written in Spanish. Some, shiny and recently plastered to the window, advertise an upcoming rodeo on the east side of the river. Others, tattered and taped over, promote long-past concerts, job opportunities or social services. The windows are covered in a peeling tint to block the sun from shining too brightly into the market. If you didn't know better, you might think Malintzi is no longer in business based on a quick glance from Woodson Road. 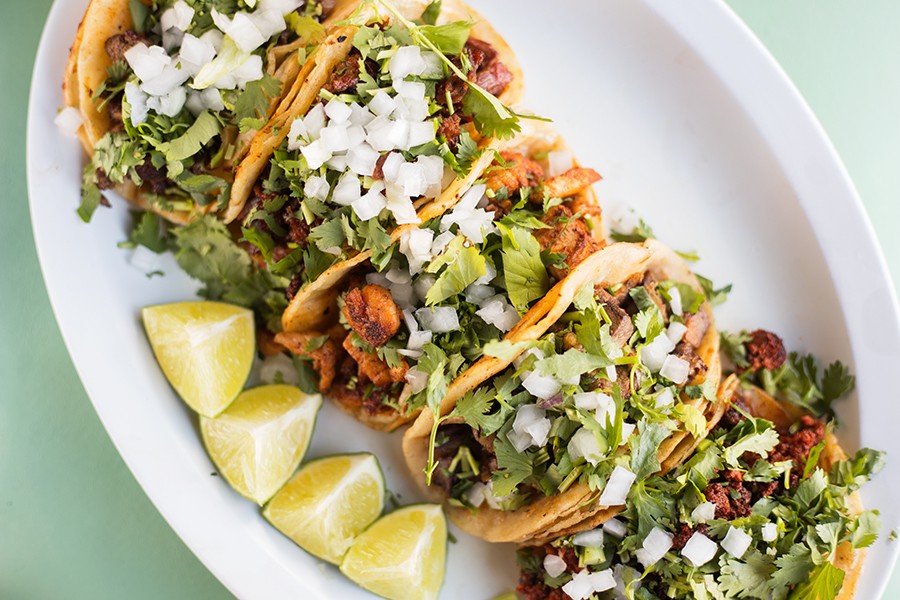 But Malintzi is open — and thriving — and all it takes is a bite of one of the restaurant's tacos to understand why. The corn tortilla alone is revelatory, occupying a middle ground between soft and crunchy; warmed by the grill so that the outside glistens to a pale golden color, the tortillas (typically three stacked together) are wrapped around any number of meats. Carnitas is succulent, pulled roasted pork that crisps up around its edges and is seasoned with just a hint of salt so that the meat's delicate flavor is front and center. Carne asada is marinated and grilled, giving the beef a pleasant bitterness. My one quibble is that some of the pieces were gristly.

I was not impressed by the lengua tacos, not because I'm squeamish about eating tongue, but because the meat had an off, gamey taste. I much preferred the cabeza, which was as tender and juicy as pot roast. The meat, which seemed to be mostly beef cheek, was so delicate it could have been spread onto a piece of bread. As good as it was, however, the chorizo was an even bigger standout. The ground pork had a rich, garlicky chile spice that is quite a bit hotter than typical versions. The heat lingered from the tip of the tongue to the back palate, not like a quick smack but like a slow-creeping warmth. It was haunting.

Tacos are Malintzi's calling card, but the restaurant is proficient in other dishes, too. The huarache, a flattened, oblong piece of fried masa dough, is like a Mexican version of flatbread. The dough is slathered with smashed pinto beans and topped with a choice of meat (I chose carnitas) and a shocking amount of fresh cheese, sour cream, avocado, onion and cilantro. It's a mess of a dish, but one that is fun to enjoy. 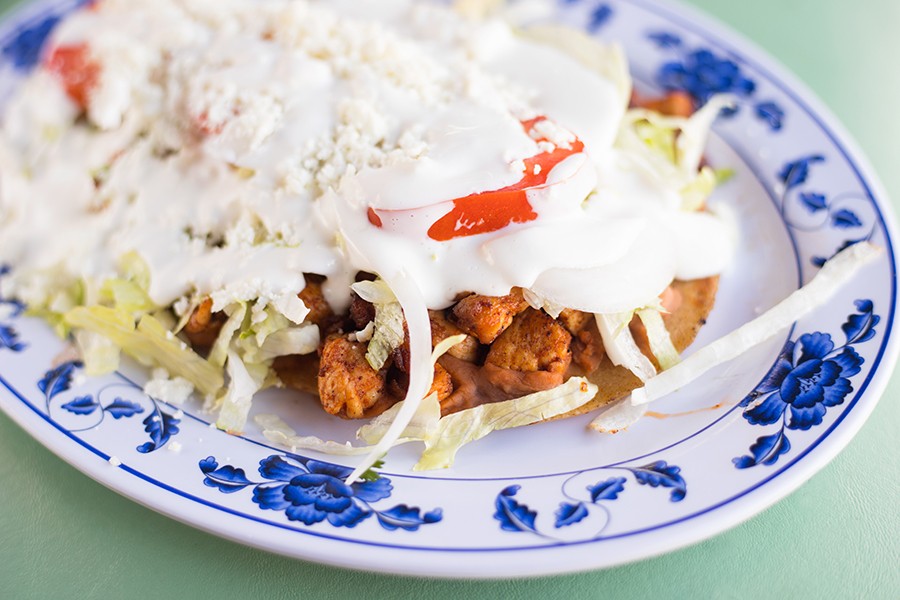 The sope is similarly adorned, but instead of being flattened and elongated like the huarache, the masa is round like a tortilla, and much thicker. The result is something akin to a Mexican-style cornbread that makes an excellent base for toppings, especially the chorizo since its spicy juices soak into the sope, infusing the entire base with flavor.

Malintzi serves several tortas, all of which are massive and served on a large round roll with a crusty shell and pillow-soft interior. Pinto beans, mayonnaise, lettuce and tomatoes accent your meat of choice, including that wonderfully seasoned carne asada. The only problem is that there are so many toppings it becomes a sloppy mess to eat, and the bread quickly gets overwhelmed by its contents once their juices begin to soak in and break it down — it just means you have to eat the tasty sandwich quickly. 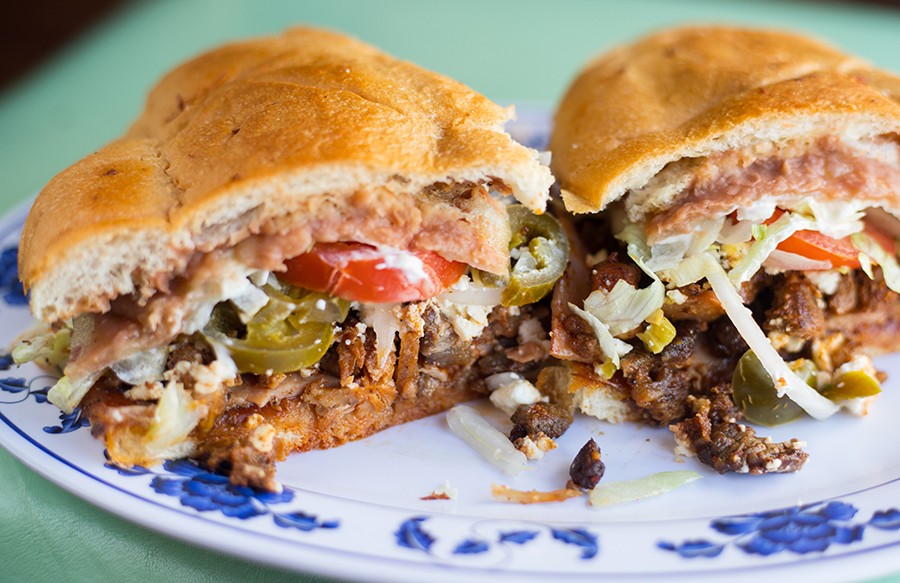 This is even more of an issue on the Cubana. Not to be mistaken for a Cuban, the Cubana is a Mexican sandwich that is basically an excuse to pile as much meat between two slices of bread as possible — and when that point has been reached, you pile on even more. Carnitas, ham, cut up hot dogs and cheese vie for space with the same condiments that come with the other tortas. Every bit six-inches thick, this monster of a sandwich is an eating competition waiting to happen.

Malintzi's menudo is an excellent rendition of the traditional Mexican soup. Tender tripe and hominy bob in a vibrant red chile broth that has the texture of silk. The cow stomach lining can sometimes get rubbery, but here, it is delicate and pairs beautifully with the broth's rich texture. Raw white onions, cilantro, lime and powdered oregano are served alongside the steaming bowl of soup and enliven its intense flavor with a bright punch.

Malintzi's owner gave me a look when I ordered this soup, making sure no less than three times that it was indeed what I wanted. When the cook delivered it to the table, she did so with a raised eyebrow not at all unlike the ones given by the restaurant's other patrons. After all, they don't get a lot of newbies wandering in off the street and ordering menudo every day. But those who do aren't newbies for long — and the next time they come in, they'll know exactly where to order.