If you ask the young men in the peppy, dexterous emo trio Lobby Boxer to list their influences, you get a mish-mash of styles and bands that wouldn't seem to sit easily together. In conversation, Zach Fendelman (guitar, lead vocals), Andrew Gurney (bass) and Max Sandza (drums) toss out nouns including Sunny Day Real Estate, death-core, "Bohemian Rhapsody" and Whitesnake.

There might not be a clear line connecting those musical dots, but the band makes a compelling Venn diagram. Emo demands soul-baring histrionics, and while hair-metal may be emo's machismo-soaked evil twin, Lobby Boxer borrows liberally from that genre's gear-locker of dramatic vocals and high-necked guitar solos. On Big Bucks, the band's new album, the commonality is a lack of restraint, in both the band's kitchen-sink approach and in the emotional weight of its performance. 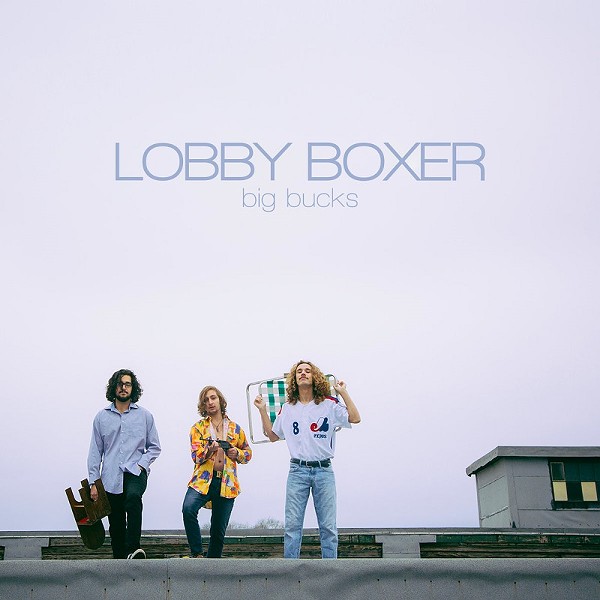 The members of Lobby Boxer are all juniors at Webster University — our conversation was scheduled as to not overlap with class schedules — and each is pursuing some facet of music as a major; Fendelman is studying music composition while his bandmates focus on audio production. That's a worthwhile footnote, as it underlines much of the precision and craft within these songs.

The simplest ones, like the lovestruck "Lover's Lane" or the love-sick "Leslie," are neatly contained pop songs that hew pretty close to convention — that is to say, they are simply arranged and smartly performed. The songs wouldn't be out of place alongside catchy, campy pop-radio hits.

But in corralling what Fendelman calls "a big smorgasbord of stuff" that inspires each musician, the band sought to contain its multitudes, however scattershot, on the new LP. Sandza notes that in making its first full-length (following a pair of EPs released in 2013 and 2014), Lobby Boxer took pains to stretch out. "This album is a lot less streamlined," he says. "Every song took a life of its own. It only further complicates the questions of 'what's your genre? What do we sound like?'"

"I Was Afraid of Tornadoes" blurs the edges between genres most aggressively, with its near-rockabilly opening riff that transmutes into a passable glam-metal tribute before settling into an uneasy swell of thrash-pop and high-drama emo. Like other songs on this album, the track feels like a piece of theater, a mid-album overture that almost serves as a five-minute C.V. of the band's stylistic shifts. Burney's bass guitar can elevate itself out of the low end with a well-placed pop or pluck, and when combined with Fendelman's high-flying vocals, comparisons to Rush aren't totally misplaced.

Lobby Boxer worked once again with producer Patrick Crecelius, who helmed its 2014 EP Teddy. But this time the recording took place at David Beeman's Native Sound studio, and the relatively luxurious recording process (done across seven non-consecutive days) was a creative boon compared with the previously rushed production schedule of earlier releases. Fendelman in particular took delight in the studio's collection of vintage organs and pianos, rounding out the band's power-trio sound with proggy lushness.

That freedom in the studio culminates in the eleven-minute "Christopher and Julius," the clearest distillation of the band's emo-pop revisions and its classic rock heritage. "The intent was to write an epic song," says Fendelman. "I rediscovered my love of classic rock over the summer. I was listening to a lot of 'Stairway to Heaven,' 'Bohemian Rhapsody,' 'Blinded by the Light.' I knew I wanted one epic song in it."

And yet for all its excess — each instrumentalist gets a solo in the song — "Christopher and Julius" is too dependent on pop dynamics and verse-chorus-verse conventions to rise to Fendelman's epic goal. Other songs on the album do more with less. But it's hard to knock a band this young and talented for its ambition, especially as it takes a few long-maligned genres and makes something brash, earnest and musically adroit. That ambition jumps off of the album after a cursory listen, and Lobby Boxer is taking its music on an early-spring tour — the trio will hit Cincinnati, Philadelphia, Brooklyn and Chicago in the first half of March.

Sandza credits local phenoms Foxing for not just reclaiming emo as a viable art form but for lifting all boats with its rising tide.

"The attention that they have gained has inspired a new wave of bands to not keep to themselves," says Sandza. "In general the music scene in St. Louis, you see a lot more bands coming out and embracing what they do now that St. Louis has a quote-unquote spotlight on it since Foxing has been touring the nation and the world."

"I feel cooped up in St. Louis right now, for one reason or another, and I'm really excited to go travel and play music," says Fendelman. "It's a surreal thing for people across the country to want you to come see you play."

Stream the new album in full below: