A year ends, a decade comes to a close, and the lure of easy summations and strict hierarchies is hard to resist. We fall into that trap every year about this time, using the weekly Homespun column — a place to tell the stories of St. Louis musicians through their songs, studios and stages — to collate a list of the stand-out albums and tracks from the previous twelve months.

We'll leave the top-line summaries to someone smarter or more foolhardy and simply note that with every year, the city's best musicians honor St. Louis' musical heritage by not being beholden to any one style. On this alphabetical list of nine albums and nine songs, local artists continue to do boundary-busting work by reaching across stylistic strictures to create something as diverse and amorphous as the city itself.

Kalyn McNeil, who makes invasive, sensual R&B under the name Bloom, knows how to set the mood. Her songs ripple like pinpricks across the skin, and the relatively unadorned production places due emphasis on her expressive, octave-spanning voice. In a Bloom song, feelings are magnified to the cellular level. And on her second album, Colors, McNeil uses her music to explore love, motherhood and body positivity, but not until the booming, cratering opening track “Go Crazy” starts the album with a cathartic fracture.

Beth Bombara has been making records long enough for her career to have phases and moods. If 2017’s Map and No Direction was ruminative on personal fulfillment and general anxiety, this year’s Evergreen finds her back on the sunny side of the street. Her current line-up is her best yet, with guitarist Sam Gregg transmitting the bluesy and twangy “Tenderhearted” is a song about fidelity -- to one’s partner in love and life, certainly, but to your artistic dreams as well. Bombara sings to her subject that he has “turned your back on the back-up plan” as her band rides a descending lick to its terminal point, as if to underline the whole operation.

Siblings Cory and Cody Perkins share the spotlight in the propulsive synth-pop quartet Bounce House. She plays keys, he plays drums, but they work together to make up the whole of their spazzy song on the band’s first release, Starter Home. "On&On" serves as the apotheosis of Bounce House's sound. A rattling bassline gives a nod to the players' roots in punk rock while the kaleidoscopic synths give a new range of color, and the Perkins siblings' competing vocals seem to offer two versions of the same story. But immediately following "On&On" comes the slower, slinkier "Distort Yourself," which places the groove back onto the drum kit and suggests a sizzle where the rest of the EP pops. 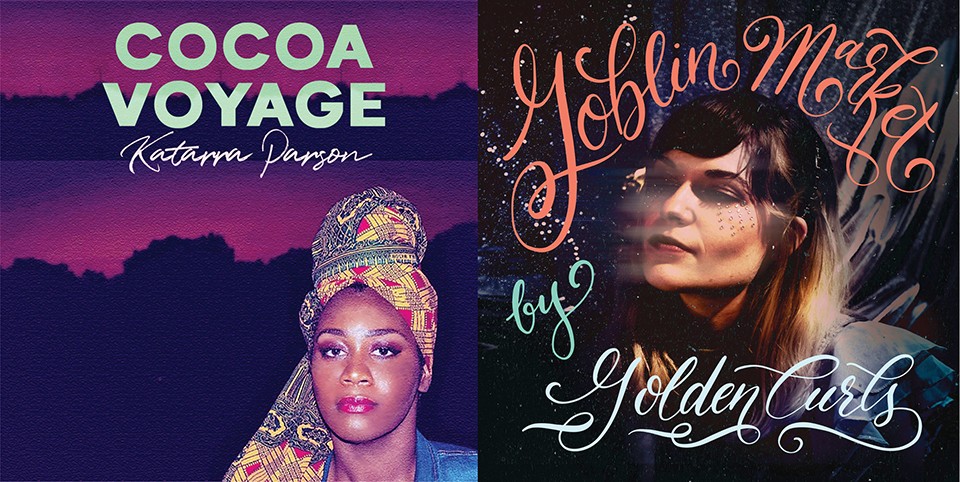 Katarra Parson went from a shy pianist with near-debilitating stage fright to one of the city’s most talked-about vocalists and musicians in just a few years’ time. Her debut album, Cocoa Voyage, sounds like a synthesis of a short lifetime of musical influences: rich gospel piano chords, jazzily scatted vocal runs and propulsive hip-hop beats fade in and out. Many of those textures pop up on standout track "Conversation Golden" — silky synths swirl against a squelchy bass line, but only after a clacky upright piano and a virtual choir of Katarras introduce the song with a celestial air.

The local whimsy-folk quintet revels in the entrancing oddness and participatory nature of its theatrical live shows, but its full-length debut proves that Shane Devine’s songs can stand alone. He counts Harry Nilsson, Van Dyke Parks and Smile-era Brian Wilson as inspiration for this project. And those influences come through on the first single "Green Lemon Buggy," a song that marries two of the band's key fixations: food and travel. In it, Devine envisions an automobile made up of comestibles, traipsing over wordplay ("cucumber bumper," "celery accelerator") several times a verse. The song travels on the back of a wheezy melodica and some Spike Jones-esque marimba, and while it sounds fleetingly familiar, the Opera Bell Band succeeds in being impossible to pin down.

The year’s most long-awaited album may also be its best: Goblin Market delivers on the promise and scope of Golden Curls’ earliest recordings and recent live shows with an immaculate, intricate collection of songs. Singer and synthesist Sarah Downen draws inspiration from folk tales and fairy stories while bristling against simple and pat lessons. Her songs are fantastical in their source material but almost always rooted in earthen emotion. And along with drummer Philip Zahnd and guitarist Stephen Favazza, Downen coats her songs with richly textured dream-pop and gossamer, plangeant synthesizer washes.

Nelson Jones and Brian Scheffer are co-owners of Firebrand Studio, a North County destination that is so frequently booked that the pair’s own band, MotherFather, finally released its long-awaited debut in 2019. The self-titled album is a pristine-sounding document of the band's post-rock inclinations, where Jones' and Eli Hindman's guitars duel in melodic and textural counterpoint through songs that can recall math-rock intricacies as easily as the swelling grandeur of Explosions in the Sky. Behind the guitars, bassist Scheffer and drummer Tim Hardy lock in to corral the shifting tides of the songs.

Madison Price uses little more than a tiny Korg synthesizer and a notebook full of observant lyrics to cast a wide net on her first full-length. The slinky and smokey "King Cobra" is a song about a caddish playboy that exposes the sliminess of dickish dudes — kind of a "Smooth Operator" relocated to Cherokee Street. The slow and swirling "Dry Up" takes a more personal and vulnerable look at busted relationships and the role that addictions play in deepening those fissure. Album closer "Enough" is Sister Wizzard's take on an empowerment anthem — Price calls it her Lizzo-inspired "bad bitch" moment and envisioned crowds chanting its chorus back at her as she wrote it. The song also serves as a capstone to the eight-track album.

In-demand keyboardist and sideman Jesse Gannon created the portmanteau "soulphistipop" to represent his mix of soulful, sophisticated pop music. He cites legends like Quincy Jones, Curtis Mayfield and George Duke as influences and exemplars of the form, but plenty of the vibes on his new EP — his first solo release in five years — owe a debt to hip-hop and sample culture. Local emcee Thelonious Kryptonite guests on the track "Doctor Spin," and a host of local soul and jazz phenoms (Jharis Yokley and Dhoruba Shakur on drums, Teddy Brookins and Bob DeBoo on bass) support Gannon's work on acoustic piano, Fender Rhodes and analog synth.

Al Holliday and his East Side Rhythm Band undertook a big and noble project in 2019: serve as the backing band for a host of this city’s best soul and R&B singers, offering a unified sound and production aesthetic to some of St. Louis’ best voices, like Brian Owens, Emily Wallace and Roland Johnson. But it’s Holliday’s sole lead vocal performance that resonated the most. He interprets Nathan Jatcko’s composition, "Bittersweet Home Chicago," with soul and sensitivity. The slow, celestial blues number serves as a farewell to Jatcko, a talented pianist, composer and sideman who died in 2018. “That song is gonna be good for over a hundred years,” Holliday noted. “It's a beautifully written standard.”

For the Fragile Heart EP, Cara Louise Wegener doesn't totally throw away her fascination with roots music; rather, she and her band stretch elements of the genre toward the moody and cinematic. "Tears Turn Into Rain" lopes along like a country waltz, and it could certainly have maintained its winsome cowpoke rhythm without much adornment. But the layering of a beautifully nuanced string section lends the song an air of eternal dusk, and Wegener's layered vocal harmonies soften the existential dread that creeps into her increasingly impassioned lead vocals.

You’ll hear the influence of Tom Pini throughout this year’s best-of list: his production work aided the albums of Sister Wizzard and Golden Curls, but his electro-soul trio Drangus pumped out a dark, sensual and danceable EP called Love, Dust to Dust amid the band members’ other projects. It’s hard not to love a song named after the South Grand coffee shop known for its come-one, come-all spirit as well as its killer Sunday brunch, but here it sounds like Pini’s life has been measured out in coffee spoons and soundtracked by disco drums and florid sax solos.

Andy Puechner has been making small, finely wrought and smartly tuneful indie rock songs as Dutch Courage for a few years, putting out small-batch cassette releases every so often. “Another First Son” serves as the title track to his latest three-track offering, and it tells a tale of progeny, destiny and family lineage. The scope is both grand and intimate: He feels the weight of the family name amid allusions to prophets and sages, but couches his decision to end the family line amid a resonant drone and bright guitar lines in a way that sounds like a triumph of self-actualization.

Lean To, Lisa Houdei’s third album as Le’Ponds, is largely reflective and acoustic, allowing her voice to rise and fall against circular guitar patterns and bucolic images. She has settled into a lower register than on her first recording, Heat, and has — for the moment, at least — retreated from the full-band thrum of last year's I Was Dancing with My Dream Team. “Quail Ridge” is the EP’s ruminative centerpiece, a projection of an idealized existence for Houdei, one of natural solitude and self-sufficiency.

Gary Schmidt took the long road to make his three-song EP, Pastry Police, under the name Macaroon Afterparty. I mean that literally; he made several trips to Ohio to record with members of the indie band Pomegranates. The pristine, reverberant production on opening track “Feel Right” suggests that all those road trips paid off. The track is both moody and slick, giving Schmidt space to work in a nimble falsetto run.

Son of the Pale Youth, “Age of Reason”

Having grasped the brass ring of mid-level indie-rock fame with American Wrestlers -- national tours, respected label, blog buzz -- Gary McClure shelved that raucous quartet to make music of a nearly ascetic quality. Son of the Pale Youth began with just McClure’s high tenor voice and a clean electric guitar; successive recordings in 2019, which included local drummer Mic Boshans and McClure’s former bandmate Phil Kay, pushed into the avant-garde, but “Age of Reason” stems from his earliest iteration. The track illuminates McClure’s innate melodic gifts and the beauty that comes from leaving them unadorned.

The moody and atmospheric quintet Thames is old enough to have a few EPs under its belt and young enough to make dramatic shifts with each release. Its debut full-length Spotlight finds the band in a place where it is comfortable with rock dynamics but more eager to play with atypical rhythms and moody keyboards. On the title track, singer and guitarist Gabriel Jackson's voice shows a sensitivity and guilelessness that helps sell some of the more emotionally loaded lyrics.

Tonina Saputo’s melting-pot approach to jazz, pop and R&B has taken her to a few European ports of call over the past few years, but 2019’s St. Lost is a nod to her hometown and a sampler of the many styles she encompasses. “Mercy” starts out simply, with a lilting waltz tempo and delicate acoustic guitar giving ample canvas for her ebb-and-flow delivery, but at the halfway point, Saputo’s upright bass asserts itself with a nimble, off-kilter figure before David Gomez’s tenor saxophone takes flight.