Tim Pieri's passion for pizza goes far beyond a hobby, a job or even a love affair. It's his life's calling, a journey that started some 35 years ago with his first gig in the restaurant business, manning the ovens at the beloved Rossino's (may it rest in peace). Everything about the long-shuttered Central West End spot spoke to him — the pizza, the warm aroma of roasted garlic and Parmesan that perfumed the air, the old-school, dimly lit atmosphere. In his mind, it was everything a restaurant should be.

Even when he moved to Key West as a young adult, Pieri could not shake the pizza bug. Instead of landing a job at a beach bar or seafood shack, he found himself at a pizzeria, working there to perfect his craft before returning to St. Louis to jump back into the city's restaurant scene.

Though he was primed for a career in the pizza business, his life took a detour when, after returning home, he got a job managing the legendary downtown restaurant and nightclub Harry's Restaurant & Bar. After ten years, he became a 49 percent owner of the massive operation and ran the place for another fifteen before it served its last customers in 2016.

Through it all, Pieri's passion for pie never faded. In fact, he was so enamored with St. Louis-style pizza that he set out to write a book on the subject. His research took him to nearly every pizzeria in the St. Louis area — 70 restaurants in total — and made him an expert in all things Provel. 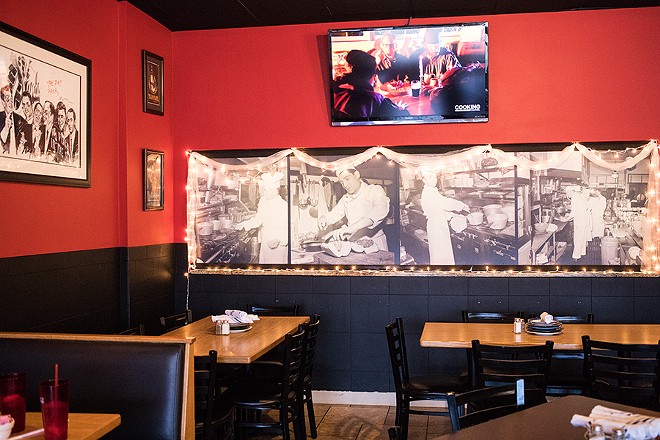 Pieri never wrote his book, but the pizza knowledge did not go to waste. Instead, he applies it every day as the proprietor and chief pizzamaker at his south-county restaurant, Liliana's Italian Kitchen. The low-key, family-friendly pizzeria is quite a jump from the nightlife hotspot that Pieri ran for a quarter of a decade — and that is precisely why he opened it.

Though he loved his time at Harry's, Pieri never quite shook his vision for a restaurant inspired by his first days in the business at Rossino's. As he explains it, running a large operation like Harry's took him away from why he fell in love with the business in the first place; instead of focusing on people, he ended up focusing on numbers and felt the grind of having to do high volume in order to make ends meet. He vowed that his new place would get him back to the elements of the business he felt were most important: genuine hospitality, comfort and getting to know his guests.

To affirm his commitment, Pieri named Liliana's after his daughter and created a menu based not only on his pizza research but on old family recipes. He took pains to get the atmosphere just right, doing his best to warm up a nondescript strip-mall storefront in deep south county. Black-and-white photographs and brass-framed vintage-looking mirrors hang from the cherry-red walls. Wooden tables and chairs and black leather banquettes comprise the seating on one side of the restaurant; on the other, Pieri created an open kitchen that evokes an Italian deli counter on the Hill.

And then there is that delicious smell.

Anyone who has dined at an old-fashioned Italian-American restaurant — whether Rossino's or anywhere else — knows that scent: a mix of garlic, dough and the powdered Parmesan cheese that comes in shakers. It warms your soul like an electric blanket. Add to this the gentle heat that radiates from the pizza ovens at Liliana's, and you can feel your shoulders relax a little the moment you walk in the door.

That intoxicating siren song of scent is a precursor for what's to come, which really ought to begin with an order of cheese garlic bread. Simply spreading butter on bread is not enough for Pieri. Instead, he dips sesame-seed-flecked crusty Italian bread into a concoction of melted butter, garlic and Parmesan, then covers it in mozzarella cheese before placing it in the oven. The result is a cheesy, butter-saturated wonder, the epitome of comfort.

Housemade meatballs are equally dazzling. The tender, garlic-studded spheres of beef may not be quite as big as a baseball, but they aren't far off. Pieri pairs them with a rich tomato sauce that is decidedly less acidic than what is typically served at local red-sauce joints. If you haven't devoured your garlic bread before the meatballs arrive, you can use it to make a sauce-soaked mini-meatball sub. What more do you want out of life?

Liliana's calamari is conceptually good — crispy breading, spicy aioli as a condiment and fried spinach as a garnish. However, the squid was very chewy. I opted to skip it after a few bites and focus instead on the delightfully delicate spinach.

Pieri's soft spot for Italian-American tropes results in an entire section of the menu devoted to sandwiches named after characters from The Sopranos. The "Tony" is an Italian deli-style version of the quintessential roast beef and cheddar. Thinly sliced house-roasted beef is layered with sharp cheese, then amped up by peppery arugula and spicy aioli. Pieri adds crisped bacon for good measure, giving the sandwich salt, smoke and crunch.

The "Don" takes that same roast beef and bacon, then adds pastrami and roasted turkey to the mix. Shockingly, the sandwich is not as overwhelming as it sounds, its meatiness mitigated by the spice and vinegar of housemade giardiniera. Pieri piles on spicy aioli, garlic mayonnaise and provolone, but again, he is restrained in his use of toppings so that no one flavor overtakes it. It's just a well-balanced, albeit hearty, Italian sub.

Entrees at Liliana's are exactly what you'd expect from this kind of restaurant. They are also exactly what you want. Lasagna is perfection of the form: a mammoth square of noodles, hearty meat sauce and cheese. It oozes a glorious molten, tomato-laden cheese goo with each forkful. 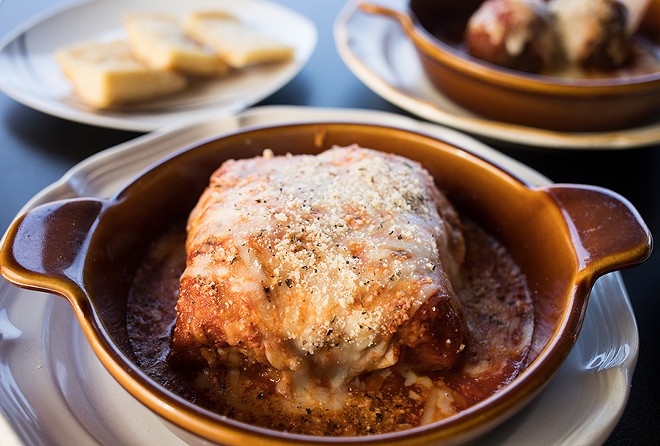 As enamored as I was with this dish, the eggplant "lasagna" sent me over the moon. Though the name suggests otherwise, there are no noodles — just pure, creamy eggplant that is so flawlessly cooked it melts on the tongue. Layers upon layers of the vegetable are stacked with cheese and tomato-basil sauce — a dish that must be painstaking to make but pays off tenfold in taste.

I was less impressed with the chicken spedini and its accompanying pasta. Both the spedini, which was rolled with bacon and spinach, and the accompanying garlic cream sauce rigatoni were flat and needed some sort of acid or spice to brighten them.

The only thing that could improve the pizza, however, is if Pieri relocated the restaurant closer to my house. Perhaps it's best that I have to drive 30 minutes to enjoy it, though, lest I eat it morning, noon and night. Pieri's extensive research into St. Louis-style pizza has resulted in the city's best version of the dish. The crust is key — thin and flaky, yet substantial enough to hold up to the sauce, cheese and toppings. What's especially impressive is that there is no sogginess in the center; you still get that middle-piece goo from the cheese and sauce, but the crust doesn't bow under the pressure. It's a masterpiece of pizza engineering. (Pieri credits a friend who prefers not to be named for making the shells.)

The crust proves the perfect base for Pieri's bright tomato sauce, which hits the perfect balance of sweet, salt and garlic. He uses Provel, but he mixes it with mozzarella so you get the goo without the pastiness the processed cheese can sometimes yield. It doesn't matter whether you get one of Pieri's specialty versions — like a hearty "Meat Lovers" covered with hamburger, bacon, sausage and pepperoni, or a white sauce "Veggie Delight" teeming with a garden's worth of fresh veggies and pungent goat cheese — or just a simple pepperoni pie. The crust, sauce and cheese are such a solid foundation, there is no way you can go wrong.

Pieri muses that he still has that book in him, and one day, he just may write it — that is, once he can catch a breath from taking care of his growing legion of loyal fans. Liliana's is perpetually busy, and it's not just the dining room. Pieri created a drive-thru carryout window for guests to pick up his magnificent pizza without having to get out of their cars. It's yet another thoughtful touch from a man who may not yet be an author, but who, with this charming restaurant, has nevertheless written the book on St. Louis-style pizza.