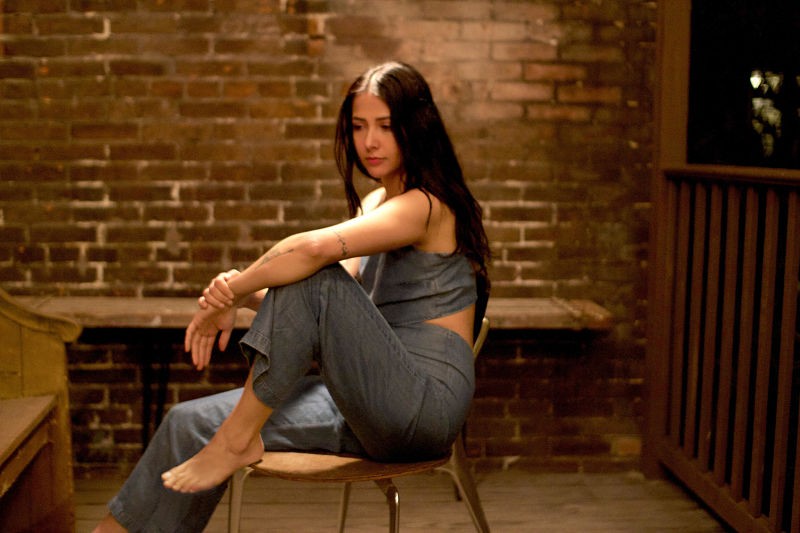 On the first truly cold weekend in December, Lisa Houdei cultivated her own warmth on the eastern edge of Cherokee's antique district. In a room behind Dead Wax Records, Houdei threw a release show for Heat, her seven-song album released under the name LéPonds. There, in front of wooden racks crammed with overstock LPs, Houdei and a handful of backing musicians performed a set of gentle, woozy songs that married folk roots with electronic set-dressing— the kind of music created by a $150 guitar and a $2,000 synthesizer. While Houdei is just starting to promote this project, the release show was hotly tipped enough to sell out its initial performance. A second set, also well-attended, was necessary.

"We wanted somewhere small and a little different," says Houdei a month after the release show. "I was afraid that maybe I couldn't fill a room or whatever."

It was an intimate setting with an ad-hoc P.A. system being manned by engineer Tim Gebauer, who recorded and performed on the album at his Electropolis Studio. Together, Houdei and Gebauer have taken these spare, sometimes shapeless songs and outfitted them with a mix of acoustic and electronic instruments that keep focus on Houdei's placid vocals.

"Tim brought in stuff that I never thought about, and I brought in stuff that he never thought about — that was my first time producing with someone else and it was the best time ever," says Houdei. "Two songs, 'Please' and 'Fervor' — those songs I wrote on an acoustic guitar, but we totally decided to nix the guitars and he played synth on them, and that made it this whole other thing."

Indeed, "Please," the album's opening track, largely ignores acoustic guitar and opens with the gentle wheeze of a pump organ. It builds with soft synth arpeggios and a delicately fingerpicked guitar pattern; the arrangement sets a mood that can feel both weightless and kinetic.

Houdei, 26, grew up in Defiance, Missouri, and later moved with her family to St. Charles County; after briefly attending the University of Missouri-St. Louis, she has lived in St. Louis city. It was about that same time that she picked up a guitar and started writing songs.

"My dad made me get a guitar because he was in a band when he was younger — he was a jazz bassist," says Houdei. "He said, 'You have to learn an instrument.' I got the guitar when I was thirteen. When I was nineteen I wrote my first song, and from there I started writing a little bit more and more."

Houdei has been writing, making home recordings and performing (both as LéPonds and under her own name) for a few years, though Heat is her first official release. These seven songs came in quick succession, she says, which may help explain the sustained mood that is established, where songs seem to float into one another and commingle in the same strummy breeze.

"I have so many songs," continues Houdei. "It started out as singer-songwriter, little simple stuff, and then I started going toward a folk or twangy country sound. It was super cool, but it was not the sound I wanted. Whenever I started experimenting with my sound I would record it myself, and I would do my guitar and then electronic stuff with it. So I wanted to go back to that because it's more organic to me."

That "electronic stuff" comes through some gentle synth washes and the occasional percussive thump, though on the track "Fervor" (one of the few guitar-free moments on the disc), Gebauer's synth work creates undulating waves that leaves Houdei's voice largely unmoored. But perhaps the most distinct tone on the album – a zippy, pixelated riff that opens the song "Shove" – came from some playful late-night experimenting in the studio.

"One night I was a little drunk and playing a kazoo, and I was playing what I would want a guitar solo to be on 'Shove,'" says Houdei. "So we Auto-Tuned it and put a beat behind it; we were dying laughing."

While she threw together a backing band for the release show, Houdei is playing solo for now. And after years of under-the-radar gigs, she is now ready for LéPonds to play in and out of town.

"I'm finally confident on stage now," says Houdei. "Since that [release] show I just want to play more, since I am more comfortable now. I want to get it out of St. Louis a bit and see if somebody thinks it's cool or not. I already started writing new songs, and I want to keep going."