The Rehabbers Who Saved Lafayette Square

50 years ago, when most of St. Louis wrote off the neighborhood, a band of DIY risk-takers dared to bet on its future

When Martha Rose Greer-Green moved from Texas to Lafayette Square in 1970, her mother had some tart words about her decision: "People move away from St. Louis, they don't move there." That was the perception at the time even within the metro area. Once you could, you headed to the suburbs. You did not put down roots in a neighborhood that was filled with the neglect of disinvestment, aging structures and a population considered rough and tumble.

Indeed, Greer-Green moved to the historic neighborhood just southwest of downtown at a time when it had fallen so far, the only way to go was up. The grand old Victorians that once held St. Louis' most eminent citizens had been subdivided, abandoned or, in some cases, turned into flophouses. There were shells all over the neighborhood's 218 acres, and you could buy one for a song — $3,000, even $1,000. Demand was that low.

"When, in the late 1960s, bright, young, ambitious professionals began buying derelict properties in the Square, they often did so against the wishes of their families, who feared for their safety and questioned their sanity," notes neighborhood historian Mike Jones, who maintains lafayettesquare.org/archives. "Lafayette Square was known as Slum D in city plat maps in 1950." Adding to the sense that the neighborhood was a poor investment, the long-discussed North/South Distributor highway was slated to cut through its eastern end. It wasn't until the 1980s that the threat was extinguished and the Square left its state of limbo.

Yet even at the time of Greer-Green's arrival, there were signs of new life, indications that someone cared about these houses and this neighborhood. The Lafayette Square Restoration Committee, an organization with a mission as straightforward as its name suggests, was founded in 1969 and began hosting house tours in its very first year.

The restoration movement wasn't organized on any official level, and no governmental assistance was at its root. It was the result of individual buyers purchasing single properties, perhaps moving onto a second, but certainly not buying them as entire blocks or via big parcels. In that, it represents the best qualities of small-scale redevelopment, with buyers coming in the exact moment that prices hit an absolute low, bringing the equity of sweat and tears. Laughs Houston Smith, a past president of the restoration committee who moved to the Square in 2000, "[You] would buy a house with no roof, a tree growing through the third floor. You'd spend $6,000 and then the rest of your life trying to rehab this thing."

Fifty years later, just about everything has changed in Lafayette Square. In December, a single-family home sold for $1 million, and while plenty of rentals and more affordable townhouses remain, listings in the $600,000 and $700,000 range are common. And it's not just the adventurous and the child-free who have taken up residence. There are strollers everywhere these days, so many that the neighborhood's charter school, Lafayette Prep, has a major expansion underway and the shared neighborhood pool has a waiting list rumored to be approaching the five-year mark. "It's quite a popular option for residents," Smith says.

This weekend, hundreds of visitors will arrive to take part in the Restoration Committee's annual spring tour. They'll pay $25 to tour a selection of the neighborhood's homes and gardens — a good percentage likely unaware that many St. Louisans once wrote off the neighborhood as a lost cause, and never thinking of the band of pioneers who proved them wrong. 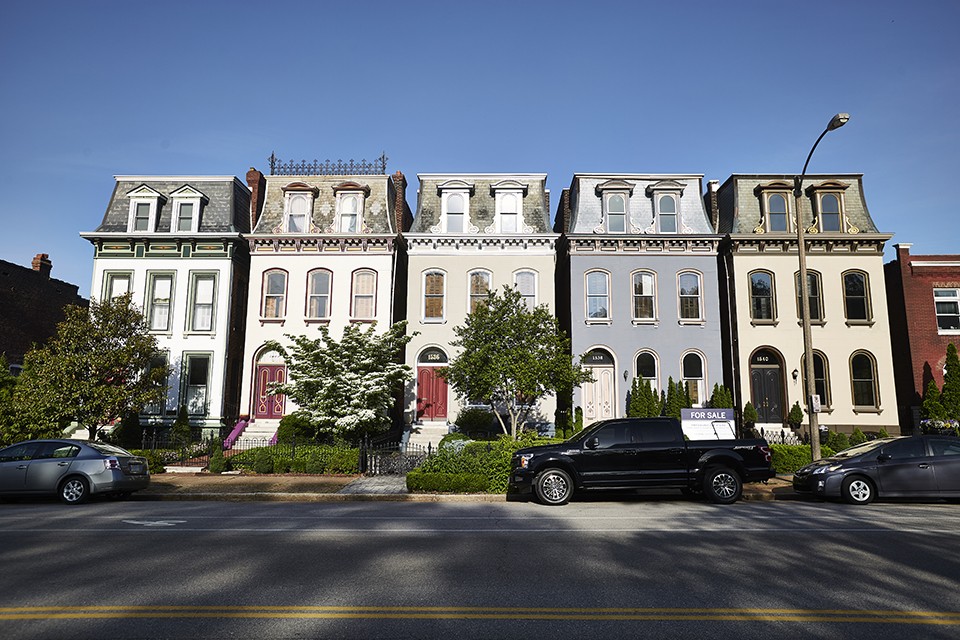 As a young expat from Texas, Martha Greer-Green came here to take part in a communally owned-and-run building on Mississippi Avenue, though that project would sink about six months after her arrival. She would come to call several places in the neighborhood home.

"I had two friends who talked me into coming up and working on this house," she recalls. "I didn't have any other connection, but these were my best friends at the time. And I thought, 'Why not?'"

There were a few reasons, not that she heeded them.

By the time of her arrival, the neighborhood was already a full century removed from its early days as the home to St. Louis' elite, then living along what was considered the western edge of the city. The neighborhood built itself around the first park west of the Mississippi, dedicated in 1836. Two- and three-story homes constructed with exceptional detail cropped up in all four directions in what seemed like breathing-room distance from the city's commercial center downtown.

But in 1896, the "Great Cyclone" tore through the neighborhood, devastating many structures. And if that wasn't a near-fatal blow, the Depression would be. By the '30s, many once grand homes were converted to rooming houses.

Jones, the neighborhood historian, dates interest in restoration to architect John Albury Bryant, who purchased a home on Benton Place in 1945. But it took a few decades for a movement to catch up with him — in Jones' telling, it was galvanized by the destruction of a mansion at Mississippi and Kennett.

By the time Greer-Green arrived, rehabbers had already begun the hard work of restoring the neighborhood's biggest homes, brick by brick. Wrote author Tim Conley in Lafayette Square: An Urban Renaissance, published in 1974, "It will be some time before the park, the broad avenues, and the surrounding townhouses reflect their original appearance, but the vast majority of the homes near the pleasant vista of the park are already undergoing extensive rejuvenation."

Added Conley, "The families that occupy these residences represent a broad spectrum of St. Louis' population. They are bound, not just by an eccentric love for brick and mortar, for high ceilings and beautiful casework, but also by their determination to renew this unique neighborhood ..."

"Unique" is one adjective. Greer-Green has another.

"It was more sketchy then," she says, with some understatement. "Some of the locals were pretty rough."

In many ways, it was that life you dream of — rent was cheap and Greer-Green walked to her job at the nearby Malcolm Bliss mental health facility. In other ways, it was less of a dream:

"At Gratton and Park there was a tire shop. I rented the upstairs unit. At that point, I thought it was filled with potential, very little of which I could actualize," she recalls. "When I got there, there was no hot water and when I went to the landlord, they seemed to think that was normal. Here I am from Irving, Texas. I expected hot water, so he did get me a hot water heater. That was my first battle, so to speak."

In addition to what she was finding inside her new apartment, there was fascinating activity outside it. "My friends were working with the neighborhood association," she says. "They were social-work-inclined and wanted to be a part of the neighborhood, but not kick people out." She recalls noticing a neighbor one day walking down the street in an agitated state and holding a gun. Looking back on the situation, she laughs a bit at her pluck, as she went over, talked to the man and helped resolve the situation peacefully. That was one occasion. More often, there was a general sense of the community falling a bit apart at the edges, at least in terms of personal safety.

Even in her second-floor apartment, she says, "I had fears. I would sleep with my purse in my bed, keys out. Nothing really ever happened to me, but there was an aura I felt there, though that can sound silly."

Eventually, Greer-Green returned to Texas, but it was a short-lived trip that simply stirred up the emotions she had felt in St. Louis. So she returned. Though it's hard to define, there was an energy she felt drawn to, a spirit coming into being within cities all across the country.

"It was like a tapestry," she offers. "There were a lot of layers that one could experience at different times. Sometimes there was a volatile energy, it was unpredictable and dangerous. Other times, you felt the idealism, the freeness, new challenges and changes and transformation. I think all of those things were there. St. Louis is so old that you can feel the energy, questionable or not. In Lafayette Square, it was there. When people started rehabbing there, you had artists. The gay community was strong. People had different ideas of what they wanted in life."

Asked if she misses that moment in time, Greer-Green answers quickly.

"You know what," she says, "it's random. I do still think about it, as it was so formative. Yes, I was in my twenties. I wasn't moving there at 16 or 21. I was 26 and an adult or on the verge of that. It did kind of consolidate my values in some ways. There was still a '60s hangover happening, there was talk of The Man, talk of the corporate world. I was never a big fighter against the system, but I knew that I didn't want a certain life. I knew I didn't have to have all of that."

When her mother tried to warn her off from St. Louis, she understood the point. "I knew what she meant, but she didn't know St. Louis. I was in a fast-growing town, Irving, Texas, the original home of the Cowboys. It wasn't completely country, but it really was on some level. Here, everything was vertical, these red-and-green structures, with red-and-green trim. I missed the Texas horizon. But I sure did love St. Louis."

She has called St. Louis home since, though she now lives in Benton Park, a neighborhood that, in some ways, mirrors the relaxed, freewheeling spirit of the earlier Square.