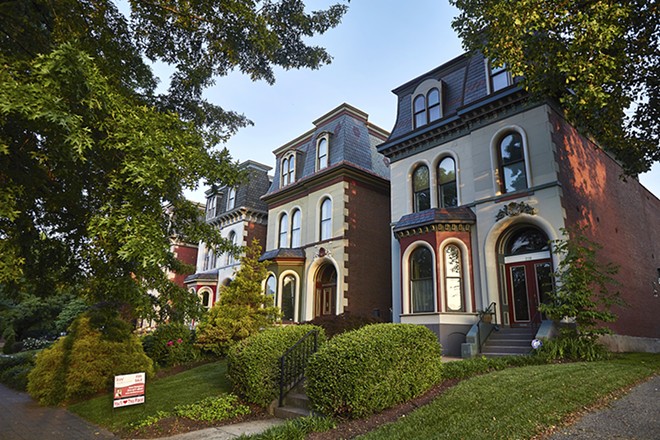 1836: Lafayette Park is platted, the first public park west of the Mississippi River.

1896: The Great Cyclone tears through the neighborhood; many residents relocate.

1923: A new city ordinance allows for commercial and multi-family units around the park.

1969: The first Lafayette Square House Tour is held. Tickets, priced at $1, are comped back by the Lafayette Square Restoration Committee if the purchaser also bought a house to go along with the ticket.

1970: With the demolition of the Barlow Mansion (at Mississippi and Kennett), the Lafayette Square Restoration Committee becomes official. (OGs, to this day, debate the exact year and nature of the committee's formation; we're deferring to the call of the nabe's official historian, Mike Jones.)

1973: Federal protection for the Square comes with placement on the National Register of Historic Places.

1981: With the election of three-term Mayor Vince Schoemehl, the long-discussed North/South Distributor/Route 755 is considered dead, after existing in draft forms since the Comprehensive City Plan of 1947. With the plan ceased, developers who were land-banking buildings in hopes of a government buyout open up their holdings to rehabbers.

1987: City Hospital #1 closes (it's given National Register of Historic Places status in 2001). Gilded Age LLC would develop the largest share of the property into The Georgian in 2005. Work on the site continues in 2019.

1999: Demolition of the Darst-Webbe housing projects commences east of the Square.

2001: SqWires Restaurant anchors a large residential and commercial development in a former wire factory, giving the neighborhood a significant destination restaurant and a catalyst for further food-and-beverage development.

2019: A handful of major projects are slated to open this year, or soon thereafter. Included in the ranks: Lafayette Reserve, which involves fourteen townhomes; the Bordeaux Apartments, 50 apartments in an early 1900s space; the LaSalle Apartments, including 34 new two-story apartments and six ground-level commercial spaces; and the Chouteau Partnership, to be filled with a potential hotel, high-end apartments, restaurant and retail.

– with thanks to neighborhood historian Mike Jones