PATRICK HUBER Aaron and Stacy (Shane Signorino and Colleen Backer) are on a horrific first date.

Presented by St. Louis Actors' Studio through July 28 at the Gaslight Theater (358 North Boyle Avenue; www.stlas.org). Tickets are $30 to $35.

Let's come out and say it plainly: You need to go see the first half of the LaBute New Theater Festival this weekend. St. Louis Actors' Studio's long-running partnership with playwright/director Neil LaBute is always worth your time, but this year, a new bar has been set. The four plays in the first half of this year's festival are provocative, invigorating theater, presented at a fever pitch. There are big ideas, clever scripts and top-notch performances across the board.

LaBute's own "Great Negro Works of Art," directed by John Pierson, opens the evening with a catastrophe. Jerri and Tom meet at an art gallery for a blind date. Tom (Jaz Tucker) is black and late; Jerri (Carly Rosenbaum) is white and "woke." It's a dangerous combination for a self-assured young woman who doesn't understand the difference between saying "I'm woke" and actually knowing what racism really looks and sounds like. Jerri finds the gallery's painted lawn jockeys "cute," which baffles Tom. His explanation of the racist history behind them puts her on the defensive, and her stated love for "black artists" results in a painful, embarrassing line of questioning that ends with Tom affirming that, yes, Picasso was white. The more they try to engage honestly with each other, the more contentious their date becomes. "No more 'sorries' between us," Jerri promises at one point. "We've got to move on." 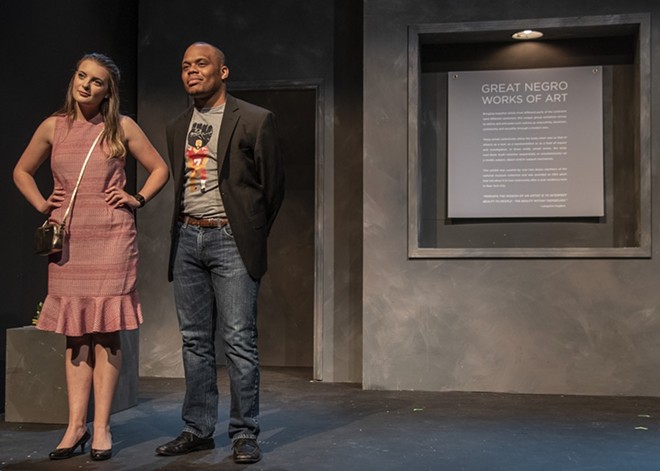 LaBute's script hums along with blind malice, as Jerri piles on unintended insults and then is deeply hurt when Tom calls her on racist thinking. Rosenbaum is excellent as the blithely awful Jerri, while Tucker slowly crumbles under another assault on his intelligence, dignity and basic humanity.

Michael E. Long's "Color Timer" is also about an ill-fated first date. Stacy (Colleen Backer) works on the technical side of reality TV and has a florid vocabulary, which she delivers at machine-gun speed. Aaron (Shane Signorino) is a quiet, carefully spoken psychologist overwhelmed by the torrent of words pouring out at him. When Stacy tells him she's drawn a gun and will kill him if he leaves, then open fire on the other restaurant patrons, Aaron is stunned and wants to know why. Well, because Stacy wants an engaging conversation, and she believes high-stress situations focus the mind to a state of genius.

Backer is charming and witty and downright conversational throughout, while Signorino conveys the stillness of a man caught in a slow-motion, familiar nightmare. Director Jenny Smith barely gives you time to breathe, which keeps you in suspense until the end. Then Long's script clonks you over the head and puts a bullet in your heart. It's an exhilarating play.

"Privilege," by Joe Sutton, is something of a legal thriller. Law student Peter White (Spencer Sickmann) is undergoing the character examination portion of the bar system. Questioned at length by an unseen panel about his family and whom exactly he's related to, Peter remains calm. In a subsequent meeting with his Uncle Mark (Chuck Brinkley), he's anything but. Rattled by the determined barrage of questions about his father's side of the family — almost all of them are lawyers — he discovers a family crime that's been kept from him. The character exam and his investigation into what happens are interspliced, but director Jenny Smith divides the stage in thirds, each third clearly defined by what happens in that space. The title is a bit of a puzzler, until Uncle Mark points out that Peter didn't have the grades to go to law school, yet here he is. Many members of the White family have had strings pulled on their behalf, both to get them where they are and then to keep them there; Peter never questioned the benefits he reaped. It's a sharp piece of theater, well-realized by Sickmann and the cast, which also includes Shane Signorino and Carly Rosenbaum.

As is unofficial tradition, the evening ends with a comedy. Carter W. Lewis' "Kim Jong Rosemary" is about a tired and angry single mom, Rhonda, played by Jenny Smith, and her gender-fluid child, Beth (Eli Hurwitz, who uses they/them pronouns in their normal life). Rhonda enters wheeling a massive, bulky sack, which she declares is her anger. This is your first clue that Lewis is going off the map into meta territory, a suspicion confirmed when a character named Carter W. Lewis, "a pansexual, gender-neutral performer" played by Colleen Backer, enters the play and starts explaining what Lewis the playwright is trying to do here. "I wanted to write a play about the current popularity of anger, specifically women's anger," Lewis/Backer begins.

This statement sets off a philosophical and metaphysical conversation between the characters about the appropriation of women's anger by a white man, the sources of that anger and a surprise declaration from Lewis/Backer that the playwright "sounds like an asshole." Rhonda and Beth level Lewis/Backer a tough-but-fair punishment, and then Rhonda tenderly explains to Beth that despite the beliefs of the young, things won't get better in their lifetimes. Women have a hard road in America, and improvements come slowly (and are occasionally snatched back by theocratic white congressmen). It will take generations of conscientious action by people like Beth to make change, and you must proceed knowing you won't see the results. Lewis' ambitious and funny script is beautifully handled by the cast and director John Pierson. It's a perfect finale to an evening of essentially flawless live theater.