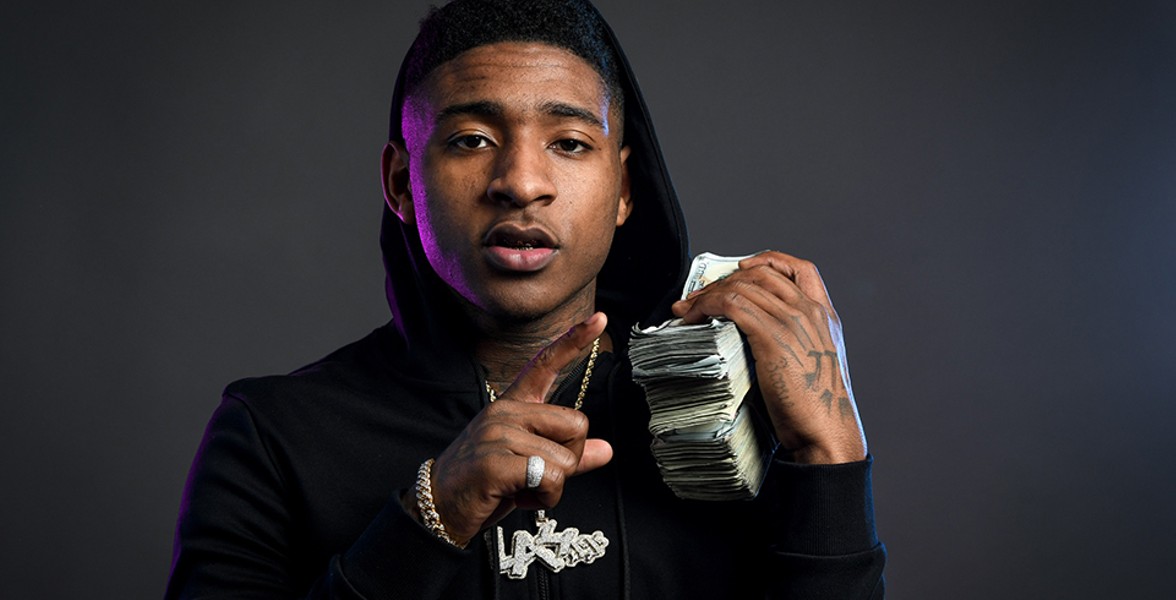 The prosecutor at the federal sentencing noted that Harris' glock actually belonged to his manager Cunningham — who was sitting just a few feet away in the downtown courtroom. The judge seemed to slag him as well. "If you sincerely want to be an entertainer," Autrey told Harris, "you need to do it without people who want to punk you, because they will suck you dry."

The city of St. Louis, however, feels differently about Harris' manager. "[T]he illustrious James (S.L.I.M.) Cunningham has worked tirelessly to promote HipHop and homegrown St. Louis music for well over a decade," reads a June 2016 resolution presented by Aldermanic President Lewis Reed. Projects including Cunningham's celebrity basketball tournaments, it continues, "have been focused on bringing jobs and economic vitality to the City of St. Louis."

"Slim" refers both to his frame and his hometown allegiance: "St. Louis Is Mine." He's one of the most successful hip-hop promoters in the country, having thrown shows featuring Lil Wayne, P. Diddy, Drake and many, many more.

After his parents split he lived in both the city and the county at times, spending summers with his dad, who lived near Harris' father on Enright Avenue. Cunningham attended (and was kicked out of) high schools all over the metro area, which helped him amass a wide rolodex. Mentored by older brothers who threw parties, he began putting on events of his own in earnest after a stint in Atlanta. This was the early '00s; Nelly was blowing up, and they hosted parties and played against each other in Cunningham's charity basketball tournament. "It was beautiful," says Cunningham. "I figured out my niche, and everybody else figured out their niche."

The pair fell out publicly in 2011, however, with Cunningham accusing the rapper of spending his "whole fortune" on drugs, steroids and gambling. Nelly denied the charges, referencing S.L.I.M. on Twitter as a "S_hady L_ame I_gnorant M_uthaf#cka."

Cunningham has worn many hats over the years. In the late '00s he co-owned a Midtown club called Karma and in 2011 released a rap album featuring Gucci Mane and 2 Chainz. He's thrown parties catering to women called "Slimulus" — where women receive money just for walking through the door — and celebrity affairs with basketball stars like Carmelo Anthony. In 2004, when Anthony was found with marijuana while boarding the Denver Nuggets' team plane, Cunningham took the rap, claiming the backpack harboring the weed was actually his. "Melo don't even smoke," Cunningham told Denver's Westword, in a piece that called him "either one hell of a friend or one hell of a promoter."

Cunningham's LooseCannon Entertainment still puts on big events, but Cunningham says he's bored with concerts these days — "I can do them in my sleep" — instead leveraging them to promote his hip-hop label, for which LA4SS is the main artist. This tactic was on display at Cunningham's recent Chaifetz Arena show, the fifth in a series called State of Emergency, which he began throwing as a way to bring attention to St. Louis' spiraling violence.

The show was March 14, just one month after Harris returned from prison. News of LA4SS' release spread quickly across social media. After all, when he went away he was the hottest rapper in the city; now, this "314 Day" concert would double as both homecoming and comeback attempt. It could put his career back on track, or demonstrate definitively that his fans had moved on. 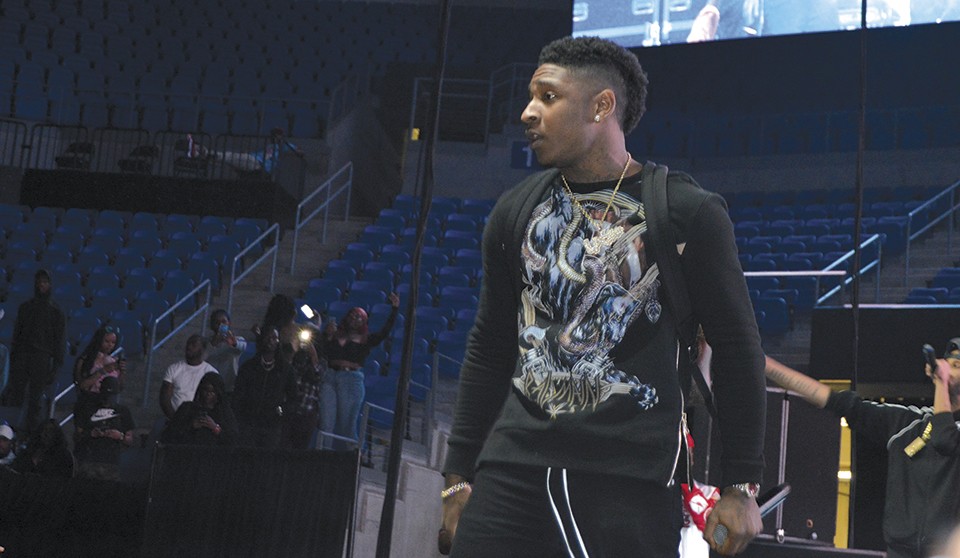 They're turnt tonight at Chaifetz Arena for State of Emergency 5, all 5,000 of them — not a packed house, but loud. Cunningham promises this will be the show's final iteration, and it's headlined by two of the South's biggest names, Migos and Lil Boosie.

Still, a massive portion of the crowd has arrived specifically for LA4SS, if the amount of festooned swag is any indication — from tees shouting out his slain brother to LA4SS headbands. Whole families are decked out, not to mention packs of high school girls, guys with their girlfriends, even moms and toddlers, who shake to (and from) earth-shaking gunshot sounds played by the warm-up DJ, which double as bassy percussion.

Around 10 p.m. Cunningham takes the stage, imploring attendees out of their seats and down into the lower tiers, where they crowd the aisles in anticipation. The fire marshal is not going to be happy.

And then, he's there on stage. Louis Vuitton backpack. Diamond necklace. Balmain long-sleeved black T-shirt with zippers on the sides.

The stadium roars. But they're not sure exactly what they're looking at. As he launches into his songs the video screen behind him shows old clips from before he went away, when he was still a teenager. There he is in Miami, a skinny kid with a chip on his shoulder; there he is mean-mugging before the Arch. The guy on stage now is stockier. His muscles are bigger, his youthful glow is gone.

"All my street niggas make some noise. Where my trap queens at?"

Pandemonium ensues as he plays his hits. Not radio or chart hits, of course, but St. Louis hits, songs shared on YouTube and spread across the city one phone at a time. Everyone here knows them.

I'm balling on you boys, I think I'm Jayson Tatum!

Rapping for about fifteen minutes, he's not the most seasoned performer; jail time will do that to you. Yet for a young man who has every reason to resent the world — for someone who makes his living unearthing the pain that most people like to keep buried — he's uncharacteristically elated by this moment. His rare smile delights. After everything he's been through, he's still standing.

A few days later, Cunningham notes that LA4SS has new music on the way: soon, a single called "Misbehavior" — an "apology to the city" for his crimes — and a mixtape or album this summer. They just flew out to LA to negotiate with labels. For now, they're leaning toward Atlantic Records.

"I was there through Chingy, Nelly, everybody," Cunningham says. "With Nelly, they didn't go crazy until after he got the deal. But there's never been an organic force like this in the history of St. Louis."

Cunningham gets paid to say things like this. Still, when it comes to LA4SS, it rings true.