The first thing you see in Damien Chazelle's La La Land (not counting the usual string of production company logos) is a nod to the past, a vintage mid-'50s title card that reads "In CinemaScope." Like Tarantino's use of retro '70s logos, it's a hint of what's to come, simultaneously identifying the wide-screen process in use (although one could quibble that the film was actually made with Panavision lenses) and creating a little distance by placing it in a nostalgic context. Grab your hats, folks, we're taking a leap back to the lost art of the Hollywood musical, back to the song-and-dance days before the pictures got small.

Yes, La La Land is a musical, a throwback to the spectaculars of 60 years ago in which romances rose up in song and whirling, floating cameras became a third dance partner. Shot in bright hues just on the safe side of gaudy, this is a love song to a purely imaginary Los Angeles and to a cinematic ideal patented by Donen and Minnelli and filtered through the art-house sensibility of Jacques Demy (a major influence here). Despite its minor contemporary touches, Chazelle's film is nostalgia squared, a longing for a fiction already re-imagined in films like The Young Girls of Rochefort.

It begins with a splash, a broad and flashy scene in which drivers in a freeway traffic jam leave their cars — who knew that the highway was filled with skateboarders and acrobats? — to sing a hymn to the California sun. Among the crowd are Mia (Emma Stone), a would-be actress studying for an audition, and Sebastian (Ryan Gosling), a struggling musician. Their paths will cross again, but not until the film establishes that Sebastian is a dedicated artist whose commitment to "true jazz" (his expression) means that he'd rather starve than compromise. Someone should have told him that going to LA for a jazz career is liking moving to Nashville to become a calypso singer.

And yes, Mia and Seb (if you insist) finally meet and fall in love, complete with singing and dancing — sometimes adequate, sometimes strained — but always extremely likable in the candy-colored world of La La Land. The film is so bright and flashy and self-assured that it's almost impossible to dislike, but there's an intrusive self-consciousness that works against it.

Chazelle is so eager to make sure the audience catches his film history credentials, for example, that when he nods to Rebel Without a Cause by staging a dance scene in the Griffith Observatory, he oversells it by first having Gosling and Stone attend a screening of Nicholas Ray's film. He loves the bold, brash tones of '50s musicals, but he also tries to keep a cool reserve. Although he steers clear of the hipster posturing that damaged his earlier foray into the genre, Guy and Madeline on a Park Bench, there's a contrived, calculating quality to this exercise in genre resurrection.

It would be foolish to point out that Gosling and Stone, who are actually quite appealing, are not the equals of Gene Kelly or Cyd Charisse. But certainly one of the great things about Hollywood musicals is the actors' sheer love of performance. Kelly and Astaire, Donald O'Connor and Debbie Reynolds seem to be bursting with energy; they can't wait to break into song or tap across a stage. Gosling and Stone are sheepish by comparison, and while their "I can't believe we're doing this" modesty is charming at first, it can't make up for plain old talent and enthusiasm.

The film stumbles most in its last 40 minutes or so. A subplot involving John Legend as a rival who hires Sebastian for an electronic jazz/funk band promises much more than it delivers. Hurdles in the romantic relationship seem purely arbitrary and throw the film so far off course that it takes a contrived fantasy sequence (a musical interlude that revises/reprises the entire plot and reminds me of the finale to The Muppet Movie) just to bring the film to a conclusion.

The bumpiness of the plot is not helped by the heavy-handed reminders that this isn't just a love story, it's about True Art, complete with lectures about "living your dream" and a lot of fretting about compromise (playing Christmas songs in a bar is selling out, but playing "Take on Me" in an '80s cover band evidently isn't). Mia and Sebastian, the film tells us again and again, are True Artists, but Chazelle seems to define "true" art as commercial success with carefully articulated compromise — box office appeal for her and running a ritzy nightclub for him. (Although to the best of my knowledge, neither Thelonious Monk nor Miles Davis ever ran a nightclub, with no apparent detriment to their talents.)

Chazelle is not the first to try to reclaim the Hollywood musical. He's following the path of other post-Golden Age musicals such as New York, New York, At Long Last Love, One From the Heart, Pennies From Heaven and Absolute Beginners, all notorious failures, nearly all of them more ambitious and better films than La La Land. But those films wanted to take what was bright and magical about musicals and bring it into a harsher, less naive world. Chazelle just wants to polish off the genre and treat it like a novelty. It's a lovely, well-made but essentially empty film. It's a good movie in many ways, but not nearly as good as its makers seem to think it is. 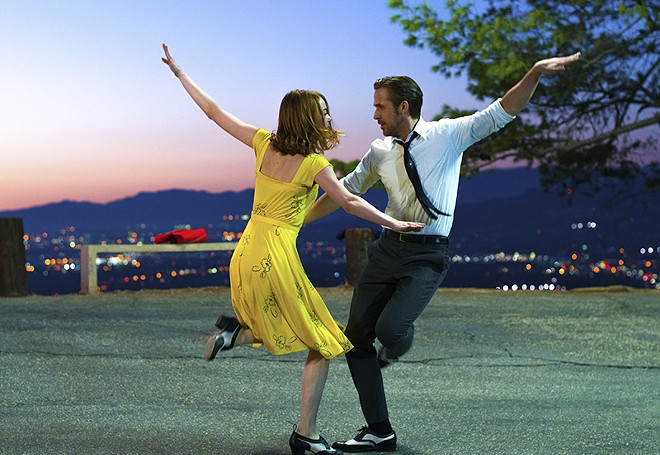