Knockout BBQ Distinguishes Itself in a City Where Great Barbecue Abounds

If you casually stroll down South Grand and catch the aroma of smoke wafting from the back of Rooster, you might think a new barbecue restaurant has opened up nearby. In some ways, that's true. Last October, restaurateurs Dave and Kara Bailey converted the back part of their beloved brunch spot into a barbecue joint, complete with a bold red, orange and yellow sign, a menu of smokehouse staples and a line of sauces that represents a wide swath of barbecue styles.

Lest you think the Baileys have suddenly jumped on the barbecue bandwagon, however, you'd be mistaken. Though Knockout BBQ has only been around for four months, the pair have been working on their barbecue craft for much longer than that — eight years if you count the smoked burger and pulled pork they served when Bailey's Range opened in 2011. Though not a smokehouse, Range offered Dave his first real opportunity to play around with barbecue, one of the many restaurant concepts the prolific restaurateur has had in his mind for as long as he can remember.

However, the Baileys' barbecue work began in earnest about five years ago when they opened Rooster on South Grand. With its large footprint, the space became not just a restaurant, but the commissary for their other restaurants (Range, Small Batch, Pop, Bridge Tap House & Wine Bar) and catering company. As part of the buildout, they installed a smoker and went all-in on barbecue, developing rubs, perfecting cooking times and concocting sauces and sides that they offered as an option for their catering and events business.

The 'cue was a hit, and it confirmed for them their long-held desire to do a full-on barbecue restaurant. They had a venue in mind — the old National Cash Register Company Sales and Repair Building, a historic property on Olive Street — but the buildout would take some time to complete. In the meantime, the Baileys wanted to offer their barbecue to the public right away and felt that the underutilized space inside the South Grand Rooster would be the perfect place to do that. 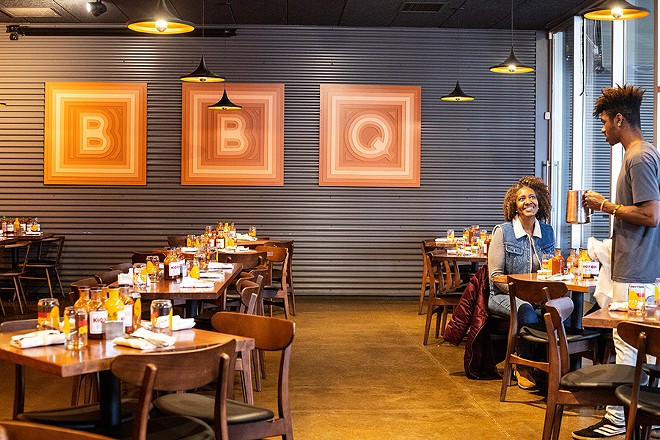 The Baileys did not fundamentally alter the Rooster building, but instead converted the back part of the restaurant and enclosed patio into a distinct space. Knockout BBQ has its own identity in the form of bold red, orange and yellow branding, warm orange paint and a three-part mural that says "BBQ" hung on a dark gray metal wall. Simple but sleek wooden tables provide seating inside the restaurant; on the patio, wooden picnic tables give off a rustic barbecue joint feel.

Knockout may not yet be located in the National Cash Register, or NCR building (a location will open there in the future), but it takes a good deal of inspiration from the historic property. The dining room is decorated with old black-and-white photographs of local businesses, each one featuring an NCR cash register. Even more referential is the name itself. "Knockout" is a nod to the shady business practices of the former head of the NCR, who used hired guns called his "Knockout Squad" or "Knockout Department" to intimidate his competitors. 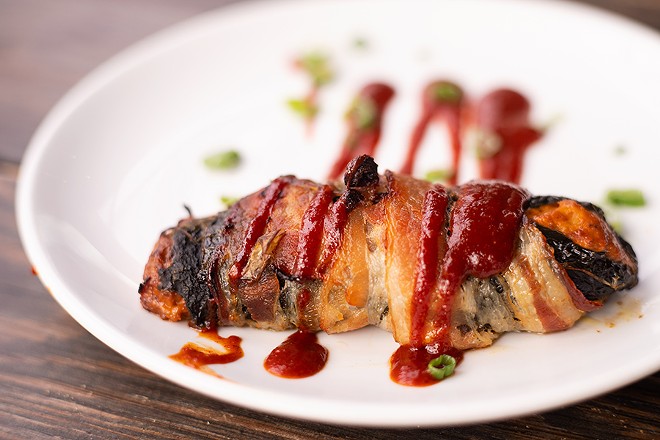 The Baileys needn't rely on such tactics to ensure Knockout BBQ's success — the food does that for them. Drawing inspiration from multiple barbecue styles, the restaurant seems to be less married to producing the quintessential form of a particular genre and instead is having fun playing around with flavors. You see this in the Texas Twinkie, a playful appetizer consisting of a poblano pepper stuffed with brisket-laden cream cheese and wrapped in bacon. Though it sounds like a gratuitous mess, the dish is actually a well-executed balance of salt, fat, smoke and spice that sets the tone for what is at times a whimsical exploration of barbecue.

The breading on the fried green tomatoes was thicker than what I'm used to — the cornmeal-based black-peppery coating is as crunchy as what you get on chicken fried steak. It did not overtake the tart tomatoes, however, and instead offered intense crunch and seasoning. The bacon-ranch dipping sauce that accompanied the dish did not taste like either, but I'm not complaining. The sauce is like a rich, garlicky aïoli that was so flavorful, I found myself dunking scraps of breading into it when I ran out of tomatoes.

That delectable breading foreshadowed Knockout BBQ's outrageously wonderful cornbread. Served in a small, square cast-iron skillet, the fluffy cornbread is studded with green chiles, baked and then drizzled with honey butter so that the sweetness mitigates the peppers' heat. It's fiery, but the nutty bread and rich butter sauce are so comforting, you don't mind the sting.

Smoked whole wings have a black-pepper and thyme-forward rub that clings to their sticky skin. Underneath this thin layer, the juicy meat is so tender it slides right off the bone. You don't feel it on the first few bites, but there is a cumulative spiciness from the rub that sneaks up on you, a back-of-the throat heat that is tempered with a side of zesty Alabama white dipping sauce.

The smoke on the wings — Missouri hickory — is there, but it's just a whisper. In fact, all of Knockout BBQ's meats lean to this subtle smoke style. Like the wings, the chicken is a standout, rubbed with sage, thyme and pepper that infuses the meat with intense, savory flavor. That it's smoked so that the meat is impossibly juicy and pulled to order, however, are the keys to its success. The pulled pork is just as succulent. Here, the seasoning is much subtler, allowing for the meat's flavor to shine through. I appreciated how rustically the pork was pulled apart; the plump, fat-laden pieces of meat were the size of rib bones.

Knockout BBQ's fatty brisket (is there another kind?) is fall-apart tender like Texas-style brisket, but it deviates from the form in that it does not have the characteristic intense, black-peppery bark around the exterior. Purists may miss that, but this die-hard Texas brisket fan appreciated the different approach that allows for simple, beefy enjoyment.

As much as I enjoyed the brisket, my favorite dish at Knockout is its burnt ends. Here, a thick, black-peppery rub completely encrusts the hunks of fatty beef. The meat is lightly tossed in a slightly sweet sauce that mingles with the rendered fat, forming a spicy glaze that turns these beautiful nuggets into mildly spicy meat candy. They are intensely decadent but so wonderful you can't help but devour an entire order.

Ribs are offered in two styles. There's a classic smoked style that has the right amount of chew and pull to them, the meat rubbed with a warm spice blend that enhances, but does not cover, their sweet pork flavor. If these are meant to be subtle, the smoked and fried Trashed Ribs are meant to hammer you with more heat and a touch of sweetness. Both are worthy offerings, but Knockout BBQ's best pork dish is its pork steak, a thick slab of meat slathered with a sneakily hot glaze. The spice isn't overly powerful, but there is enough of it to cut through the fatty pork, balancing out the dish. 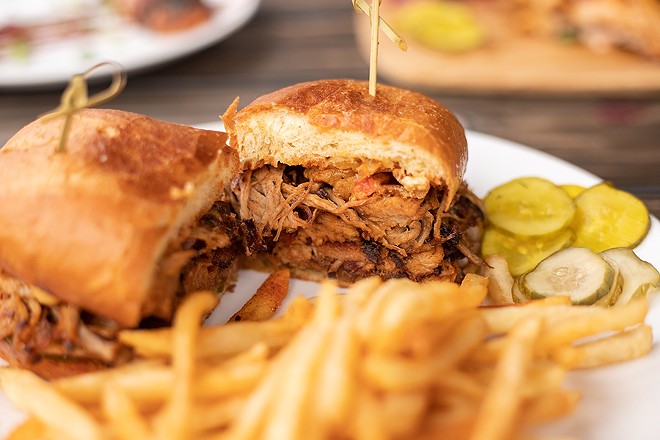 Of Knockout BBQ's sandwiches, the Cuban stands out with its smoky ham and pulled pork, pressed together onto crusty Cuban-style bread with tangy Swiss cheese, pickles and beer mustard that brighten the meat's flavors. The Red Bird features the restaurants wonderful pulled chicken, here presented as a loaded grilled cheese with fontina, cheddar, tomatoes and sweet pickles on Texas toast. It's a flavorful sandwich, but without adding sauce, it's a bit dry.

Instead of offering a simple smashed burger, Knockout BBQ's version features two smashed patties on a butter-griddled hoagie roll, topped with a rustic tomato and lettuce slaw that evokes a gyro garnish. Rich pub cheese is drizzled over the patties, soaking into every nook and cranny. It mingles with the zesty Knockout Sauce to form a decadent, gooey glaze. 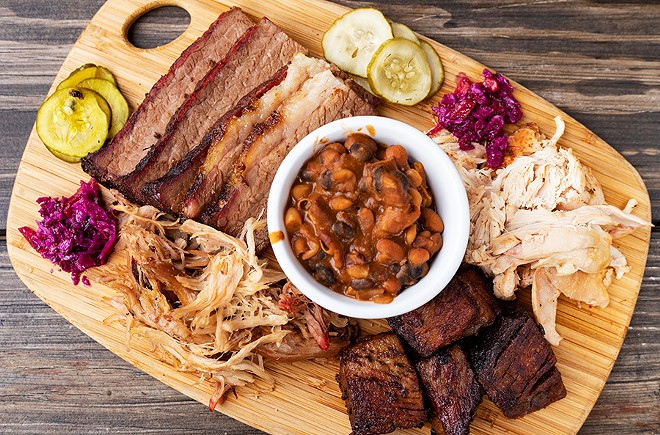 Sides are expected, but for the most part done well, including tangy pit beans, rustic-chopped slaw and skin-on, smashed potatoes smothered in peppery chicken gravy. Collards lean to the sweet but are balanced with large pieces of savory smoked pork — my favorite side dish by far.

There were a few missteps along the way. On both visits, Knockout's smoked turkey was extraordinarily dry; even a generous smother of sauce did not help matters. I also found the smoked fried chicken to be overwhelmed by an overly-seasoned and thick batter. The accompanying Alabama white sauce mitigated the heavy seasoning, but the herb-forward coating was still overpowering. Mac 'n' cheese, however, could have benefited from some extra zest. The velvety texture was spot-on, and I appreciated the contrast provided by the bread crumb topping, but the cheese sauce itself was bland. 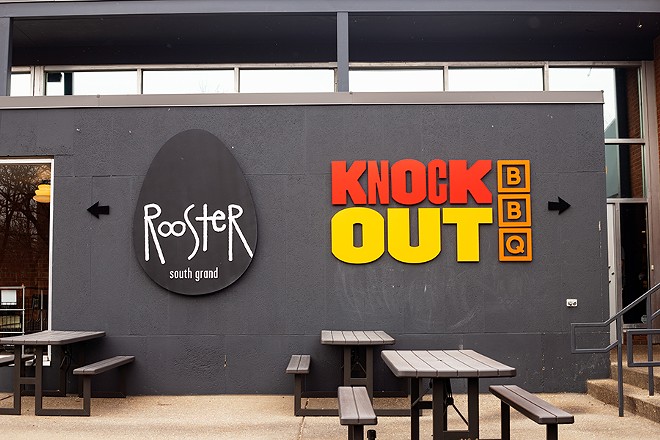 Once the KO Cobbler hits the table, all memories of anything less than perfect quickly fade away as the scent of dark fruits and lemon-scented biscuits envelope you. Served in a small cast-iron skillet, the crumbly crust is like a toasty lemon blanket atop tart blackberries and blueberries. The best part are the outer edges, which are like little crusts of berry-kissed shortbread. It's pure, sweet comfort.

That cobbler evokes honest, easy joy much like Knockout BBQ itself. By taking a tack that's less about rigid, genre-defining 'cue in favor of a playful approach that celebrates the beauty of barbecue in general, the Baileys have distinguished themselves in a city where great barbecue options abound — no Knockout Squads required.