Kirkwood Deli Just Might Be Serving One of St. Louis’ Best Gyros

Kirkwood Deli & Grocery looks like any other suburban corner market — the sort of place you go to pick up a six-pack of Corona, a lotto ticket or a pack of Band-Aids when you're desperate but too lazy to run to the supermarket. In fact, it looks so basic from the outside, you tend to drive by without even noticing the place; you certainly don't give a second glance to the handwritten sandwich board erected in its parking lot, certain that it advertises nothing more than the week's special on Coors Banquet.

However, if you happen to pause at the four-way stop at Essex and Geyer a little longer than normal and look more closely, you'll see that the sandwich board makes a bold statement that has nothing to do with beer prices. "Best Gyro in Town," it reads, leaving you to rub your eyes, look again and then wonder what in the hell a quickie mart could possibly bring to Greek cuisine. 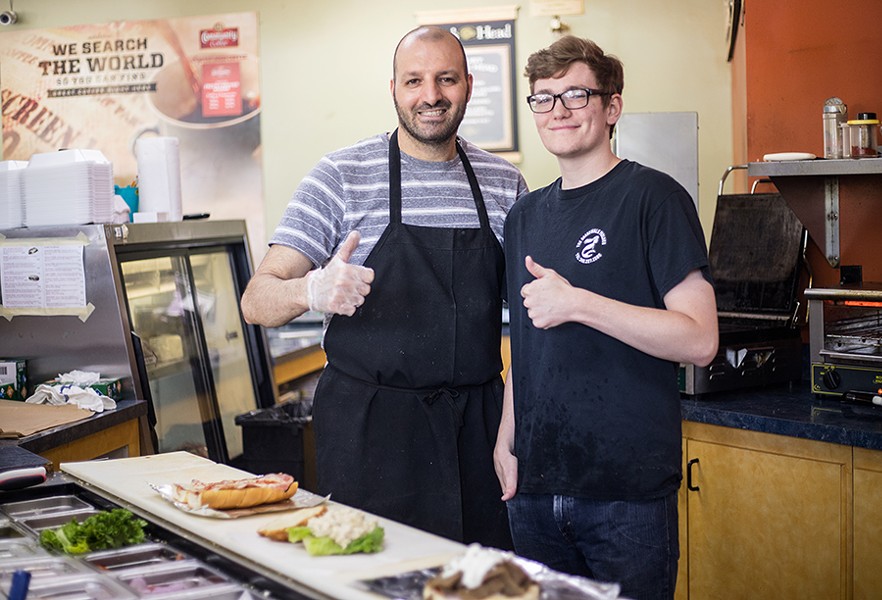 Mike Bahour, the owner of Kirkwood Deli, is used to getting skeptical looks when new customers decide to venture in and check out the place. He's gotten them ever since he took over the 35-year-old market roughly two-and-a-half years ago. He's also grown accustomed to what happens after those customers take their first bite of the massive, tzatziki-covered wrap: a look of shock that turns quickly into utter bliss.

Though Bahour has only owned Kirkwood Deli & Grocery for a few years, he is no stranger to the mini-market food business. For two decades, he has owned similar bodega/food counter concepts, serving everything from sandwiches to fried chicken. However, this particular venture inspired him to go bigger than he had in the past. As soon as he took over, he got to work expanding the market's existing sandwich counter into a full-fledged deli. 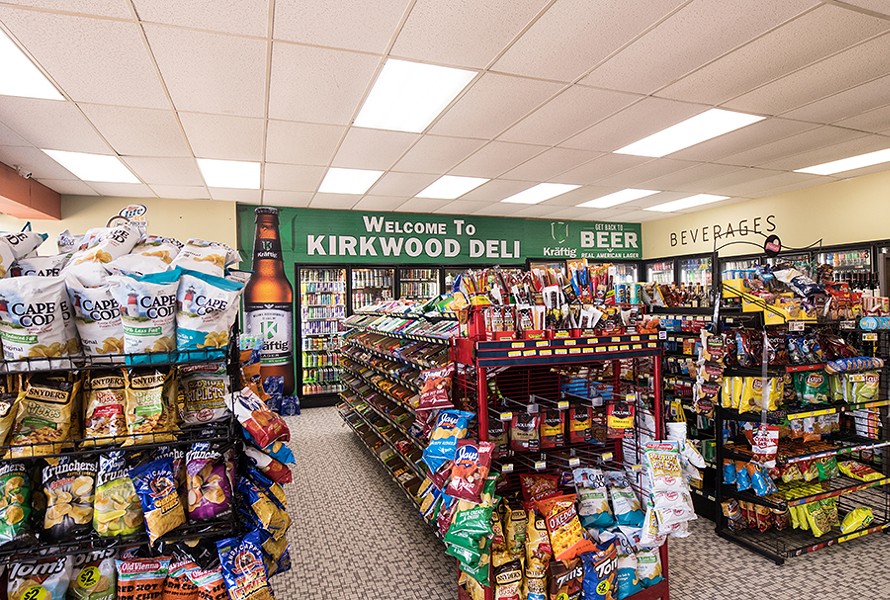 It's a striking setup. When you walk through the front doors of what was once an old Magic Market, the first impression is just how large and open it is. Like most corner markets, the walls are lined in beer and soft drink coolers, leaving space in the middle of the room for shelves filled with staple groceries and sundries. And if you hit these aisles before checking out the deli counter, you'll see your first clue that this is no ordinary corner store. Two aisles contain a wine selection at least as good as what you'd find at your average small grocery store; that a mini-mart divides its wine aisle by region is telling.

Just as impressive as the wine selection is the sandwich counter setup. That's not necessarily in terms of size, but in what the small staff of cooks (typically two) is able to accomplish with such humble accommodations. With little more than the sort of electric griddle you use in a home kitchen and a toaster oven, Kirkwood Deli serves not only gyros, but a comprehensive sandwich selection, using all Boar's Head meats.

That includes such offerings as the "Southern Comfort," a hot melt of garlicky fried bologna, bacon and gooey Provel. It's a rich, decadent pile of meat and cheese, but pungent yellow mustard cuts through the fattiness, giving it a piquant punch to balance out the other components.

The "Smoke Stack" takes all the components of a classic club — ham, turkey and bacon — but has an added depth because the meats and accompanying gouda cheese are smoked. Piled high and finished with lettuce, tomato and a generous smear of mayonnaise, this flawlessly executed offering is magical.

So is the "Sink," another no-brainer combination of roast beef, ham, turkey and Provel. Here, however, Bahour adds salami, which gives the sandwich garlic and fat. He also tops it with banana peppers, which infuse every bite with mouth-puckering spice. The "Hot Italian" is a similar offering, but the addition of pepperoni and hot peppers makes it decidedly more fiery.

Kirkwood Deli serves adequate cheesesteaks, filled with shaved roast beef and molten Provel that is a good as a substitute as any for a classic Philly's Cheez-Whiz. My only quibble is that, at least during lunchtime, these sandwiches are prepared in advance and served out of a warming case; this takes away the greasy goo factor of a hot-off-the-presses cheesesteak. I understand you can only do so much with limited cooking equipment, but it makes a big difference.

The deli does manage, however, to execute an outstanding Reuben to order. Stacked high enough for heft without being obnoxiously overstuffed, the corned beef is shaved thin, covered with melted Swiss, sauerkraut and thousand island dressing and sandwiched between two slices of buttery griddled marble rye bread that soaks in every last condiment and drop of fat from the meat. This is not a great Reuben for a mini-mart; it's a great Reuben, period.

If the Reuben is Kirkwood Deli's nod to New York, its "Pioneer" is all St. Louis. The ham and cheese melt is a riff on the Gerber, which is arguably our city's best contribution to the culinary world. Here, crusty French bread is soaked in garlic butter, covered in Provel that is melted until it forms golden-hued bubbles and then piled with ham that's shaved so thin, it's reminiscent of prosciutto. A dash of paprika gilds this mouthwatering lily, which gushes with garlic butter in every bite.

The "Pioneer" would be Kirkwood Deli's best offering were it not for what draws you into the spot in the first place: the gyro. You don't even need to take a bite to realize it's good; when Bahour hands you the foil-wrapped sandwich, its heaviness is shocking. As you peel back the silver wrapping, its heft reveals itself in the form of a lightly toasted pita stuffed with what looks like at least two sandwiches' worth of filling. But it's not just the size that matters. The meat, a combination of lamb and beef, is tender, well-seasoned and juicy; Bahour slices it thicker than most, which only adds to the sandwich's overall beauty. Tomato, onion and tzatziki finish the offering. Rustic in texture, almost like a chunky cucumber garlic dip, the rich, housemade tzatziki brings everything together with a creamy zest.

Bahour is immensely proud of this gyro — and he should be. If it's not the best gyro in town, it's certainly one of them, a distinction that's even more impressive considering how unexpected it is. Were you to get this at a Greek restaurant, you'd say "wow." That it's coming from a quickie mart knocks your socks off. 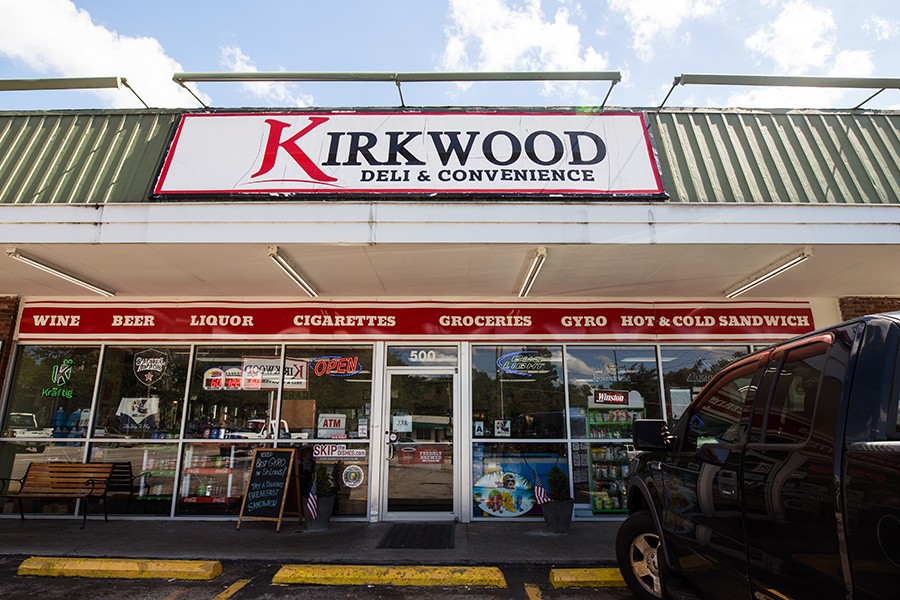 And Bahour is rightfully proud of much more than the gyro. What he's been able to accomplish at Kirkwood Deli is nothing short of impressive, and the speed and friendliness of his small staff only adds to the charm. Next time he's writing up that sandwich board sign, he might go with an even bolder statement. His fans, at least, wouldn't object to "Best Deli in Town."