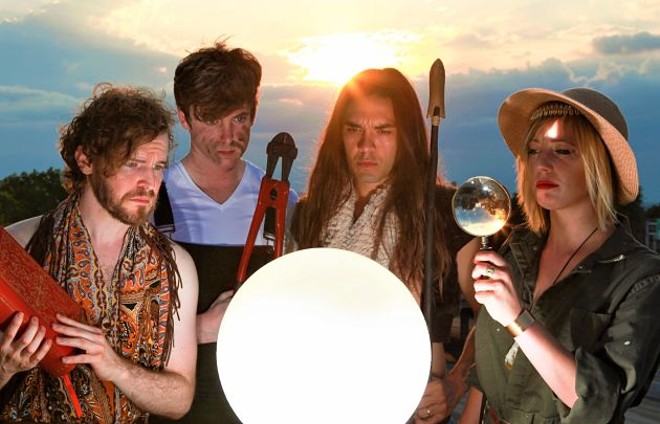 When he's not working his day job in communications for a local brewery, and when he's not leading the spry and artful indie pop band Kid Scientist, Joe Taylor can be found somewhere beneath the proscenium arch. He spends his evenings as the composer and music director for Equally Represented Arts (ERA), an experimental theatre group with a knack for taking post-modern approaches to some of the Western canon's most well-worn stories: The troupe has taken on the tragedies of Oedipus, Macbeth, and Romeo and Juliet.

And thanks to a quirk of the calendar or a streak of masochism, Taylor has chosen to release Kid Scientist's long-awaited, long-delayed new EP on the heels of ERA's just-launched production of Snow White. On top of that, the band's release show is no mere concert: Taylor has leaned on his friends in the theatre community to construct a two-night immersive show at Off Broadway to coincide with the release of the six-song Report from the Future.

Taylor says he was a relative newbie to the theater world before linking up with ERA, but Kid Scientist has long had a flair for the dramatic and performative. Taylor sings softly and sweetly in a high register, but his precise enunciation and piano-driven compositions suggest a touch of Rufus Wainwright-style cabaret. His bandmates — Audrey Morris, Dave Moore, Kevin Neumann and David Newmann — help round out the sound with orchestral flexibility on songs that run from bubble-gum to genteel country to synth pop.

"The album itself is kind of collage-like," Taylor explains. "I don't know if I'd call it a concept album; each song is pretty different in style, but I tried to make them all exist in a common universe. It's up to the listener or the audience to fill out a lot of things on their own."

You would be forgiven for looking for a narrative thread across Report, given the EP's name and scope of its near-title track, "A Report from the Future Regarding Prisoner #1074AD." But from the song's Asimov-like name comes a piano-driven bit of tango that gradually goes interstellar with synth arpeggios and bit-crushed drums — some sci-fi elements, but not enough to overwhelm. Elsewhere on the EP, Kid Scientist leans on some excellent musicians from around town to give color to these songs — Dave Anderson turns "The Graduation of Autumn" into a lovely country ballad with his pedal steel, and Devon Cahill and Taylor share a duet on the album-closing "Diary of an Archeologist."

Still, Taylor rejects a strict narrative for these songs, noting that most of them were written years ago and collated together to fill a six-year gap between Kid Scientist releases. "They're kind of sweet and kind of salty, and there's this sine-wave like thing that runs across the album," Taylor says of these songs. "It's sort of an experience that you've taken on when you listen to it front to back. There is not an overarching narrative per se; it's more the experiential factor."

That experience gets blown into three-dimensional proportions with this weekend's release show, which hopes to upend the quotidian nature of concert-going. Taylor is mum on some details but wants showgoers to be ready for a full-sensory experience.

"I want to have this core concert experience where if you were just coming to see us as a band, you would be totally fulfilled," he says. "If you are just coming to the show as a concert, you would be satisfied. But I also wanted to provide an experience for the theatre crowd, something that they would connect with." Taylor uses some video game lingo in describing his vision, telling of "side-quests" that will help populate what he calls "an immersive concept concert" that allows patrons to explore the entirety of Off Broadway's space — its balcony, backstage and green room spaces, not just its dance floor.

Taylor's involvement in a local theatre troupe has helped him realize this vision — he notes that a coterie of dancers, designers and set-builders have helped with the project. But it was a less theatrical but no less memorable performance this summer that fueled him as well: Matt Basler's meme-come-to-life "Smooth" marathon, where Basler and his ad hoc band played the Santana/Rob Thomas hit over a dozen times in a test of endurance and good taste.

"When I first saw that I was so happy and furious at the same time that I didn't come up with that," says Taylor. "I loved it. Apparently lots of people did; I think he really tapped into something with that. I think people are interested in shows that can offer something different from the typical concert-going experience."

With the immersive release of Report from the Future, Taylor, his bandmates and their dramatic cohort hope to tap into that sense of full-sensory immersion. It helps that, at their core, these songs can stand on their own.

"Anything I create is made to transport people," Taylor says. "I want people to have this impression that they are entering into a different world."