For Pizza and Insults, Kevin's Place Has Cherokee Street Covered 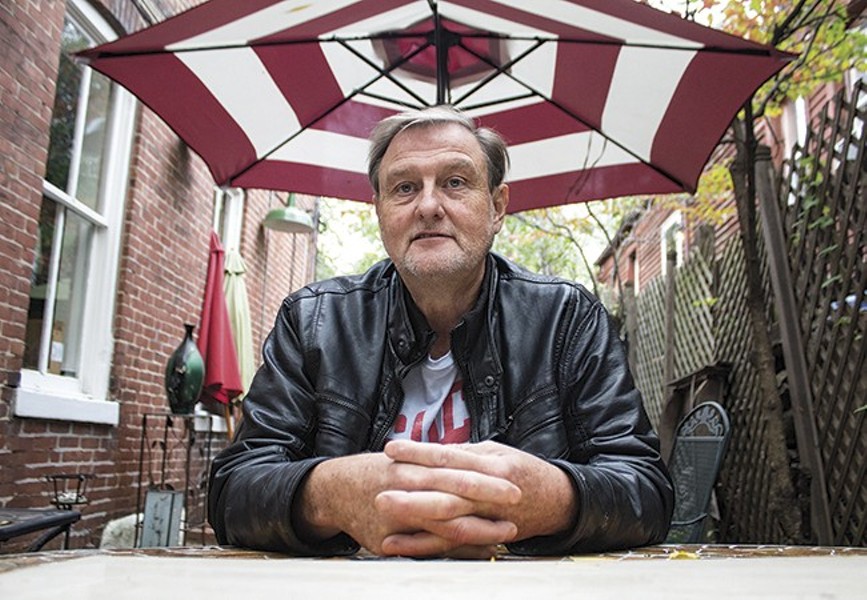 When Kevin McGinn insults customers, it's primarily through the phone. They call Kevin's Place, his pizzeria on Cherokee Street's Antique Row, and he greets them with a blast of anxiety: "Hellothisiskevinspeaking." McGinn himself always answers. After all, he's the sole employee: the order-taker, cook and the driver.

(Yes, that means he sometimes hustles out on deliveries while pizzas are baking; yes, while his front door is propped open; yes, while guests are dining in and unsure of his whereabouts. He just leaves. Then he comes back.)

Although McGinn is calm and witty during most transactions, he expects customers to be ready with their exact order during a rush. If they dither on the phone, he may grow impatient, curse, and hang up. Below is a sampling of things he has uttered at such moments, according to various customers and McGinn's own memory:

"If you say 'um' one more time, my head is going to explode."

"Dumb bitch, go back to school and get an education."

"My customers are geniuses."

One disgruntled reviewer complained on Zomato, an online restaurant-review site, that McGinn lost his temper and labeled all city residents "tattooed drug addicts." (The restaurateur denies this, insisting his actual words were "tattooed dog-loving freaks.")

It is a miracle of American commerce that Kevin's Place is still open — and in fact, just celebrated its tenth anniversary last month. For one thing, fewer than half of all restaurants make it that far, a 2014 study suggested. For another thing, the radical honesty of Kevin McGinn defies every norm of customer service. Yet somehow, it's working.

McGinn, 60, is by no means the first restaurant owner to vent frustration at customers. Recall Ali Yeganeh, the authoritarian soup vendor in Manhattan who inspired "the Soup Nazi" character on Seinfeld. Consider, too, the national restaurant chain Dick's Last Resort, which boasts of its "outrageous, surly" servers. Here in the Midwest, Chicago is home to both Ed Debevic's, an old-school diner offering a "side order of sass," and the Wieners Circle, a hot dog stand where the staff berates the late-night crowd.

Yet in most of these cases, the whole thing is schtick and spectacle. It's a gleeful trampling over the maxim that The Customer Is Always Right. And everybody's in on the joke.

Not so at Kevin's Place. If McGinn sounds hot-tempered, that's because he is. He doesn't filter his feelings. He knows that it costs him some revenue, and occasionally he apologizes. But he's always himself.

"All I'm doing is saying the things you'd like to say but aren't allowed to," he explains. "My customers either love me or hate me, and I don't care which it is. I do the best I can."

His rawness sets him apart from the artists and creatives who dwell on Cherokee Street. Practically everyone in the neighborhood would qualify as eccentric by the standards of mainstream culture. The younger crowd tends to be self-consciously so; they value expression, originality and weirdness. McGinn isn't aiming for weird. That's just a label he earned accidentally by delivering pizzas on a giant tricycle, talking to his adopted cat and hanging out shirtless in a dining room that's adorned with multiple portraits of Marilyn Monroe.

Nearby merchant Cherri Elder, co-owner of Elder's Antiques, suggests that his quirks don't even matter.

"It's Cuckooville down here, honey," she says, "and he's the full cuckoo package. It's never a normal experience. Good pizza, though."

And that's objectively, scientifically true: His pizza is a treasure. It's done St. Louis-style: thin crust, tangy provel mix, baked in a brick oven, then sliced square-wise. Its fragrance fills the entire block. He takes pride in it. But to get a taste, you need to be prepared for all kinds of emotional weather.

"He's temperamental, like a cat with rabies, but lovable," says Jennifer Smith, a candlemaker who sells her wares across the street at the Heirloom Room. While McGinn does get embroiled in shouting matches with neighbors, she says, he can also be quite charming. She recalls his demeanor during the solar eclipse last August when many Antique Row merchants spilled onto the street to peer up at the sky.

"He was like a different person that day," recalls Smith. "He was joking, he was smiling. He was wearing shoes."

These days, McGinn has his sights set on a whole new neighborhood: He has rented a commercial space in Northampton, adjacent to a building where he lived briefly as a kid. His plan is to open a second Kevin's Place there. But he's reluctant to hire another employee, so he vows to work 90 hours a week and run both restaurants himself.

Can he pull it off? Various friends, neighbors and customers believe he can.

As one Yelp reviewer wrote: "Kevin is like Superman, if Superman was kind of awkward and drove a Corolla." 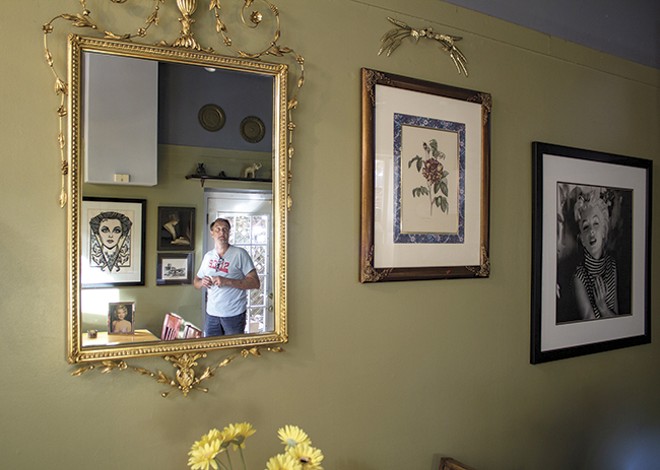 Over the summer, McGinn appeared in a major motion picture that played in cinemas across the country.

His cameo comes exactly an hour into Kidnap, starring Halle Berry. Berry's character has a young son who gets abducted into a car by a shady couple. The couple speeds away, but Berry the mother-heroine chases them, all the way out to their remote home. Berry creeps into the house and glances at some framed photographs atop the mantel. McGinn is in one of those photos.

How? The actress who played the shady female kidnapper is Chris McGinn, Kevin's sister. The production staff asked the St. Louis-born thespian to bring in her old family pictures to use for that scene, so she dug up a shot from years ago of her and her brother.

(When Kevin found out, he pleaded to be introduced to Berry; Chris laughed and said, "Sure." The meeting is still pending.)

Chris remembers all the injuries her brother suffered while they were growing up in St. Mary Magdalen parish in south city: That time he broke his shoulder playing hockey. The time his buddy stabbed him in the neck with a knife (which may not have been an accident). Or the time the siblings got into a skirmish and Chris poked him in the eye with a pencil. (Its graphite tip is still lodged in his eyelid, and still visible, to this day.)

Most vividly, though, she recalls his entrepreneurial fire: By age nine, he was hawking copies of the St. Louis Post-Dispatch on South Kingshighway at Chippewa. A few years later and two and a half miles north, he got a job at Pagliacci's pizzeria by lying about his age. (When they discovered he was twelve, not fourteen, they fired him.)

He later found work at Rugerri's on the Hill, where the legendary Stan Kann was still playing the organ, and then at Steak 'n' Shake. Once he earned his driver's license, he delivered for Imo's. He was so focused on his cash income, he would even wash and iron the bills.

In 1979, when Kevin McGinn was 22, he and a friend launched their first brick-and-mortar venture, Bugsy's Pizza, at 2810 Chippewa. They did well enough to add a second location, but the partners had a falling out and split up the business. McGinn renamed his wing of it Circus Pizza, which grew to four locations.

But he swore he'd be out of the pizza racket by his 30th birthday, and made good on that promise: In 1987, he sold Circus Pizza and became a cab driver. (McGinn credits his stint as a cabbie with enough knowledge of city streets to obviate any need for a map or GPS while on deliveries.) He started buying cars and leasing them out to other cab drivers. Then he moved full time into car rental.

But his destiny smelled like pizza. One summer Sunday in 2007, he ate brunch at the Mud House cafe on Antique Row, the eastern half of Cherokee Street. He was scheduled to start a new job the next day as a sales rep for a construction firm.

After brunch, he strolled west up the block and noticed an empty storefront. A century before it had been a cigar shop. He wondered if he could rent the space for cheap. While standing there, he called the owner to inquire and learned the rent was even lower than expected. He reserved the space, without even stepping inside, and opened Kevin's Place in October 2007.

"My friends said, 'You're doing a really good job avoiding getting a real job,'" he recalls.

McGinn threw himself back into the pizza world. A lifelong bachelor, he says, "I don't have kids; my business is my kids." He furnished the dining room with various wood pieces from Antique Row. He also hung up pictures of Marilyn Monroe, who reminded him of a sweetheart he had while at Bugsy's in his early twenties.

"I thought it'd be a good karma thing," he says. "And Marilyn's not so bad-looking."

Online reviews soon trickled in. Customers raved about his pizza, which explains in large part why he's still in business: He's good at it.

McGinn mixes his own sauce and tops his pies with your choice of either mozzarella or a blend of provel and five other cheeses that he grinds himself. (He declines to divulge his trade secrets by getting more specific.) He bakes everything in his brick oven by feel; he refuses to set timers. Then he cuts the pizzas in squares, as all self-respecting St. Louisans do.

Of course, he wasn't pleasing everyone at first.

"If you like provel, check it out," wrote one customer on Zomato in May 2009. "Otherwise, I would go somewhere else. Plus, it didn't help my confidence in the place when I walked in on a Friday night and found the owner/cook laying down on a couch watching TV."