When Katie Lee-Collier opened Katie's Pizza with her father back in 2008, she was a true novice. It took her seven tries to get the first order for a Margherita pie good enough to serve to a customer. She didn't even know how to fold a pizza box. In fact, she didn't know much of anything about running a restaurant, she admits, outside of her passion for cooking and an unyielding commitment to putting out good food.

If you ask Lee-Collier, she didn't feel much more prepared when she and her husband, Ted Collier, opened the first Katie's Pizza & Pasta Osteria four years ago in Rock Hill. At the time, she and Collier were both climbing out of low points in their lives: She had just gotten sober and had been living in a halfway house when she pitched him her idea for the restaurant; he had lost everything in the real estate market and was looking for a fresh start. The day she opened the doors, Lee-Collier honestly wondered whether or not they would be able to pay back the investors.

These days, with the Rock Hill restaurant a big success, a meal delivery company launched and a second location of Katie's now open in Town & Country, it's hard to imagine such growing pains characterizing Lee-Collier's ascent to St. Louis restaurant royalty. Her beginnings, however, tell a different story, one of a kid who struggled with school, ultimately dropping out at the age of fourteen, and got into the industry because she didn't know what else to do. 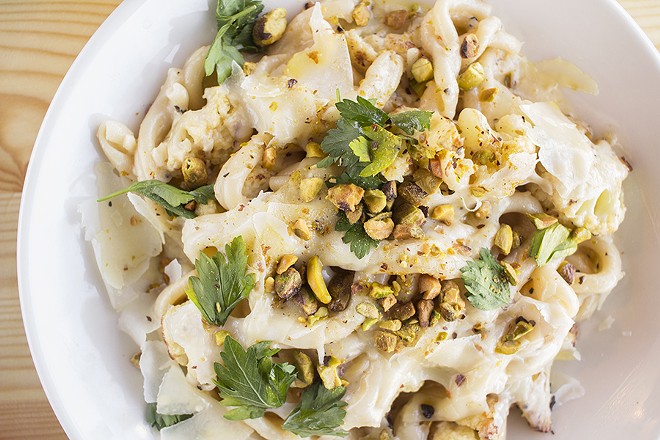 Describing herself as so shy that she was nearly mute, she says her mom suggested restaurant work as a way to break out of her shell. She got a job at her aunt Zoe Robinson's restaurant, Café Zoe. At first, she was too scared to pour water for tables, but her confidence gradually increased and she fell in love with the business. For the first time in her life, she says, she'd found a way to connect with people.

If her experience at Café Zoe, and another early gig at Crazy Bowls & Wraps, gave her words, the time she spent in Italy gave Lee-Collier her voice. After her initial forays into the restaurant business, Lee-Collier found herself in Florence where her mom was running a study-abroad program. Seeing how food permeated every aspect of community and culture, Lee-Collier immersed herself in the culinary world, teaching herself how to cook by studying with the locals in their home kitchens, going to the market and trying to recreate what she'd learned.

When she returned to the U.S., Lee-Collier knew she wanted to open a restaurant but quickly realized she did not have the resources to do it on her own. After persuading her father to go into business with her, the pair opened the original Katie's Pizza on Clayton Road and ran it together for roughly five years before she and her husband struck out on their own in Rock Hill.

My review of the Rock Hill location, shortly after it opened, was tepid, informed by what I saw as a failure to execute on a concept that had enormous potential. In the years that followed, I'd heard chatter that things had gotten better — much better, in fact — and that Lee-Collier and Collier were now responsible for running one of the city's most charming and satisfying restaurants.

I don't typically re-review restaurants, but the new Town & Country location, which opened this past August in a former Einstein's Bagels near the intersection of Clayton and Woods Mill, offered an opportunity for a second look at Katie's Pizza & Pasta Osteria. What I found was not only a much better restaurant than the one I'd checked out almost four years ago in Rock Hill, but a restaurant that is easily in the conversation for one of the best spots for Italian food in the city.

Aesthetically, the new osteria carries on the Rock Hill location's tradition of turning a basic strip-mall space into a bastion of stylish comfort. Here, the room is painted white and accented with blonde wood. Mismatched tables and chairs and a see-through partition of succulents create a warm feel, while abstract paintings by Collier (he is also an artist) give the space a modern vibe. The room's most prominent feature is its brass and mirrored bar, lit by large, round, vintage white bulbs. The light dances off these surfaces, making the entire room seem as if it is twinkling.

Like those good looks, the concept for Katie's Pizza and Pasta Osteria has not changed since my 2014 visit. What has changed, however, is how much the Colliers have stepped up their game, serving thoughtful, approachable food with near-flawless execution. An appetizer of mussels, steeped in a 'nduja-infused broth, tastes as if the classic Belgian preparation took a Sicilian holiday. The kitchen is restrained in its use of the fiery sausage; it's evident, but does not overpower the broth's tomato and white wine flavor.

"Katie's Famous Fried Artichokes" also dazzle. Instead of the breaded version you're likely expecting, Katie's fries the artichokes sans coating. They are tender (no stringiness whatsoever) and beg to be sopped up with the accompanying concoction of creamy stracciatella cheese and balsamic vinegar.

Brussels sprouts, perfectly charred and glazed in an Italian sweet and sour sauce, are balanced with salty pancetta and a pop of sweetness from currants. Even the most steadfast sprout skeptic would be wooed by this dish.

Not content to limit itself to just one burrata preparation (why should anyone be?), Katie's nods to the mozzarella bar concept with five different burrata and crostini plates. A classic preparation of the luscious, cream-filled cheese is surrounded by figs and prosciutto; another dish sees the cheese breaded, deep-fried and accompanied by grape tomatoes, which have been roasted in the oven to the point that they pop in the mouth. It's the most luxurious take on mozzarella sticks and marinara known to man.

Lee-Collier has perfected her pizza skills over the years, and her efforts result in a crust that leans Neapolitan without being literal. She's not claiming to run a D.O.C.-certified pizzeria, although her pie has the classic fluffy, char-spotted exterior and softer middle. Still, there is more heft in the center than on a traditional preparation, giving her a firmer base to serve as a canvas for culinary exploration. The potato version pairs thinly sliced fingerlings with speck, the Italian cured meat similar to prosciutto; the fat from the meat gilds the tubers, which are set into a bed of scamorza cheese. White onions, rosemary and black sea salt accent the pie with salt and perfume.

"Ted's Meatball" is the gold standard of meatball pizzas. Not only are the halved meatballs tender and perfectly seasoned, they are evenly scattered and small enough that you can enjoy one in every bite. Tomato sauce, fresh mozzarella and pine nuts adorn what is basically a meatball sandwich in pizza form. 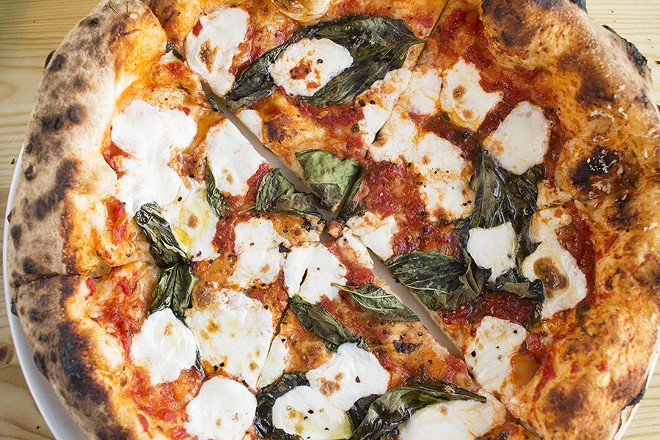 If Lee-Collier has perfected her pizza, then she should be teaching a master class in pasta. Ribbons of silken pappardelle spin around rich wild boar ragu that is kissed with the brightness of lemon gremolata. Wavy strips of arugula-infused reginette pasta serve as the backdrop for a celebration of mushrooms. Forest mushrooms, porcinis and shaved truffles bob in a porcini cream sauce that tastes like brown butter. It could seem too rich, but the sauce is spiked with enough black pepper to cut through the decadence.

An off-the-menu special of truffle risotto was flawless and surprisingly restrained. Rather than hitting you over the head with a truffle oil bomb, the creamy rice derives its subtle earthy flavor from the shaved white truffles sprinkled over the top. It looks, and tastes, like luxury — though the dish that has been haunting me ever since my visit is the lemon strozzapreti, a citrus-scented elongated cavatelli noodle tossed with cream, cauliflower and pistachios. The pasta is tossed in lemon zest, making it at once decadent and bright, two descriptors not often seen together.

Though dessert might seem like an impossible undertaking after such a feast, Katie's ricotta doughnuts proved too tempting to pass up. The warm fritters don't ooze cheese; instead there's just enough there to take the dough from fluffy to rich. Likewise, the vanilla gelato is an understated pleasure, topped with reserve olive oil and black sea salt.

The sweets don't scream at you to impress. Neither do the entrees. If Lee-Collier's experience in the restaurant business proves one thing, it's that you don't need to be loud to have an impact. You just have to find your voice — and after much growth and a lot of hard work, it's clear she's found hers. 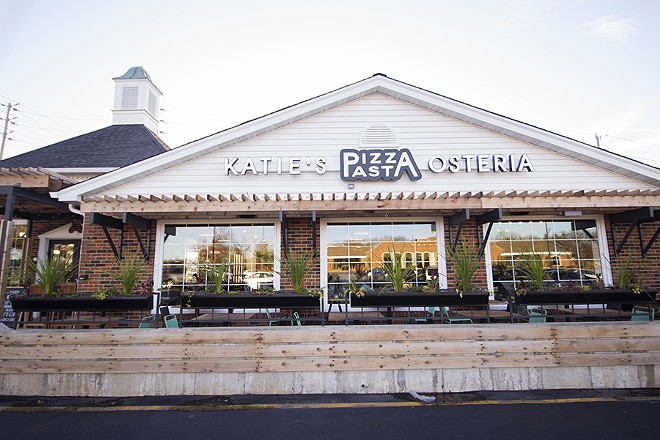