For a decade, Yu Duck Lee, his sister-in-law Hye Keeley and their business partner Dae Yeol Lee have been serving Japanese cuisine at Duck's Central West End sushi restaurant, Kampai Sushi Bar. By all measures, they've achieved success; they have a strong brand, a loyal following and good business. Still, something about their situation left them unsatisfied.

It's not that they didn't love the restaurant or the industry; all three had committed to making their way in the hospitality business and were all-in on that path. The problem was that they had a nagging feeling that they should be doing something much more personal. Cooking Japanese food and preparing sushi was rewarding in its own way, but Keeley, Lee and Lee could not shake the feeling that they wanted to do something that showcased their Korean heritage. They'd been cooking other people's food for years, they thought. Why not take the leap and cook their own?

The trio would get the chance to do that six years ago. During a downturn in business at Kampai's now-shuttered Chesterfield location, they began talking about taking on a new project. Korean food, it seemed, was the perfect fit. Not only would it give them an opportunity to share their culinary heritage with diners, they also had an impressive background to draw upon: Dae Yeol Lee was trained in Korean Royal Court cuisine and had spent years as a chef in the Korean military before moving to the United States. Yu Duck Lee, too, has a substantial culinary background with seventeen years of experience in various kitchens, both in Korea and the United States. Armed with that experience and the desire to show a piece of themselves to the St. Louis dining community, the partners took their Korean brand, K-Bop, to the streets in 2015.

Keeley, Lee and Lee launched K-Bop as a food truck because they wanted to bring their food to as many people as possible in a casual setting. The idea worked, and the brand was so well received that they rolled out a second truck in 2018. Still, it wasn't enough to satisfy demand. Everywhere they went, customers would ask when they were going to open a brick-and-mortar restaurant. The idea has been in the back of the partners' minds for a while, and eventually, they began looking for spaces around town.

Last summer, the three happened upon the former Loop location of Guerrilla Street Food and felt that it had everything they were looking for. After a few months of work, the partners opened their doors on December 9, giving them both a commercial kitchen for their truck as well as a stationary place for fans to enjoy their food. Much like the truck, the space has a lively, vibrant aesthetic. The fast-casual restaurant has a dark blue and bright yellow color scheme, and a mural of the brand's rice-bowl-character logo is emblazoned across the back wall. Roughly ten tables provide seating for indoor dining, while yellow picnic tables are placed around the restaurant's front patio for those who prefer to eat outside.

All of the truck's staples can be found at the new, stationary K-Bop, including the spicy chicken, which features hunks of tender white and dark meat glazed in sweet and fiery gochujang and Korean pepper sauce. The chicken is served over white rice, as well as thin sweet-potato glass noodles with a subtle sweetness that counters the sauce's heat. Julienne carrots and greens garnish the dish, adding a bit of crunch.

Spicy pork, served with the same accoutrements as the chicken, is another hit. Here, the pungent gochujang and pepper sauce underscore the succulent pork's natural sweetness while lighting up the mouth with a pleasant, tingling burn. Spicy tofu is an excellent meatless option; the fried nuggets are crisp on the outside with a custard-like interior, though they are best eaten as soon after coming out of the fryer as possible to avoid losing that wonderful texture. 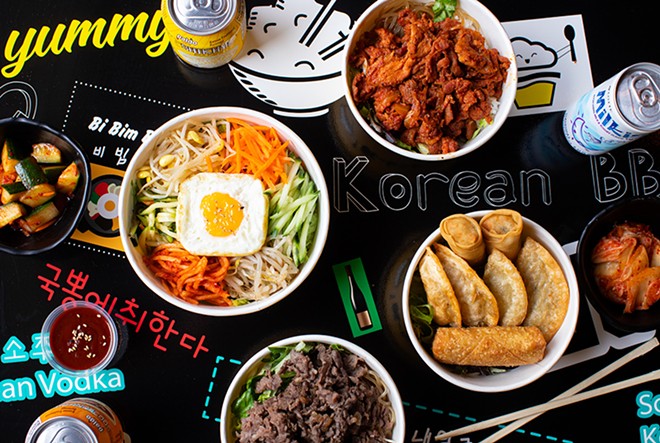 K-Bop also offers bulgolgi japchae, a brown-sugary, soy-kissed concoction flecked with white and green onions and carrots. It's a nice option for those looking to go a milder route, as is the chicken katsu, a thinly pounded white-meat cutlet blanketed in panko breading and fried to a golden crisp. Spicy mayonnaise and sweet and savory katsu sauce (think teriyaki, but richer and less sweet) elevate an otherwise simple dish into something special.

Tteokbokki, a Korean dish of cylinder-shaped rice cakes and flat fish cakes, is one of K-Bop's most exciting dishes. The cakes are tossed in a gochujang-based sauce that at first tastes like tomato sauce, but then reveals an umami-laden sea flavor. For those looking for a taste of traditional Korean street fare on the restaurant's menu, this is where it's at.

K-Bop serves a handful of Korean finger foods, such as mandu, which are golden, pan-fried dumplings filled with seasoned pork and vegetables. The accompanying spicy mayo is an addictive dipping sauce. Vegetable spring rolls, encased in a delicate, flaky wrapper, are another satisfying appetizer.

Keeley notes that the brick and mortar's kitchen is allowing the brand to expand its offerings and to cook things to order, giving diners more of a sense of what she, Lee and Lee are capable of doing. This means that she expects the restaurant to expand its street-food offerings and traditional Korean specialties, pushing beyond what is merely good and convenient and showing the extent of their capabilities. If this current glimpse is any indication, K-Bop's future is incredibly bright.