Jurassic World: Fallen Kingdom Is a Chaotic Mess of a Movie

Steven Spielberg's Jurassic Park, which premiered a quarter of a century ago, had a curiously lopsided quality. It began with very long stretches of exposition — it was, after all, an adaptation of Michael Crichton's pseudo-scientific novel — teasing the audience with 40 minutes or so of Richard Attenborough's character breathlessly describing the details of cloning and Jeff Goldblum's Ian Malcolm tossing off sardonic dialogue about chaos theory before finally getting to the main attraction: state-of-the-art CGI dinosaurs. The digital beasts were impressive, but also a little anticlimactic, bigger than life but at the same time too big to be of much interest dramatically. The film wanted them to be majestic and terrifying at the same time, but it turns out that dinosaurs don't really make convincing villains. They're not malicious or malevolent; they're just there. Humans run from them in terror and the predators willingly follow.

Spielberg followed his film with an unnecessary sequel, The Lost World, which dropped the Science 101 tone in favor of old-fashioned dinosaurs-stomping-through-the city mayhem, but the beasts remained uncompelling, oddly indifferent to the destruction they create. Two more sequels followed (I'll admit I missed both). And now in Jurassic World: Fallen Kingdom, whether they're running from an exploding volcano or wandering around an enormous mansion, they remain as casually destructive as ever. 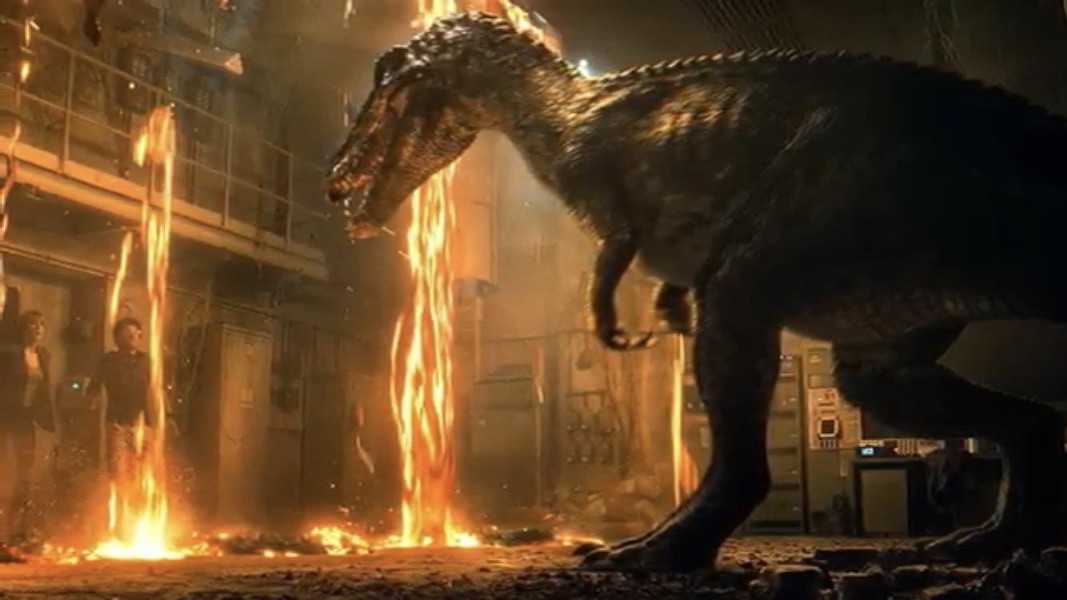 For this fifth tale of dinosaurs among us, the creatures, having been abandoned on their island theme park, are threatened by the aforementioned volcano, while politicians and animal rights activists debate whether they should be rescued. (Jeff Goldblum appears briefly, representing the pro-extinction side.) But if you're concerned that this will become another exercise in Crichton-style pedantry about the ethics of cloning or the irrationality of humans and dinosaurs living in the same environment, worry no more. The new film is a crazy quilt of post-Spielbergian spectacle, dizzily careening through crashes, collisions and carnage without wasting a second on the fine points of storytelling. It's a disaster/horror/action/science fiction movie, each genre played out in five-minute chunks before the filmmakers get distracted by some new turn of events.

The fragments of narrative involve Chris Pratt and Bryce Dallas Howard, returning from the most recent film in the series after being recruited by an elderly millionaire to rescue the endangered dinosaurs. That relatively coherent notion disappears quickly as the film is hijacked by a grab bag of plot twists involving mercenary dinosaur hunters, international arms dealers, evil businessmen and a mysterious child, the millionaire's granddaughter, who crawls around his sprawling mansion spying on events and uncovering her own secret past.

To his credit, director J.A. Bayona does his best to keep up with the shifting tones and unabashed confusion of the screenplay, but a movie like this relies less on direction than on management skills and simple endurance. There's no emotional weight, nothing at stake or designed to stay in your mind from one scene to the next. Bayona wastes an overqualified supporting cast (James Cromwell as the millionaire, Toby Jones as a ruthless American businessman with an unconvincing accent and Geraldine Chaplin, banished to little more than a cameo), while being saddled with a lead couple going through the motions of action-hero-and-heroine without enthusiasm or charisma.The screenwriters don't provide much of a personality for Howard (this is, after all, part of the Spielberg clubhouse: no girls allowed), while Pratt, in comparison, is the contemporary equivalent of every affable 1970s TV leading man who briefly spun his "oh, shucks" appeal into a starring role in a forgettable movie of the week. He's the Greg Evigan of our time.

One minute a character is being chased by a T-Rex or scaling a window ledge, the next they're falling through a ceiling or hiding from a window-rapping beast. For some viewers, the sheer relentlessness may be enough. Jurassic World: Fallen Kingdom is a mess, but it's a headstrong, deliberate mess, as chaotic in its execution as it is in theory.

Those with an eye for detail will notice a few mild and relatively bloodless comments on our current political state. A bad guy refers to a character as a "nasty woman," and television headlines include mild references to a clueless president and global warming (something that Michael Crichton, a longtime opponent of environmental activism, wouldn't have appreciated). This is the state of resistance, Hollywood style: throwaway one-liners on a chyron.