Juliet, Naked Is a Charming Trifle

It's no secret that Ethan Hawke is one of the greatest working actors of our time, a rare example of a former child actor who has gracefully settled into middle age without simply coasting on the residue of his youthful performances. He can bring emotional gravity to a difficult role, as his performance in First Reformed demonstrated earlier this year, but he can also carry a film simply by letting his character breathe, walking through a role so comfortably that his presence outweighs the concerns of plot. In films like Born to Be Blue and even the justifiably acclaimed Boyhood, he's at home in the story, making his presence felt just by passing through. He's a younger, more subdued Jeff Bridges, keeping the relaxed charm without bringing the Zen cowboy attitude.

Juliet, Naked is a modest (which is a polite way of saying "extremely thin") romantic comedy held together almost solely by Hawke's likability. Based on a Nick Hornby novel, it's a lightly comic look at romance and pop-culture obsessions, the latter rendered awkward when the subject of the obsession turns up in the flesh. It's fluffy but sincere, making up for what it lacks in narrative with the simple-but-direct appeal of Hawke and his co-star and uncertain love interest Rose Byrne.

Byrne plays Annie, a 30ish woman trapped in a semi-satisfying job running a historical museum founded by her father in a British seaside town. Her partner Duncan (Chris O'Dowd) is a local professor teaching classes about television. He's a self-absorbed, emotionally stunted, middle-aged man obsessed with the music of his youth — in other words, a typical Nick Hornby character. He's what the hero of High Fidelity would be like if you added twenty years and didn't give him John Cusack's boyish charm. 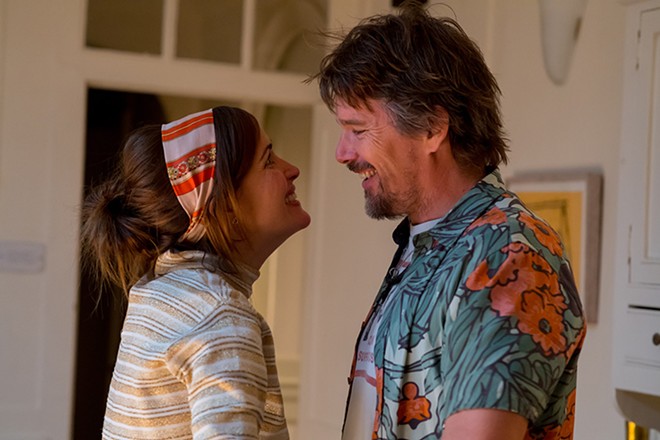 The relationship is fragile. Annie feels drawn to motherhood, but Duncan is against it. He already has a family, a "community of 200 middle-aged men" who follow his fan site devoted to the legacy of Tucker Crowe, an obscure musician who released one album in the '90s before going into seclusion. Annie begrudgingly tolerates her partner's obsession with Crowe's self-pitying music, but when she finally rebels by posting an anonymous dismissal of a collection of unreleased demos, she ends up receiving a reply from the reclusive performer himself. The online conversation continues (note to all contemporary filmmakers: email and text messages remain determinedly non-cinematic material), and when the musician eventually ends up in England to reconcile with part of his extended family, a perfunctory romance ensues.

It's a mildly funny film, even a charming one, but so slight that you have to be willing to stick with it without looking for much of a story. A great deal happens in Juliet, Naked — breakups, a birth, a heart attack — and yet it seems as if hardly anything happens at all. People meet, connect and sing a little bit. (Note to all contemporary filmmakers not named Wes Anderson: Want to score bonus points for you romantic comedy? Come up with an excuse — any reason will do — to have a character sing "Waterloo Sunset.")

At times, the film nearly threatens to turn Crowe into The Tortured Artist as Mary Poppins, dropping in from nowhere to make every relationship magical, but even that is little more than a whim: He's not all that tortured, and the relationships aren't that magical. Faced with a choice between emotional fireworks and simple human emotion, director Jesse Peretz goes with the latter. He's content to let the film coast almost exclusively on the ungrounded presence of Hawke and the emotional vulnerability of Byrne — and ultimately, that's not such a bad decision.