In 1989, Zamir Jahic occupied the top floor of a building on the corner of Gravois and Morganford, a new kid in town from Bosnia via Norway. Like many Bosnians who moved to St. Louis at that time, fleeing the war that divided the former Yugoslavia, Jahic created a life for himself in the shadow of the Bevo Mill. He opened a nightclub, ran a coffee shop, became a U.S. citizen and met his wife, eventually leaving behind the neighborhood and the twirling windmill that had greeted him every morning outside his apartment window.

Eighteen years later Jahic is back in his old stomping grounds — in the exact same building, in fact. But this time he's a restaurateur, not a resident. Every day, before the windmill begins to turn, he arrives to begin stretching the handmade dough that serves as the basis for most of the dishes at his six-month-old restaurant, J's Pitaria.

It's not just the pita that brings him into the kitchen so early. There's the wood-fired somun bread that needs baking, the baklava that needs to be layered and the from-scratch doner meat that must be stacked and put on the spit. Jahic no longer lives in the building, but he spends so much time toiling away on his handmade delicacies, he might as well take up residency in the kitchen.

The work may be hard, but for Jahic, it's a passion that goes back many years. In fact, his love of food is what led him and his wife, Josi, to open J's Pitaria in the first place. Though they met in St. Louis, the Jahics were from the same town in Bosnia and looked back with longing on a particular style of rolled pita that was popular there but nonexistent in the U.S. Lamenting the lack of traditional Bosnian pitarias in St. Louis, they decided to be the solution.

The Jahics were so committed to authenticity, they brought the owner of their favorite Bosnian pitaria to Missouri to help them develop their dishes. But they didn't stop there. Wanting to offer doner kebabs, the handheld pita sandwich popular in Europe, they traveled to the town in Germany where Josi Jahic lived prior to moving to St. Louis and learned how to make them the right way. 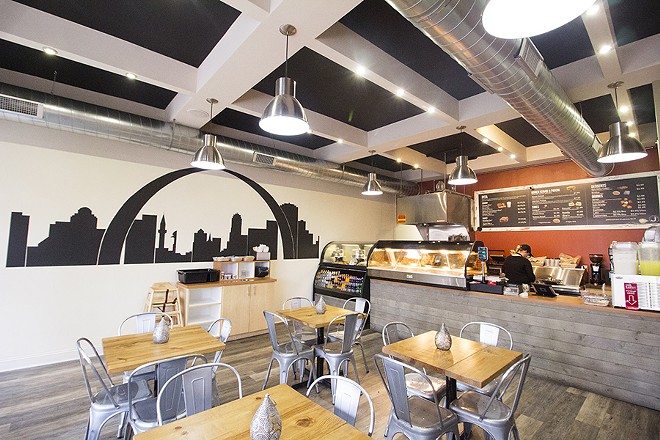 These efforts have paid off in a delightful fast-casual restaurant whose existence underscores the moment that Bosnian food is finally experiencing in St. Louis. J's Pitaria is the latest in a run of terrific new eateries (Balkan Treat Box, Lemmons by Grbic) showing the city what a treasure it has in its Bosnian culinary heritage. And finally, we're starting to pay attention.

How could we not? The moment you step inside J's Pitaria, it's evident that you are in for something special. The space, which Jahic renovated with the help of friends, has a warm, inviting feel, with exposed brick, a window seat filled with earthy-colored pillows and filigree vases on every table. However, it's the glow of the lamps lighting the pita display case that gives the room its warmth — a soft, golden light that keeps the day's selections warm and ready to serve.

That's not to imply that Jahic's pitas sit out all day. Though they are prepped and ready for customers to grab and go, he makes the trays of pita continuously throughout the day, guaranteeing that they are always fresh. That's evident the moment you bite into one of these beauties. Like a blintz made from phyllo, Jahic's pitas are stuffed, rolled and baked to the point that the exterior gets golden and flaky while the interior remains gooey and tender.

The pitas, which are ordered by the pound rather than by the piece, are both sweet and savory. The latter include a simple cheese version, which oozes with mild and gooey kajmak, a housemade buttery spread that is like the lovechild of feta and boursin cheese. The pita is like a pillow-soft, cheesy version of a fried spring roll. You can also opt for a version with spinach added to the luxuriously creamy mixture.

In place of the cheese mixture, cubes of country-style fried herbed potatoes serve as the filling for the potato pita. Black pepper coats the tubers, infusing the dish with just a hint of spice. Not all the choices are vegetarian, however. Jahic also makes a delectable meat-filled pita with seasoned ground beef that's a cylindrical cousin to the empanada. Like the oil used to fry the potatoes, the drippings from the meat soak into the pita, forming a jus-filled stratum that lies just underneath the flaky top layer. 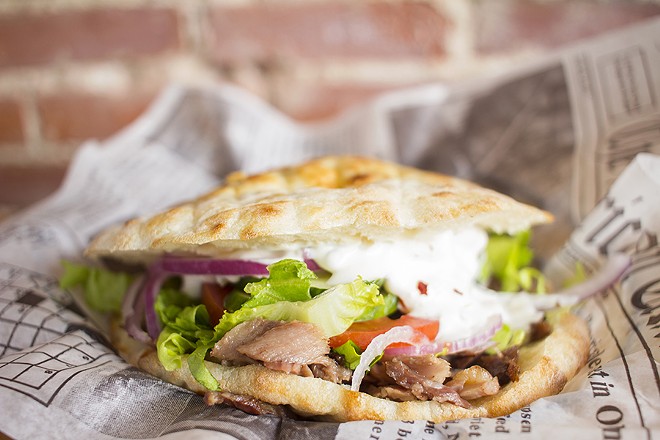 The Jahics also offer a pair of more traditional sandwiches. They take special pride in the doner kebab, and not just because they traveled halfway across the world to figure out how to make it. You'll find many spit-roasted meats in town (gyros in particular) that are processed and frozen. But the doner meat at J's Pitaria is prepared and stacked on the spit in-house. It's extra effort, but it results in an ultra-fresh, tender product that, when sliced, reveals layers of perfectly seasoned beef and fat. Roasting it vertically gives the exterior a pleasant, crisp caramelization that concentrates the seasoning. The meat is then stuffed inside housemade somun, which is like a rustic wheat pita pocket, and filled with fresh vegetables and tzatziki sauce.

The other sandwich offering, a chicken panini, is a molten pairing of marinated chicken breast with tomatoes, spinach, shaved red onions and provolone cheese. Stopping here, it would be a respectable Mediterranean-style melt, but Jahic stuffs these components into kajmak-slathered somun, adding an extra layer of creaminess that subs his buttery cheese spread for the standard sandwich condiments. The result is exceptional.

Though the majority of the pita options at J's Pitaria are savory, Jahic prepares an apple version that's like a pie roulade. The apples are diced into small cubes and seasoned with just a hint of baking spice and not too much sugar, allowing savory notes of the buttery pita to shine through.

His baklava is equally exceptional — a walnut filled delicacy that looks as if it is made with a thousand layers of phyllo, each of which oozes honeyed nectar. And Jahic's krofna, or filled Bosnian doughnut, should earn him a spot on the city's list of top doughnut purveyors. The competition is tough, but these are that good.

They succeed, like everything in this delightful eatery, by being true to their roots, by unabashedly presenting authentic Bosnian cuisine prepared with skill and quality ingredients. Eating a taste of the old country smack-dab in the middle of a new one might have made Jahic nostalgic for his hometown all those years back. Now, though, he doesn't have to be. He's given those flavors a new home.