She Said St. Francois County Prosecutor Jerrod Mahurin Harassed Her. Then He Fired Her 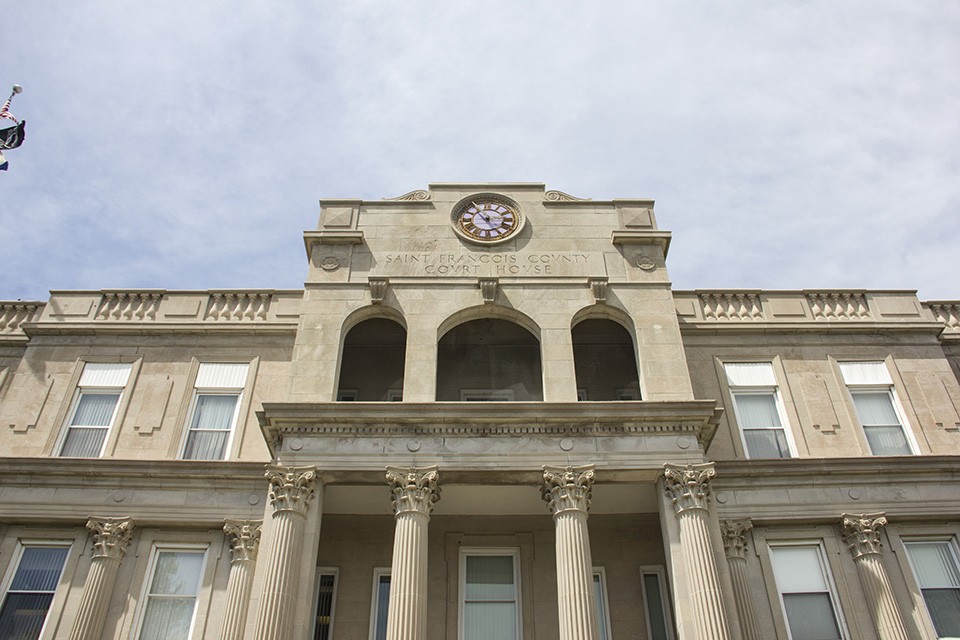 Last month, Mahurin agreed to a sit-down interview with the RFT to respond to the allegations against him. He vehemently disputes the accounts of Davidson and other sources, countering that these allegations are coming from disgruntled former employees.

"I've had several employees that I have let go for various reasons that have said to me, unequivocally, 'I will do whatever it takes to take you down,'" he says.

Mahurin professes no knowledge of employees planning to sue him in 2014, and he says that the subsequent salary increases granted to the clerical staff were not inappropriate. (He points out that the salaries were approved by the county commission.) Responding to the individual allegations, Mahurin says the details are new to him, and that he'd never, as one source claims, been warned that his behavior had crossed a line.

"To hear that there is anybody that has ever thought about filing a sexual-harassment suit is completely surprising," he says.

Mahurin suggests that if there were grounds for a complaint in 2014, someone would have taken legal action. "My guess is, they probably didn't file any lawsuit because there's nothing there," he says. "How do I disprove a negative?"

Avi Kumin, a lawyer based in Washington, D.C., who has represented plaintiffs in sexual-harassment lawsuits, says that even with a lack of hard evidence — such as text messages, photos or recordings — the allegations circulating around the prosecutor's office fulfill the key elements of "severity and pervasiveness" that are usually featured in a sexual-harassment lawsuit.

"You can't look at any of these things in isolation," Kumin says of the accusations.

"If this was one instance, I'd say it's inappropriate but it would not in and of itself rise to the level of sexual harassment," Kumin explains. "But if this is coming within the context of unwelcome sexual comments about their bodies, sexual comments in general, sexual innuendo, sexual advances, and now on top of that there's this other instance where he's showing them sexual pictures, and it certainly adds to the sexual harassment that they're experiencing."

Kumin adds, "Any time you're getting to the dick-pic level, I would say that's probably severe."

But not everyone in the office believes Mahurin's critics. During Mahurin's interview, the prosecutor stated that he knew of several employees who wanted to add their perspectives on his tenure.

Indeed, days after interviewing Mahurin in his office, the RFT spoke with four clerical workers currently employed there. The staffers say they were not pressured by Mahurin to defend him. Each maintains that any sexual-harassment allegations are untrue, and all are adamant that Mahurin has never made sexual comments, pursued sexual relationships or sent explicit photos to their phones. These current employees say there's never been an organized effort, even an aborted one, to sue the prosecutor.

Tammy Clay, who's worked in the St. Francois County prosecutor's office for more than a decade, says that she's never witnessed or been the target of harassment, and that she is appalled by what she calls "slanderous" accusations.

"I can personally say that nothing has ever happened. I've never witnessed it, and I really can't add more than that," Clay says. "I think the office is run very well."

Natasha Kennedy, who joined the clerical staff in 2017, says Mahurin "has always been professional from what I've seen" and maintains that the allegations don't fit the boss she knows.

"I've never had any problems," she says. "I've never heard him speak to anybody in that manner."

That also goes for Henson Gray, who joined the prosecutor's office as a secretary in 2002. Davidson alleges that it's Henson Gray who showed her a dick pic with contact info that indicated it came from Mahurin's phone. But Gray denies ever receiving such a photo.

Stephanie Williams started working at the St. Francois County prosecutor's office in 1996. She got out in 2014, after less than two years under Mahurin.

"I didn't think he was experienced enough to be the prosecutor, and I think the power kind of went to his head," she says.

Williams provided the RFT with printouts of sixteen emails from Mahurin. The emails include threats of summary termination for those who had apparently made the mistake of crossing him — even in seemingly minor ways.

In a May 2013 email, Mahurin wrote, "It has come to my attention that some of you think that I have shown favoritism" as to whom received a previous email admonishment.

To Mahurin, this was a serious offense. "I will give you to the end of the day to express those concerns to me personally," he continued. "If you do not, I will assume you have no respect for me or my position and no longer need to work for me."

He added, "I will not tolerate insubordination in this office and I am tired of the childish games."

"It has come to my attention that one of you has disobeyed an order I gave with regards to the day we went to [H]otshots," he began in an email dated November 3, 2013. The outing, Mahurin wrote, was intended as a "teambuilding exercise" — even though it was held at Hotshots, a sports bar in Fenton, 50 miles away from the courthouse.

The trip apparently required utmost secrecy. In the email, Mahurin reminded the employees that he'd specifically told them "no one was to discuss any events regarding the day with anyone outside the office."

Williams says she remembers the day well. It was September 11, 2013. "He closed the office around 11 a.m.," she says. "There was a couple of us who didn't want to go, but we were worried that if we didn't go we'd be blackballed."

This email carried the subject line "office policy and protocol," a dry title for the several paragraphs of angry prose below. Mahurin wrote that someone had leaked information about the outing, blabbing to "a friend or family member" — and here he bolded and underlined the words — "that I would have docked your pay had you chosen not to attend." In the email, Mahurin doesn't deny making the threat.

The email continued, furiously. Mahurin wrote that the leak of "inner office communication" meant someone was trying to take "a shot" at him. But, he added, he would allow the person who'd leaked to come forward and address it with him personally.

"Since all of you are here today, I will assume that this problem will be rectified immediately," he wrote. "Should you choose to not tell me which one of you disclosed this message, when I confirm it, you will be fired immediately and I will contest your unemployment because of insubordination and cover up."

Today, to the RFT, Mahurin says he doesn't remember writing the email, insisting, "I don't send emails, and I don't send office-wide emails."

"If someone is making a claim that I sent a document that I did not send, I guess I'll have to speak with an attorney regarding defamation, or turning [sic] it over to another prosecutor for an indication of forgery charges," he says.

That "someone" is Williams, and she insists the email is authentic. She says she was also the leaker who spilled the details about the 2013 Hotshots outing, though she says it was by accident. She'd relayed her concerns about the trip to a family member, and, St. Francois County being as small as it is, word got back to a secretary, who then fed it Mahurin. His reaction scared her.

"I just figured it was a matter of time before I'd be gone," she says. She called in her remaining sick time and made her retirement official in 2014. "It was time for me to go."

It wasn't the way she'd planned on leaving, but compared to Davidson, she had it easy.