Jerk Soul Will Knock Your Socks Off

You may think you've had jerk chicken before. You may have even enjoyed it. But you may not want to tell people that before you try "Judah's Jerk Chicken Entrée" at Jerk Soul. Tasting it, you'll realize jerk is so much more than a seasoning blend you sprinkle over meat to give it some kick. It's an entire process for cooking chicken. And it's simply breathtaking.

At this takeout-only spot in north city, owners Zahra Spencer and Telie Woods begin with a marinated half-bird that is dry-rubbed in fiery seasoning, smoked for several hours and then finished on the grill. The woodsmoke and grill char underscore the thyme-heavy seasoning's earthy taste, while chiles give it some heat on the back palate that creeps up on you, building with every bite. A subtly sweet sauce — almost like a zesty tropical barbecue — is drizzled atop the chicken, giving it just a touch of sweetness to mitigate the heat. But even if there was no seasoning, its succulent meat and crispy charred skin would be pleasurable enough. It's inarguably the best jerk chicken in town. 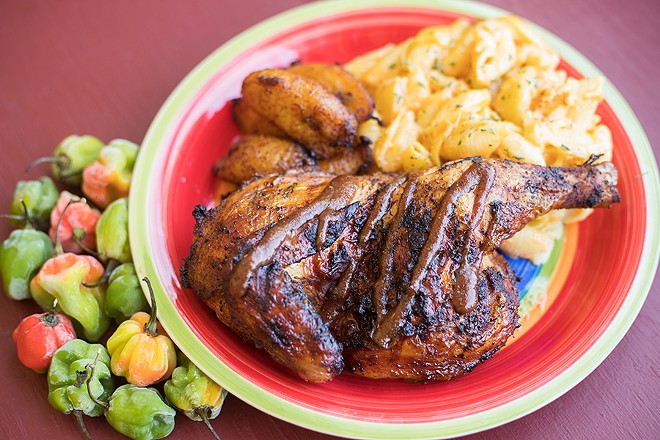 And it owes its existence to a series of calamities. When Spencer and Woods talk about their restaurant dreams being washed away by Hurricane Irma, they are not speaking metaphorically — the tiny beachfront shack they were preparing to open was literally swept out to sea when the catastrophic storm hit the island of St. Thomas in September 2017. No amount of boarding up or sandbagging could have saved it; the entire beach simply vanished, sweeping everything on it into the churning ocean.

Looking back on the chaos in the first few weeks after Irma, Spencer and Woods can now see a straight line leading them to St. Louis' Hyde Park neighborhood. However, their path was unintentional. Woods would have never ended up in St. Louis if not for the chaos following the storm. He'd only moved to the island to be with Spencer a week before Irma hit, and his worried family begged him to return to his native Chicago. He agreed, said goodbye to Spencer and — with St. Thomas' airport destroyed by the hurricane — boarded a boat bound for Puerto Rico with the intention of catching the next flight home.

However, it became clear immediately upon his arrival that Puerto Rico was about to take a direct hit from a second hurricane, Maria. Desperate to get out, Woods enlisted the help of a friend in St. Louis. She got him on the last flight off the island before Hurricane Maria hit, bound for St. Louis and an uncertain future.

Woods was only supposed to stay in St. Louis for a few days. But he was charmed by the city's neighborhoods, and Hyde Park in particular. He found himself wondering whether it was a good place to open a restaurant. He didn't take long to decide on an answer: Within three days, he'd signed a lease for what he was convinced was the perfect restaurant space and convinced Spencer to join him in the Gateway City.

It took roughly four months for Spencer and Woods to hone their concept and convert the storefront on Salisbury into a Caribbean fusion takeout counter. Because Jerk Soul was the first tenant in the newly refurbished space, there was little to do in terms of buildout. The pair simply decorated the small vestibule in front of the order counter with charming floral arrangements, Caribbean knick-knacks and several inspiration plaques, then opened the doors to customers in April 2018.

Drawing heavily upon Spencer's St. Croix heritage, she and Woods have created a menu of the traditional recipes she learned to cook from her grandmother, mother and aunties even while incorporating Woods' upbringing in Chicago, where he learned how to cook soul food from his grandmother. Some dishes are fused, while others exist as side-by-side offerings — and every last time, they are utterly delicious.

"Judah's Jerk Chicken Entrée" is a terrific place to start. But curry chicken, another of Spencer's traditional specialties, is also dazzling. Hunks of tender white and dark meat are simmered in warmly spiced curry broth that is accented with tomatoes and bell peppers. The curry is delicate in texture, almost like a jus; one of the dish's biggest pleasures is getting a chunk of sauce-saturated potato and letting it melt on your tongue. 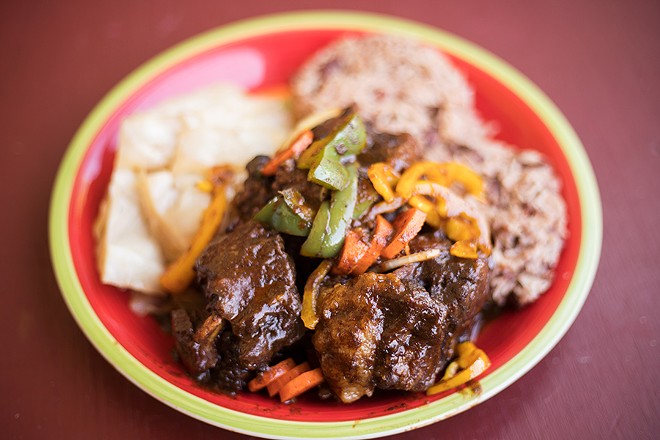 Spencer has memories of standing on a stool in her grandmother's kitchen learning how to make saltfish. Those lessons paid off years later in the form of Jerk Soul's magnificent rendition of the classic dish. Pieces of salt-cured cod are sauteed with tri-color bell peppers and tomatoes for an intense flavor — like cod with an exclamation point. The texture is almost that of crab legs, with a subtle sweetness reminiscent of what you find in shellfish. That flavor is only intensified when the dish is paired with a side of fluffy coconut rice.

You could also opt for a side of Caribbean corn, a cob-on presentation that is charred on the grill and finished with mouthwatering curry spices. Plantains are another excellent option for an accompaniment, though they could double as dessert. The banana-like fruit is sticky in texture, as if it's been glazed in brown sugar, but the sweetness is offset by a touch of caramelization rendered by its time on the grill.

These delectable Caribbean accompaniments stand shoulder to shoulder with Woods' renditions of classic soul food side dishes, including a wonderfully pungent stewed cabbage, its vinegary flavor calmed with a touch of sugar. Woods also delivers wonderful mac and cheese, courtesy of his grandmother's secret recipe. The orange cheesy shells are just the right amount of richness, with a hint of spice that is barely noticeable but subtly brightens the dish.

Spencer and Woods marry their individual expertise on such items like the jerk chicken pizza, a seemingly simple dish by its description — tomato sauce, mozzarella and jerk chicken — but one that impresses with deep, smoky flavor in every bite. Another fusion success is the "Crispy Philly," a deep-fried Philly cheesesteak that takes standard ribeye and amps it with jerk seasoning to cut through the decadence. 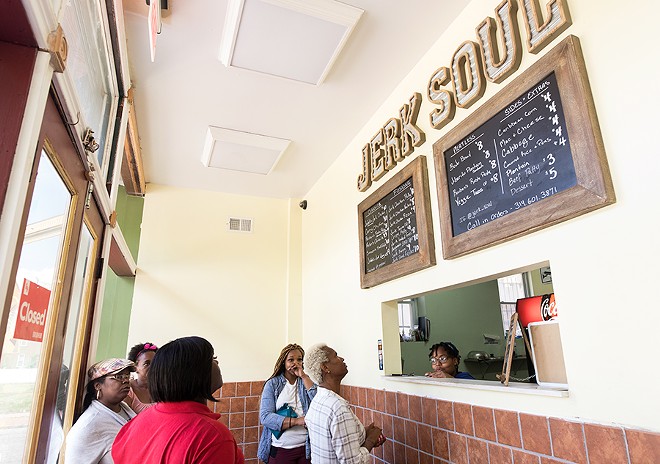 As good as these dishes are, though, I can't stop coming back to that jerk chicken, a dish so perfect it continues to haunt me many days after my visits. Spencer and Woods said that they opted to start out with only a takeout counter because they wanted to get their feet underneath them; this is their first restaurant, and they needed to make sure they were ready for a sit-down place. Once they prove themselves, they will look to expand to a full-service concept — one that will be an immersive Caribbean experience with everything from a bigger menu to live music.

When that day comes, I pity the house band; Jerk Soul's food sings so beautifully it will drown out anything else under its roof.