When Joe Smugala had the opportunity to take over the old-gas-station-turned-restaurant at the corner of Macklind and Bischoff, he did what any self-respecting south-city dweller would do: He called up his daughter's friend from grade school.

It's an origin story that is as peak St. Louis as Provel-covered t-ravs gobbled down with a concrete. A restaurateur in his own right, Smugala wanted to bring a barbecue concept to the spot in the Hill neighborhood, which he'd purchased with his brother, John, and their wives Kerri and Linda. However, his background was in pizza, not barbecue. Digging deep into his south-side connections, he knew just who to call for help in realizing his vision.

That person was Alex Cupp, who, in addition to being his daughter's dance partner as a seven-year-old, had played select soccer for Smugala several years later as a student at St. Louis Community College at Forest Park (Smugala was the coach). Of course that was before Cupp became one of the city's top pitmasters, and though he had enough on his plate running his own barbecue restaurant, the Stellar Hog, Cupp made time for an old friend. With his help, the Smugala brothers learned enough about barbecue to open J. Smug's GastroPit and compete in the city's crowded smokehouse scene.

Last July, the Smugalas fired up their smoker and opened their doors, bringing a missing genre to the Hill in a space that, while cute as a button, has had a difficult time keeping its occupants. Originally Rizzo's Station Pizzeria, then Leonardo's Kitchen & Wine Bar and, most recently, Leonardo's Burger Kitchen, the building's quaint charm has also been its Achilles heel. Comprised of two rooms too small to house a full-scale dining area, the former gas station can fit only four two-person tables, a wall ledge and a bar, relying on an enclosed (yet not air-conditioned) patio and some outdoor tables to handle the majority of its seating. If you've lived through even one sweltering St. Louis summer or dreary, bone-chilling winter, you know those options are attractive only about three weeks out of the year.

But where the other restaurants have failed, J. Smug's seems to have found a winning formula, banking on a concept that, while enjoyable on site, is just as attractive for takeout. You only need observe the steady stream of customers walking up to the counter for their call-in orders to realize that the key to its success is as much the lady enjoying some ribs in the comfort of her armchair as it is the dine-in patron.

For those who want to eat in, however, the Smugalas have created a cozy scene, maximizing the real estate to make it seem somehow less small. The most striking update is the front room; the old order counter and grab-and-go beverage cooler have been replaced with a proper bar that seats eight people. With shiny white walls as a backdrop, a stone bar top to rest your elbows upon, and cool red-and-black overhead wiring that evokes the industrial materials you'd find at the auto mechanic's, J. Smug's bar is the sort of neighborhood watering hole that could turn you into a regular — and its impressive craft-beer selection certainly doesn't hurt its case.

Nor do the ribs, the restaurant's standout dish, which are simply dazzling. J. Smug's smokes a dry-rubbed version, and, more than others in town, their generous, salty rub forms a thick crust that actually crunches when you bite into it. It's reminiscent of the bark you get on a well-prepared brisket, and just as deeply smoky. Underneath this crisp, seasoned layer is succulent, cherry-wood-scented meat that has the proper chew you get from good ribs but still yields without too much effort. They're some of the finest in the city, the restaurant's clear standout.

If the ribs are a study in differing textures, the pulled pork is singular in its silken mouthfeel. Succulent meat drips in a mélange of spice rub and rendered fat that makes you want to eat it with a spoon. Of course, you can simply sop it up on a bun in sandwich form, though the pleasure of eating hunks of the decadent meat bare-handed, with no other accoutrements, is positively primal.

About three months ago, the Smugalas hired a new pitmaster, Carlos Hernandez, who has added a few items to the menu, such as the smoked turkey. The meat is sliced into thin strips, its exterior coated with a black-peppery spice blend that calls to mind Cajun blackened seasoning. The rub is delightful, standing up to the smoke that permeates the delicately flavored bird. However, the meat was dry, one of the few instances here where I would reach for the sauce.

The pulled chicken was also not as moist as I would have liked, though better than the turkey, and its seasoning was gentler. Bits of coarsely ground black pepper spiked the meat throughout; when paired with the restaurant's rich, molasses-like sauce, it's a pleasant mix of sweet and spice.

I'm positively fanatical about brisket (and in my book, it goes without saying that I mean Texas-style). I found J. Smug's to be adequate, but not earth-shattering. With its thick slices, crumbly texture and faintly licorice-like bark, it gets close, but it was simply not fatty enough. There is possibly no more powerful an edible pleasure than biting into a piece of caramelized brisket fat, but that sensation was missing here. The brisket's obvious lack of fat also made the meat a bit too dry. 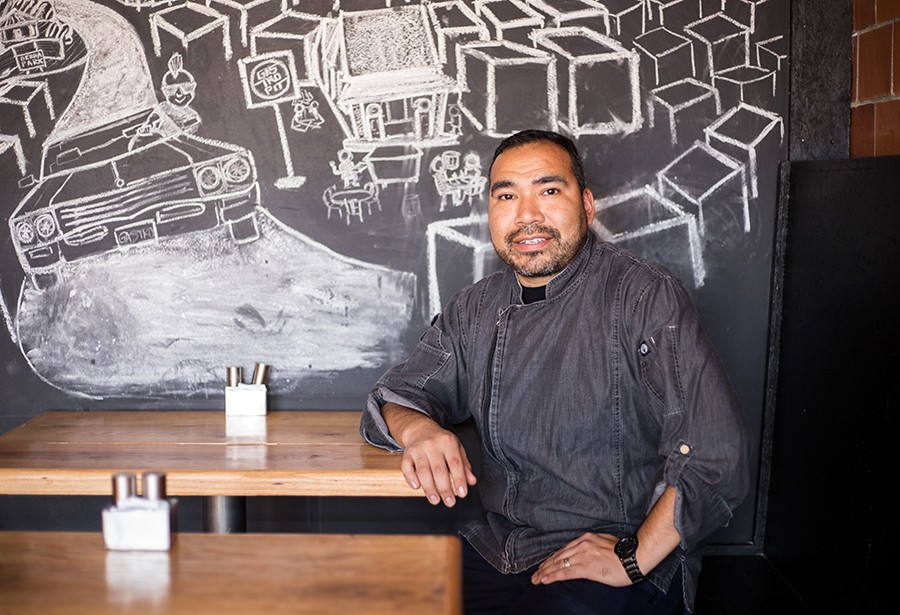 The brisket burger, on the other hand, is outstanding. Though overcooked on one occasion (well-done and then some), on two others it was spot-on: a perfect medium pink throughout and kissed with smoke to give it that quintessential backyard taste. It's the burger you would get if you invited Thomas Keller to run your cookout.

Ground brisket also plays a starring role in one of the standout appetizers, the smoked meatballs. Though technically a starter, these plump, mandarin-orange-sized beauties were satisfying enough I would have happily made them a meal. As a nod to the neighborhood, they sit atop a ladleful of chunky marinara sauce and are crowned with melted Provel cheese. Sure, you could get something similar down the road, but "similar" is the key word — the smoky flavor that permeates the brisket is unlike anything you'll find at one of the neighborhood's trattorias. 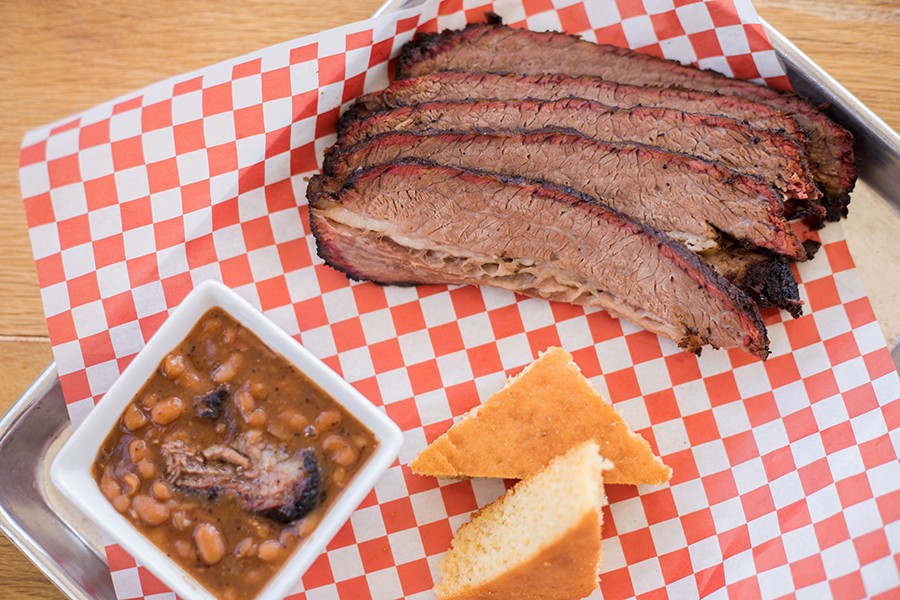 You will want to put nothing on that meatball but your fork. However, J. Smug's does offer sauces for its more condiment-friendly meats, ranging from sweet and brown sugary to mouth-puckering Carolina to a savory Memphis style with the oddly pleasant distinction of tasting like a slightly sweet bloody mary. If you want something more original, the Dr. Pepper barbecue sauce is the most interesting — and, unexpectedly, the restaurant's spiciest. The teeth-tingling soda might be the sauce's namesake, but it's not the forward flavor. Instead, the sugary drink provides a canvas for deep chile and black-pepper spice that hits you on the back of the palate. It's excellent poured over that pulled chicken.

J Smug's side dishes and accompaniments are standard barbecue fare — crispy coleslaw, a typical Italian-greens salad, an above-average creamy potato salad and a pepperjack mac and cheese that, though laden with jalapeños, needed more flavor. Baked beans, however, are a standout. More pork stew than mere side dish, the beans are steeped in pork drippings and sweet without being sticky. They'd be my favorite accompaniment unless you count the deviled eggs that appear on the happy-hour menu. Hard-boiled to a firm yet silken texture, the eggs offer a yolky filling so velveteen it could double as hollandaise. I'm enamored.

Those eggs are the sort of picnic fare you'd find alongside macaroni salad and a Jell-O mold on a long folding table in a south-city church basement. They're about as St. Louis as it gets, from a restaurant steeped in the connections that make this place so lovely — and one that, while still finding its way, is serving food that nourishes its people, one rack at a time. 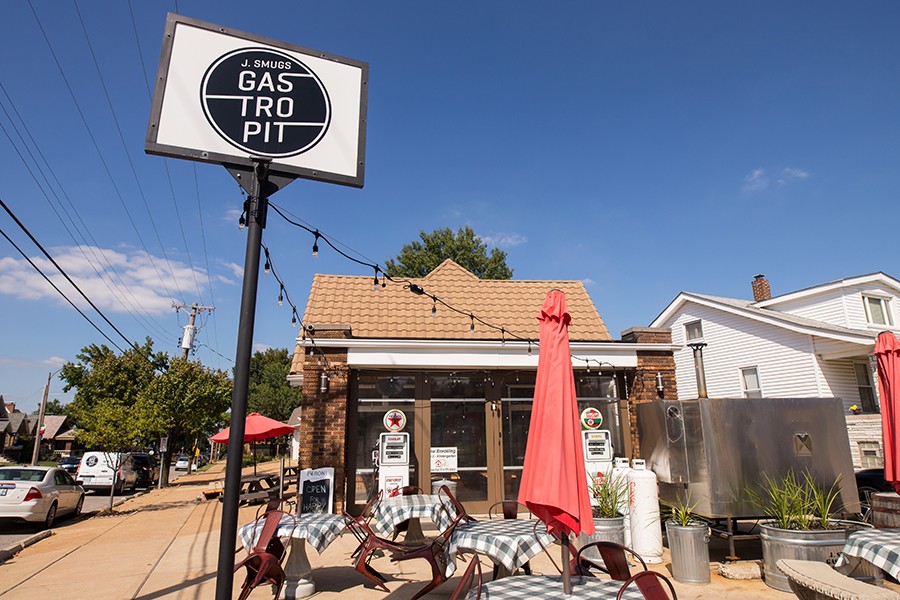