J McArthur's does not have a craft-cocktail list. Its current wine feature is a merlot, and there isn't a Mason jar to be found in the place. The tables are white-clothed, the napkins are linen (not bar towels), and the color scheme is pale mustard yellow and brick red.

In some ways, it reads like a sort of quintessential American bistro, the type of place that went out of fashion in the early Aughts, even before molecular gastronomes made foams a thing and well before the ensuing overcorrection that put chicken and waffles on what seemed like every menu in the land.

What could make J McArthur's seem dated, though, is precisely what makes it so relevant ­— it exists as a reminder to us trend-chasing, food-obsessed folks to stop for a moment and reflect upon timeless cuisine, classic flavors and why seasonal cooking built around relationships with local producers never goes out of fashion. 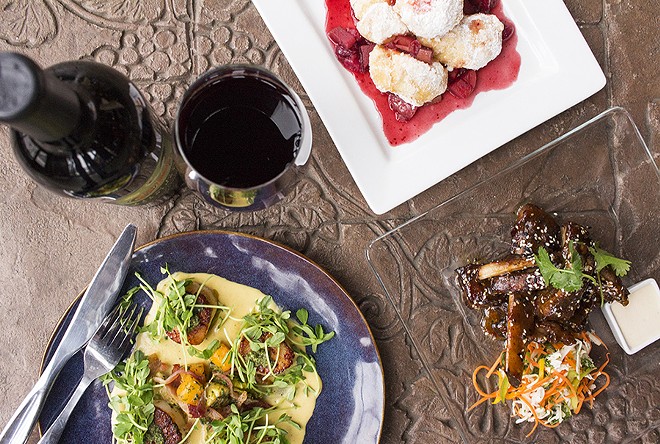 Credit goes to chef Ben McArthur, who nails the concept with near-flawless execution. Consider his pork presentation. It's nothing that breaks the mold — just a salt-and-pepper-seasoned bone-in chop grilled to a perfect medium rare. He sources the meat from Todd Geisert Farms, and the quality is apparent: The meat is so juicy, it tastes as if it has been doused in sauce rather than the natural pan juices that result from cooking such a beautiful piece of meat.

And, indeed, the chef has fortified those juices with a touch of butter and pork-bone broth that has cooked so long it almost tastes like pork caramel. Then he places the chop alongside sweet-potato gnocchi, pickled red onions and some wild arugula. It's a textbook preparation that shows why "conventional" doesn't have to be a dirty word.

J McArthur's, named after the chef's father, John, opened last July in Lindenwood Park with little pomp and circumstance. McArthur describes the concept as "American regional specialties with a twist," though he could have just as accurately said "Remember that iconic spot Harvest? Yeah, we are its heir apparent." The white tablecloths bespeak fine dining, but the restaurant is hardly formal — a testament to the family atmosphere that permeates the place.

On any given evening, you'll see McArthur's wife helping to seat tables, his father recommending wine for bar patrons and his stepmom making sure diners are enjoying their entrées (The woman has a sixth sense that is rare, even amongst seasoned servers. She noticed I had a concern about my entrée by the way I poked it with my fork.)

McArthur commands the kitchen, but his touch is subtle. The St. Louis native honed his craft under James Beard Award-nominated chef Keith Rhodes in North Carolina before returning to his hometown for culinary school. His time spent on the coast is evident in the way he prepares seafood. Smoked scallops, seared medium-rare in a cast-iron skillet, are cooked so perfectly that that their crisp top and bottom exteriors yield to buttery meat. The sugary notes of the accompanying butternut-squash puree bring out the scallops' subtle sweetness, while hunks of bacon reinforce the subtle smokiness of the dish. A few roasted Brussels sprouts and a handful of butternut-squash pieces garnish the plate.

The red snapper is another example of McArthur's seafood prowess. The delicate fish — again, perfectly cooked — rests atop leek soubise. The creamy sauce is so subtle that it accents, rather than covers, the fish. It soaks into the accompanying polenta, forming a rich sauce for the snapper. 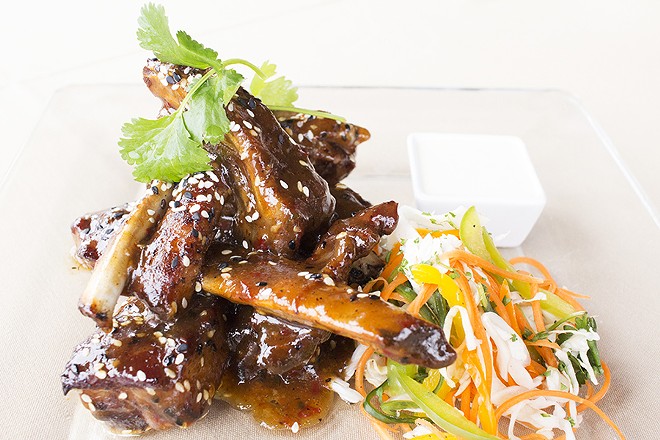 But McArthur is equally accomplished on land. One evening's special offering, a pot pie, was filled with succulent pulled pork and seasonal vegetables that oozed out of the buttery shell — a hybrid of grandma's pot pie and a barbecued-pork sandwich.

The revelation of the evening, however, was the Missouri Wagyu beef burger. The meat was juicy beyond what would be expected from even the most marbled meat, to the point that I had to inquire. "I'll let you in on a secret," our server said. "Duck fat. He mixes the meat with rendered duck fat." The result is a burger that is so shockingly well seasoned and moist it deserves a place in the pantheon of all-time-great St. Louis burgers.

Pearl barley risotto is another standout. On its face, the dish is quite basic: cream, barley, vegetables and herbs. But the barley is cooked flawlessly — it almost pops in the mouth, giving texture to an otherwise rich dish. A bit of truffle graces the plate so softly you almost don't realize it's there.

Of the small plates, the spare ribs were the favorite. McArthur cooks the ribs for sixteen hours so the meat takes on the texture of luxurious pork belly. It's served on the bone, though it slides off with barely any prodding. He glazes the meat with a Thai-inflected barbecue sauce, but serves the ribs with Alabama white barbecue sauce. It seemed like an odd pairing, but the mix of tangy cream sauce and Asian flavors worked surprisingly well.

The street tacos, however, could have used a similar touch to enliven them. The tortillas were supposed to be stuffed with chorizo-seasoned pulled pork, but the spice was too subtle to make any impact.

That impact was reserved for what is one of the best sweet offerings to grace our fair city in recent memory: J McArthur's beignets. Having never been to New Orleans, I can't say whether this version is authentic, but I don't really care. Such intellectual distinctions are irrelevant when you're enraptured by one of these fluffy, powdered-sugar-coated poufs. A deep-fried hybrid of crème brûlée and a cumulonimbus cloud, these treats dissolve into an essence of sweetness the second they hit your tongue.

When you think about it, there isn't really anything revolutionary about a beignet. It's basically flour, eggs, yeast and sugar. Pairing pork with apples or scallops with butternut is pretty straightforward as well. But like the glorious fried dough balls, chef McArthur shows how good ingredients, cooked impeccably and without too much manipulation, can transcend from the ordinary into something spectacular. That kind of cooking is always in style.