Is Terror Tacos' (Vegan) Burrito the Best in St. Louis?

Brothers Bradley Roach and Brian Roash have been vegans since the mid-'90s, living the plant-based lifestyle before it was as mainstream as it is today. Over the years, they've been heartened to see vegan food's rise in popularity and, with it, easier access to vegan food, including restaurants specializing in plant-based cuisine. There was just one problem: Those restaurants just aren't their thing.

It's not that Roach and Roash have some deep-rooted dislike for vegan restaurants in general; Roach even worked as general manager and head chef at the Demun spot Seedz Café for five years. The problem was that none of the vegan eateries they encountered really spoke to them in terms of the vibe and aesthetic. The brothers first became vegan while active in the hardcore music scene in the mid-'90s, viewing their choice more as a political statement than a dietary one. In their minds, veganism had that irreverent, loud, in-your-face spirit, so it was jarring to them to see the movement become dominated by a more crunchy, peace-and-love hippie scene. As Roash jokes, he's all for peace and love — he's even married to someone he describes as a hippie — but it just wasn't their style.

Roach and Roash would often muse about opening a vegan restaurant of their own one day, but they never really went anywhere with the idea. Instead, Roach got into the corporate call center life while Roash embarked on a front-of-house restaurant career. However, when Roach eventually grew so weary of his corporate gig and moved to St. Louis to take the job with Seedz some years ago, their talks grew more and more substantive. 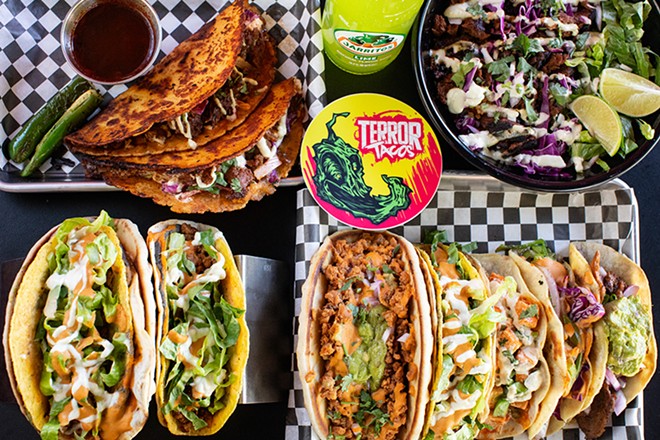 Last year, those musings reached a tipping point and morphed into a bona fide search for a space to realize their vision for a hardcore, underground-style vegan restaurant. Aided by a friend in the local vegan restaurant scene (who requests to remain anonymous), the brothers zeroed in on the old Baida storefront on South Grand and immediately realized it was the perfect spot. After a few months of work converting the former Moroccan-themed space into a dark, edgy scene, the pair opened the doors to their restaurant, Terror Tacos, this March.


It's immediately clear that Terror Tacos is not your typical vegan restaurant when you walk in the door. Instead of the stereotypical breezy, granola vibe, the brothers' place hits you over the head with loud punk-rock music and eye-popping neon paint splashed graffiti-style against black walls. The pair wanted the fast-casual restaurant to evoke the hardcore clubs they used to go to back in the day, and they've captured that aesthetic perfectly.

The food is another indicator of their determination to buck the standard vegan playbook. The entire menu at Terror Tacos has the sort of feel you'd get from a greasy burrito joint you'd frequent after attending a Fugazi show rather than a crunchy smoothie spot to hit after yoga. The offerings are unapologetically big, greasy and bold, such as the Double Diablo Taco, which wraps a crunchy taco stuffed with seasoned veggie grounds, chipotle cheese, shredded lettuce and sour cream inside a flour tortilla filled with green chili, black beans and cheese. This double-decker concoction is supremely satisfying; the grounds and beans combine for a rich, rustic refried bean texture with so many layers of flavor and spice that make it not just an excellent vegan dish. It's an excellent dish, period. 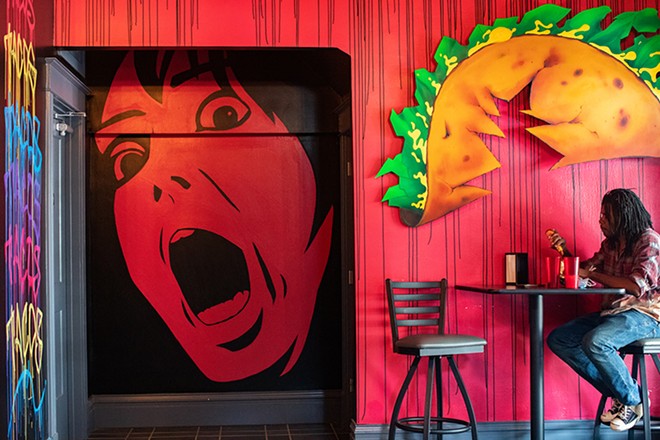 The Green Chili-Lupa is another hit. Here, a soft, grilled pita is stuffed with green-chile-seasoned veggie grounds that magically have the texture of crumbled bacon. Cilantro, diced red onions, chipotle cheese and a generous slather of luscious guacamole round out this outstanding offering. Equally satisfying is the Buffalofu Taco, featuring hunks of perfectly cooked tofu tossed in piquant Buffalo sauce, then garnished with jalapeños, green onions, cilantro and vegan ranch. The taco sets your mouth on fire, but it's a sweet, sweet burn. 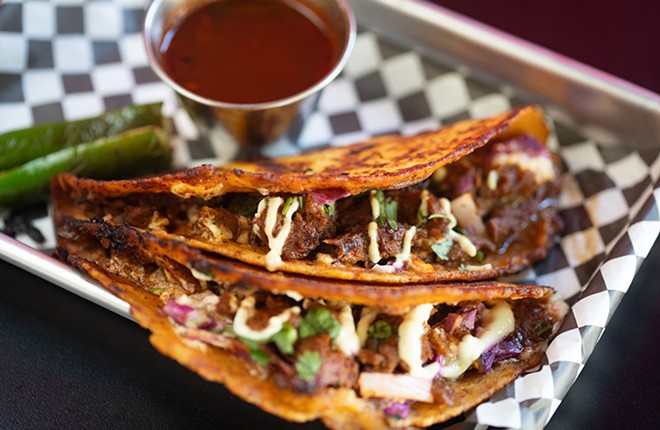 The hits keep coming. Terror Tacos gets with the birria trend with its vegan version of the popular Mexican dish. Here, a shockingly greasy-in-the-best-way quesadilla is filled with plant-based consommé-marinated seitan, sour cream, red cabbage, onions, cilantro and jalapeños. The dish is served with a side of the consommé for dipping, which tastes of smoky chiles and mild cinnamon. That a vegan dish can have you dripping its contents to your elbows is a pleasant surprise.

The Carnage Asada Burrito is a gargantuan, overstuffed wonder of housemade seitan that is akin in texture and flavor to gyro meat, grilled bell peppers and onions, fluffy cilantro rice, sour cream, guacamole, lettuce and chipotle cheese. This should be added by all of St. Louis' new medical cannabis patients to the list of munchies must-haves, as should the Loaded Nachos, which look like something Cheech and Chong might have come up with during a fever dream. A mound of tortilla chips is piled sky-high with chipotle cheese, those excellent veggie grounds, black beans, raw red and green onions, lettuce, salsa, sour cream and guacamole. To this omnivore, there is no better plate of nachos in town.

Dare I say there might not be a better burrito than the Terror Burrito? I might leave all the carnitas and carne asada in the world behind for a bite of this outstanding mix of veggie grounds, cilantro rice, beans, cheese, green chile sauce, lettuce and sour cream. The grilled tortilla is so overstuffed that, when you cut into it, its contents ooze out in this beautiful, creamy mess.

It's impossible to eat the Terror Burrito — or really any of the dishes at Terror Tacos politely. One after another, the restaurant's dishes are filled a little too much, brazenly spicy and deliciously oozy — and that's exactly the point. That vegan cuisine can be so thrilling is a real eye-opener to those of us who still cling to the clichés of it being haute-hippie health food. St. Louis owes Roach and Roash a significant debt of gratitude for showing us the light. 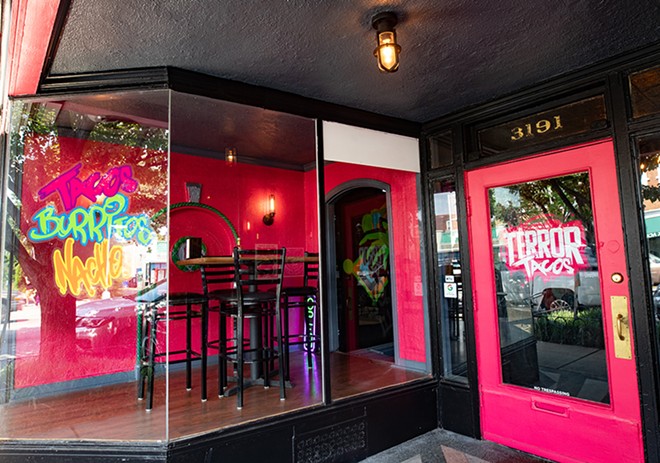