Inside the Race for Board of the Aldermen President 2019

Jamilah Nasheed and Megan Green want to disrupt St. Louis. They'll need to beat Lewis Reed, and each other

If St. Louis government were a game of chess, the president of the Board of Aldermen would be the queen. It is a unique position: Empowered in both the city's legislative and executive branches, the board president can wield power both in offense and defense. It's equally capable of holding its own in a fight or just holding ground against an advancing opponent.

It's a position Lewis Reed has held for twelve years.

In reality, there's almost no game at St. Louis City Hall that a board president can't win. Unlike the mayor, he can vote on and sponsor bills. He can also shuffle legislative committees at whim and set the pace of the lawmaking process. In the city's most powerful executive body, the Board of Estimate and Apportionment — through which all budget and contract decisions are approved — the president holds one of three critical votes.

Granted, if St. Louis government were a game of chess, it would be a psychotic's version; the players would include 28 aldermen as potential allies or opponents, plus the mayor and comptroller, who when allied together can make even the president seem irrelevant.

It would also be a terribly difficult game to win. The president isn't elected by those in a position to judge his effectiveness; instead, he runs in a citywide popularity contest every four years, vying for votes from an electorate with little knowledge of aldermanic machinations.

After beating then-board president Jim Shrewsbury in 2007, Reed cruised through two more elections without a single challenge to his presidency from inside City Hall. But this year's Democratic primary is different. He faces two major challengers: Alderwoman Megan Green and state Senator Jamilah Nasheed (D-St. Louis). Both charge that Reed has played the pawn to the forces of privatization and business interests, and that he's isolated himself from the other branches of city government at a time when cooperation and leadership are in dire need. Both say that if you're unhappy with the status quo in St. Louis, your best move is to vote against Reed.

The election's timing couldn't be more impactful. The next board president will preside over efforts to win an MLS soccer team, ongoing steps to privatize St. Louis' airport (or halt it), an epically contentious proposal for a city-county merger — and on top of all that, oversee the Board of Aldermen's controversial reduction to fourteen seats by 2023. All of that is in addition to the usual challenges inherent to a city like St. Louis.

With the city's Democratic Party increasingly split into two, if not more, factions, voters are left with three strong candidates providing competing visions for what St. Louis should be, and how it should be governed.

"At the Board of Aldermen we run a very wide gamut of what it means to be a Democrat on an ideological spectrum," Green points out. "There is often an assumption that all Democrats think and feel the same. I don't think that's necessarily true." 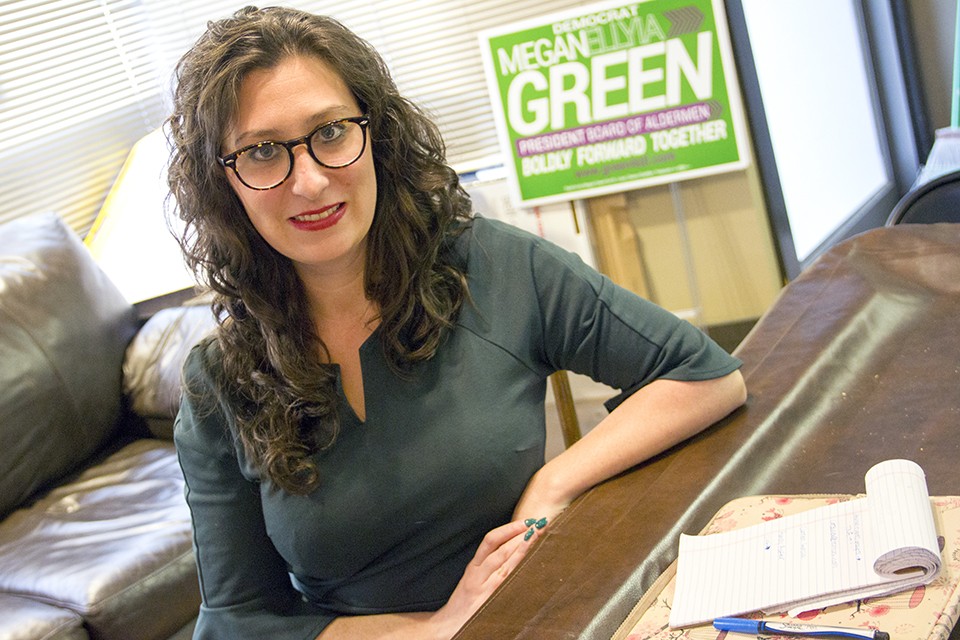 Megan Green joined the Board of Aldermen in 2014. All it took to get there was bucking the local Democratic committee, running as an independent and winning a special election as an underdog in a four-way race.

In Green's favor, though, was an endorsement from the board president. A former city public school teacher, Green had volunteered her support on Reed's unsuccessful mayoral run in 2013, and Reed had in turn backed her against the Democratic nominee. After Green won another election to hold her seat a year later, Reed was among the first to congratulate her, calling her a "hard worker," and "a great friend" to St. Louis Public Radio. Five years and several feuds later, Green is running to replace him.

The Green campaign headquarters is in what used to be a pub in Tower Grove South. Much of the "office space" is occupied by a full-sized pool table converted into a work surface for various notes and laptops. The landlord's conditions for renting the office, Green explains, included a stipulation that the table had to stay.

When Green first took office, she found St. Louis government cluttered by dubious traditions. She was outraged by the presence of lobbyists on the floor of the legislative chamber, as well as "aldermanic courtesy," which essentially allows members to dole out tax abatements inside their wards — just as long as the "courteous" lawmaker defers when colleagues seek to do the same.

While she's soft-spoken and measured in conversation, Green is not a politician of courtesy or half-measures. She's fond of the term "fundamental change" when describing her vision for St. Louis. In her time as alderwoman, Green has sponsored some of most ambitious legislation the city has seen in years. To the chamber's Old Guard, she's perceived as a maverick and a grandstander.

Outside City Hall, Green is suing the city for violating protesters' rights during the Stockley verdict demonstrations in 2017. (She alleges her group was tear-gassed in retaliation for protesting in the street.) Months before those protests, she smuggled journalists (including this reporter) posing as graduate students on a tour of the much-maligned medium-security prison known as the Workhouse.

Those stunts haven't made Green many friends at City Hall.

"Even knowing that these things have political repercussions for me, when the community asked, I came," Green says. "I think that's what most folks will say about me, that when I'm asked, I show up. Even when I'm not asked, I show up."

As an alderwoman, Green is the closest thing local politics has to a Bernie Sanders-style Democrat, someone who talks easily about "workers' rights" and isn't reticent to identify as a democratic socialist.

Her agenda, and her brand of progressivism, brought her into conflict with Reed. In 2015, the president refused to call a special session on a minimum-wage-increase bill that Green supported. The delay threatened to kill the proposal, which needed to pass before a Republican-supported bill in the state legislature could block the city's efforts.

Eventually, Reed did call the special session. (Even so, three months later, the state assembly successfully reversed the wage increase.)

Green says she came away from the experience frustrated by Reed's maneuvering. "It started to become very clear to me that this person that I thought was progressive on a lot of issues, perhaps wasn't," she says.

From that first "falling out," says Green, her friendship with Reed began to crumble. Over the last four years, the two have clashed repeatedly at Board of Aldermen hearings. The confrontations have reflected not just their contrasting philosophies of city governance but barely restrained mutual dislike.

In 2015, with the NFL's Rams poised to leave the city, the Board of Aldermen prepared to endorse a $150 million payment to help build the team a $1 billion new stadium. On Twitter, Green alleged the deal was rotten. "I've had loved ones offered bribes for my support," she wrote, claiming that fellow Alderman Sam Moore had also reported being approached with gifts in exchange for his stadium vote. She described the process as "legalized bribery."

Green's allegations were met with outrage from fellow board members, with Reed telling the St. Louis Post-Dispatch "she clearly has lied about this" and demanding she apologize and face consequences. And indeed, when a police investigation turned up no evidence of a criminal bribery scheme, Green did apologize — but only for her comments about Moore.

Asked about the incident now, Green says, "Maybe I didn't handle it in the best way that I could have," but she still stands by her claim that the board's process of funding stadiums is beset with at least the appearance of corruption. Green blames Reed for his role in that dynamic, pointing out his tendency to flip major votes in the wake of campaign donations, as he did in 2017 when his vote to fund Scottrade Center renovations went from yes to no, and then back to yes.

In 2016, the public sparring between the two took a turn for the offensive when Reed appeared on the AM radio show hosted by the self-proclaimed "Grim Reaper of St. Louis radio," Bob Romanik.

Romanik, who donated heavily to Reed's 2013 mayoral campaign, has earned a reputation locally as a racist shock-jock spewing the n-word. That day's show would become a benchmark for Romanik's brand of vitriol. And Green was the target.

On air, Romanik launched into a diatribe against the alderwoman, calling her an "alderbitch" and "a low-life, no-account good-for-nothing skanky bitch" who made the shock jock "ashamed to be white." As Romanik piled insults on Green — including the suggestion that her lies would cause her to be violated by Pinocchio's growing nose — Reed could be heard awkwardly laughing in the background.

Reed later apologized and claimed he'd tried to hush Romanik during the diatribe, but the incident turned the conflicts between Reed and Green into a public scandal wrapped in a jabbering display of misogyny.

Green still hasn't forgiven Reed. She bristles that Reed's apology minimized his inaction in the face of Romanik's ugly tirade. "I got an apology for his friend's behavior," she says, "not for his behavior."

The bribery controversy and the Romanik incident crumbled what was left of Reed and Green's relationship, she says. There wasn't much to say after Reed shared airtime with a man calling her an alderbitch. "I had pretty much given up on a relationship with the president," she says.

And now she's trying to take his job. But if observers expected that Green and Reed would use a debate at Harris-Stowe State University to air their hostilities, those expectations would be broken almost immediately.

The debate would feature plenty of bickering, name-calling and allegations of corruption and deceit. But this time it wasn't Green sparring with Reed.