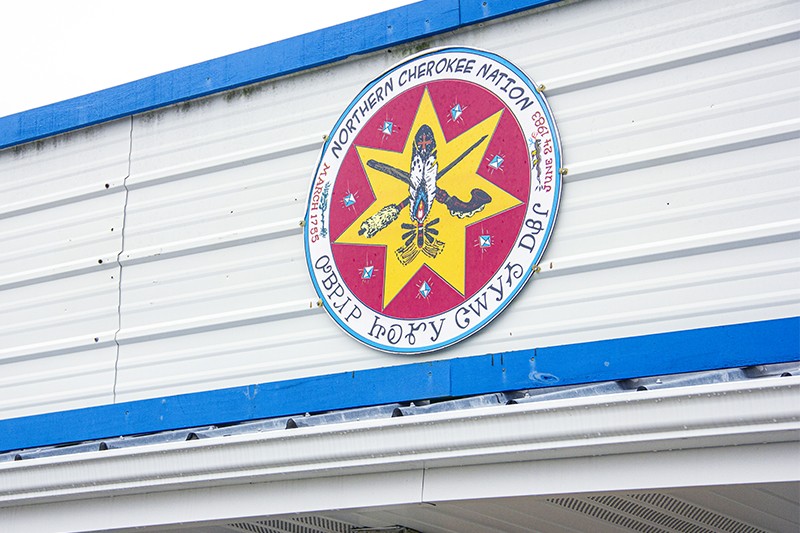 In 1982, the Northern Cherokee Nation of the Old Louisiana Territory registered as a nonprofit with the state of Missouri, marking the first documented appearance of the group that would one day fracture into several tribes, including the Descombes-led band of the Northern Cherokee.

The tribe is not recognized by the federal government, and it doesn't claim to be. However, its website claims a lot of other things, including that the tribe "has been state recognized in Missouri since the 1980's" — a pointedly misleading description that's been debunked by the Missouri attorney general.

The bottom banner of the website includes another official-sounding boast, notifying visitors that the tribe is "recognized by the Missouri work force diversity program for members wishing to become minority contractors."

That claim was accurate until 2011, when a change in the federal regulation muddied the water of minority business programs.

Before 2011, company owners seeking minority certification as Native American had only to "demonstrate that he or she has held himself or herself out, and is currently identified by others, as a member" of a Native American group.

After 2011, however, the amended regulation changed the requirement. Now, Native American minority contracts were to be awarded only to owners with citizenship in tribes recognized by the federal government.

What happened next was perhaps the most stunning part of the L.A. Times' investigation:

Nothing. Nothing happened. The L.A. Times discovered that companies whose owners were members of non-federally recognized tribes had stayed certified in the programs even after 2011 — even when the owners had all-white ancestries.

It was the same in Missouri and St. Louis. The L.A. Times story included Vicki Dunn, a citizen of the Northern Cherokee Nation whose Berkeley-based company had been awarded an $80,000 minority contract from the City of St. Louis. She had no answer for why census and death records identified her ancestors as white.

Days after the story published, a city spokesman said in an email to the Riverfront Times that officials had "initially relied on the State of Missouri's approval" of the disputed Cherokee tribe, despite Missouri having no official agency or process for recognizing Native American tribes. St. Louis had not acted on the 2011 regulation change, and the spokesman confirmed that the city's MBE program "did not reexamine the minority status of any of the firms after the initial certification."

The result was that companies with white owners continued to enjoy the benefits of their minority contracts. By the time officials corrected their oversight, the regulation that had sought to fix the problem was eight years old.

The scandal was far from just a Missouri problem. Every level of government, from municipal to federal, had failed to protect programs that had been created to repair the damage wrought against Native Americans in the nation's past and present. These governments had allowed white people to claim resources reserved for Native Americans and other minorities.

Of course, it's not the first time this has happened.

More than a century ago, between 1898 and 1907, the Dawes Commission received 250,000 applications from people seeking to record their citizenship as Native American — and obtain the allotment of land that came with it. The process became swarmed by white people claiming undocumented ancestry, but the commission didn't simply turn a blind eye. When it closed the enrollment process in 1907, it had rejected about six of ten applicants. The "Dawes Roll" includes just 100,000 names.

Today, the name of "a linear ancestor" on the Dawes Roll is required for citizenship in the Cherokee Nation of Oklahoma and other federally recognized tribes.

The subject of federal recognition and tribal identity can seem highly bureaucratic, and that's because it is; but it's important to recognize that this bureaucracy isn't a separate entity from the vast ethnic cleansing of Native Americans. It is tied to it. This explains why the Dawes Roll, a century-old registry of names, still exerts such influence today.

In the 1820s and continuing to the 1830s, thousands of Cherokees perished during a months-long forced relocation, called the Trail of Tears, to Indian Territory in what is now the state of Oklahoma. By the end of the century, the Cherokee were among the "Five Civilized Tribes" that governed themselves and maintained a national system of communally owned land.

Destroying those tribal governments was the aim of the Dawes Commission, which sought to convince the tribes to end their land ownership system. That the commission undertook a census to accurately compensate tribal citizens — with their own land — was itself a by-product of the larger theft underway.

And that's exactly what happened. The tribes' governments and land system were abolished. Their autonomy was violated once again, and the land later became Oklahoma. However, more than a century later, the Dawes Roll is a useful artifact of that violation.

This list of names, created in the context of theft and betrayal, now separates many recognized Native American groups from the countless self-identifying tribes across the country.

In contrast, the enrollment process of the Northern Cherokee Nation — which, based on the genealogical investigation of the L.A. Times, appears to have certified several members with white ancestry — is not reliant on the Dawes Roll for membership. Descombes rejects the document's legitimacy.

"The Dawes Roll is one of the most flawed documents in the world," he says, noting accurately, "It's main thing was to destroy the reservation, which is did."

As of late, the tribe's assertions have been dealt devastating blows.

But some tribal citizens are fighting the changes. On November 14, 2019, four St. Louis companies who had been caught in the decertifying sweep filed a federal civil rights lawsuit. They're charging St. Louis with discrimination.