Before the $300 million national scandal, the civil rights lawsuit and the accusations of fraud, the Northern Cherokee Nation meant something in St. Louis. It used to mean money.

Instead, it is March 14, and some 200 miles west of the city, just outside the rural town of Clinton, the blue roof of the Northern Cherokee Nation's headquarters appears on the horizon like a colorful aberration amid the green farmland. A sign proclaims the tribe's purported founding date: March, 1755.

Cars and trucks pull into the gravel parking lot at the tribal complex. Some of these tribal citizens have driven hundreds of miles to attend the council meeting. They arrive in regalia, dressed in ribbon shirts, feathers, beads and bone; their hair is braided, their wrists decorated with wampum.

Kenn "Grey Elk" Descombes, the tribe's chief, greets each arrival in a booming voice as they sign the guest book. His ribbon shirt is a rich and dense pattern of purple, and he wears multiple necklaces of bone and dangled ornaments.

Descombes is a large man with a large presence. Surrounded by his citizens, the chief conjures a seemingly endless stream of tribal stories, tangents and legends about his people's travails in Missouri.

As the small crowd mingles, Descombes leads me toward a back office that's almost as large as the main meeting hall. We come to a wall lined with file cabinets.

Inside each drawer, he says, are "hundreds of pounds" of documents, themselves only a portion of the "thousands of pounds" of secret genealogical records scattered across vaults. He says files prove — despite denouncements from federally recognized Cherokee tribes and genealogy experts — that the citizens of Northern Cherokee Nation descend from groups which had once covered what is now the southeastern states, the same bands that were forcibly removed from their land, marched through the Trail of Tears and resettled in Oklahoma.

Only, according to the Northern Cherokee Nation, not all the Cherokee went to Oklahoma. These "lost" Cherokee chose to stay in Missouri, where they hid from government census-takers and refused to sign the registries created by later commissions.

As Descombes narrates, a tribal member comes into the office to tell him that the council meeting is nearly ready to start. She clips a long feather to the braid of graying hair that hangs to the center of his back.

"Now, your civilized people, they don't believe in this kind of thing anymore," he says. "They assimilate. They want to be quiet."

Despite the circumstances, there are some aspects of civilization that Descombes and the Northern Cherokee have embraced. He acknowledges as much with a laugh.

"We're going to have a modern government thing going on here," he says as we exit the office. "Now, let's go play white." 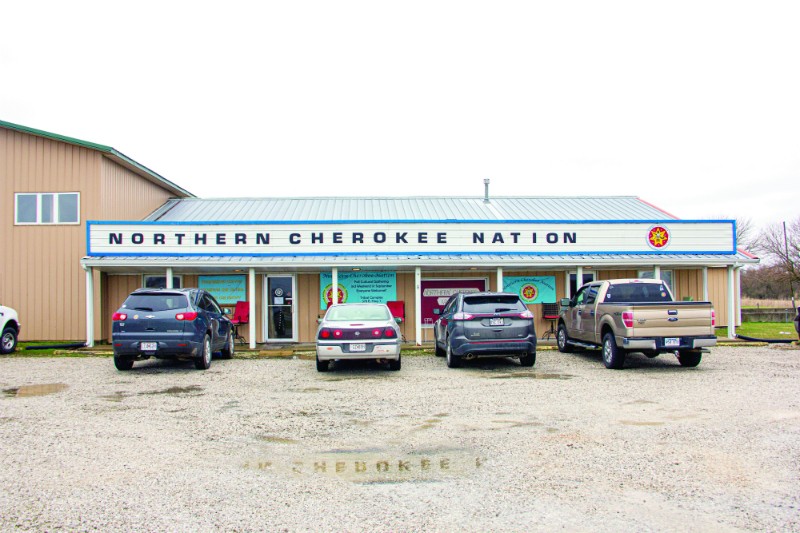 What are the circumstances of the Northern Cherokee Nation?

To hear Descombes explain it, the tribe has maintained "an unbroken line of chiefs" since the 1820s. He claims his own ancestry derives from Chickamauga Cherokee, a warrior clan which settled in Missouri and Arkansas and sided with the British during the American Revolutionary War.

But in the world of government contracts, the Northern Cherokee's history isn't nearly as important as its potential dollar value — one not derived from Northern Cherokee's assets, or tradition, or historical authenticity, but from the access it supplies to companies seeking certification for lucrative "set aside" contracts reserved for minority-owned companies.

The potential earnings are enormous. Like a vault key, a Native American certification opens the door to local and state contracts. On the federal level, 5 percent of the government's multibillion-dollar contractor budget is reserved for businesses owned by eligible minorities.

For years, that category included tribes such as the Northern Cherokee. Millions of dollars flowed to companies whose owners had merely supplied their tribal ID cards and claimed they'd encountered discrimination because of their minority status.

The web of money stretched coast to coast. In its unraveling, the first tug came from a pair of investigative reporters from the Los Angeles Times chasing a possible political scandal: In late 2018, they reported that William Wages, the brother-in-law of then-House Majority Leader Kevin McCarthy, had received more than $7 million in no-bid federal contracts for his California-based construction company — contracts he'd been awarded because the U.S. Small Business Administration certified his company as a minority-owned enterprise, or MBE, through his citizenship in the Northern Cherokee Nation.

But Wages is white. As reporters Paul Pringle and Adam Elmahrek detailed, "[an] examination of census, birth, death, marriage and other available public records show Wages' ancestors were identified as white. He is listed as white on his birth certificate."

The reporters went further, even hiring a Cherokee genealogist from the Cherokee Nation of Oklahoma, the largest of the three federally recognized Cherokee tribes. Going back to the early 1800s, Wages' ancestors didn't show up on any membership rolls for the recognized Cherokee bands. All evidence showed his ancestry as white.

This first case — involving a company that had made millions on minority contracts, certification through a non-federally recognized tribe, and an owner whose ancestry lacked any documented Cherokee ancestors — led the reporters to chase the story across the country.

It led them to Missouri, where three self-professed Cherokee tribes — including the Northern Cherokee Nation — had accounted for more than $300 million in minority contracts awarded by the federal government and seventeen states.

The door had been opened in Missouri as well. Four companies were located in the greater St. Louis area, the fifth in Union. All had been certified as minority-owned in St. Louis through their memberships in the Northern Cherokee Nation.

There was Premier Demolition, owned by Bill Buell. He had been awarded a $311,000 contract in 2017 for clearing space for the National Geospatial-Intelligence Agency in north city. Replaying the tactic from their first story, the L.A. Times investigative team hired a genealogist through the Cherokee Nation of Oklahoma to look at Buell: The search showed his ancestors identified as white in census records.

Thanks to the inquiries from the L.A. Times, St. Louis officials saw the scandal coming. On June 6, 2019, the city board that regulates certifications for minority-owned businesses voted unanimously to decertify the five companies certified through the Northern Cherokee. They were CCI Environmental Inc., Global Environmental Inc., Premier Demolition Inc., D.W. Mertzke Excavating & Trucking, Inc. and Union-based Taylor Electrical Service.

Three weeks later, the L.A. Times dropped its bombshell report online. The story's headline, "Claiming to be Cherokee, contractors with white ancestry got $300 million," alleged widespread fraud and government incompetence. The story described an abandoned regulation and a system hijacked by minority contractors with white ancestry. The result was "a major failure in the nation's efforts to help disadvantaged Americans."

The lead photo of the story showed a man in a ribbon shirt, his neck draped with feathers and beads, and the blue and red crescent of the Northern Cherokee Nation in the background.

That was how Chief Kenn "Grey Elk" Descombes became the face of a fake tribe scandal. 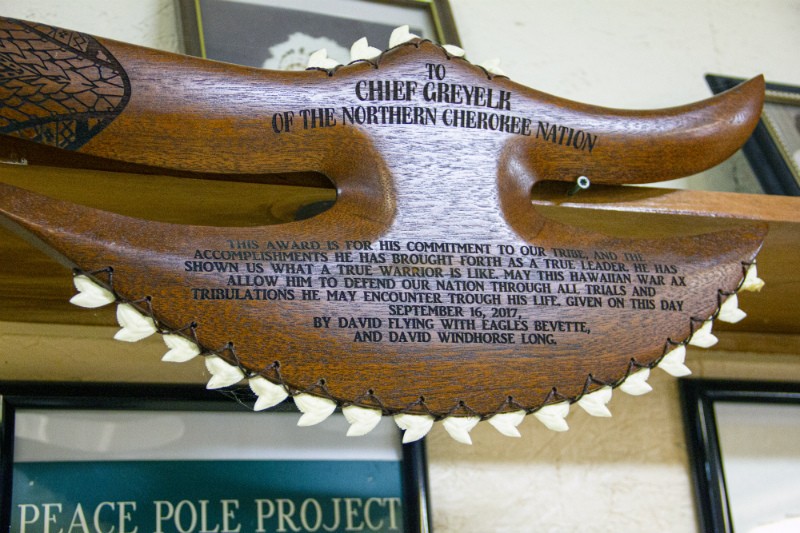 While the L.A. Times had unraveled a nationwide failure in government oversight, what remained unexplored was a seemingly straightforward question: What did it actually mean to be part of the Northern Cherokee Nation?

Whether its citizens are sincere believers or accomplices to an elaborate fraud, the fact that the answers are tied up in a web of money and alleged tribal identity theft demanded further inquiry.

In a January 2020 phone call, the 68-year-old Descombes — a long-haul trucker by trade — dispenses scorn on the L.A. Times and dismisses the seriousness of the recent news coverage, which he calls "less than a little flattering."

Despite the chief's recent impression of "disparaging" reporters, he invites me to attend the next tribal council meeting.

And there I am, a couple months later, as Descombes and the six other members of the tribal council assemble before a crowd of seventeen citizens. (Less than a week has passed since Missouri confirmed its first coronavirus case, and I'm told that much of the usual crowd has stayed home amid the burgeoning pandemic.)

Just as Descombes suggested in the back office, the council meeting is a "modern government" sort of operation. It begins with the chief explaining the procedures of swearing in a new council speaker. Motions are made and seconded. Minutes are read.

Then, the attendees are asked to stand and remove their hats.

Descombes is a self-professed expert in the Cherokee language. (During the earlier tour in the office, he described growing up in a Cherokee-speaking home and said he's spent 40 years translating traditional tribal prayers and rituals. As proof he produced a thick binder, stuffed with pages, which he identified as "the world's biggest Cherokee dictionary.")

Descombes addresses the citizenry. "I've translated a prayer here into English," he says. Unfolding a sheet of paper, he begins to read: "My grandfather is a fire, the earth is my mother, the great spirit is my father."

"The world stopped at my birth and lay itself at my feet."

"I shall swallow the earth whole when I die."

The prayer continues, moving through various objects of reverence. It hails the earth and fire, earth and wind, parents and grandparents, and finally the great spirit:

"Oh, great spirit, giver of my life," Descombes intones, "please accept this humble offering of prayer, this offering of praise, this honest reverence of my love for you."

The prayer concludes, and the meeting turns back to the tasks of modern government: There's an update about the remaining payments left on the tribal complex, details of an upcoming visit by a Boy Scout troop and plans for the annual powwow scheduled for October, the centerpiece of the tribe's calendar. There's a call for donations to buy a Missouri state flag and solar lights. Mostly, it feels like a small-town city council meeting.

Weeks later, I type the words "My grandfather is a fire, the earth is my mother" into Google, and hit enter. I find the entire prayer, verbatim, in Facebook and Pinterest posts, as well as the first chapter of a 2014 romance novel titled Apache Moon available for purchase on Amazon. The same text appears on spirituality websites under the title "An Indian Prayer" as far back as 2001.