By reputation, the Proud Boys are fighters.

This past August, the far-right group gathered on the streets of Portland with its fellow travelers for a rally all but guaranteed to start a brawl. On one side were young men in MAGA hats wearing distinctive black polo shirts with yellow piping on the collars and sleeves. On the other, an assortment of avowed anti-fascist groups commonly lumped together as Antifa. The two sides circled, cat-called and then, inevitably, tried to knock the crap out of each other.

Sticks, shields, bricks, bottles and mace were deployed, as small groups and individual brawlers clashed amid the sound of police flash bangs and homemade mortars. Both sides came prepared with helmets and homemade body armor.

For the Proud Boys, fights like these are good for their image — a powerful advertisement to their ideal recruits. On the flip side of that empowerment is bitterness. The group thrives on painting itself as a victim of left-wing persecution.

The Proud Boys organization is less than two years old, and has spent its entire existence fending off accusations that its members are part of a violent gang of white supremacists. In 2017, the Southern Poverty Law Center classified it as a "general hate group," a title the Proud Boys fiercely contest.

What is undeniable, though, is that some members of the Proud Boys have appeared uncomfortably close, figuratively and literally, to modern-day Nazis and white supremacists. Jason Kessler, a Proud Boy who was since excommunicated, organized the infamous 2017 Unite the Right rally in Charlottesville. Other Proud Boys attended.

While the most active Proud Boy chapters operate on the coasts, smaller ones have opened in cities across the country, including two in Missouri: in Kansas City and St. Louis. One estimate places total membership across the U.S. at 6,000. Numbers are growing. But the attention has its costs.

This has been a generally terrible summer for the St. Louis Proud Boys. They've been hounded by local Antifa groups. On lampposts, signs appeared blaring the members' names and photos beneath a warning: FASCIST ALERT. A placard in a storefront window proclaimed "Proud Boys Not Welcome." And while in Portland the Proud Boys met street fighters, in St. Louis they were confronted with something much trickier: a social media onslaught directed at both them and any venue unfortunate enough to host them. They've been run out of two bars — and had their private Facebook groups infiltrated.

In July, Riverfront Times received an email from a Milwaukee, Wisconsin-based "anti-fash collective" calling itself Right Wing Leaks. Posing as a recruit via a fabricated Facebook account, the collective managed to pass the Proud Boy vetting process and gain access to a closed Facebook group for Missouri Proud Boys. Right Wing Leaks then captured screenshots of members' Facebook profiles and about two dozen videos of the St. Louis chapter's initiation rites.

In one video, the president of the St. Louis chapter, a white guy with windblown black hair and aviator sunglasses, records himself taking the Proud Boy pledge.

"My name is Mike Lasater," he says in the video. "I'm a Western chauvinist, and I refuse to apologize for creating the modern world."

Lasater flashes an "OK" gesture, his index-finger and thumb joined to make an O along with three raised fingers.

He finishes the pledge. "The West is the best," he says. 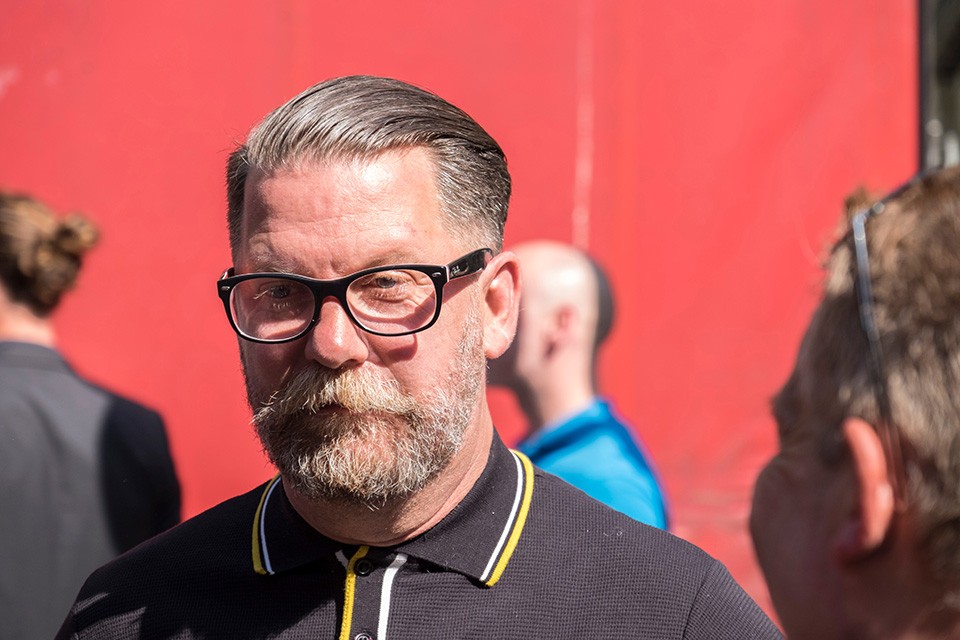 On the first Friday in August, Mike Lasater and two other Proud Boys settle on stools in a south-city bar. They're drinking the group's preferred beverage combination: Budweiser and straight shots of Maker's Mark.

The bar, Tuckers, is a rarity for St. Louis. Not to be confused with Tucker's Place, the well-loved trio of local steakhouses, this Tuckers is located so far south in the Patch neighborhood, it's practically St. Louis County. It has a dive bar's classic grungy charm — at 8:30 on this Friday night, karaoke night, the regulars are already blasted and teetering on their feet. But not many establishments in this deep-blue city hang a sign above their front door stating, in giant red letters, "TRUMP." Below that, the sign, a veritable jumble of messages, shouts "St. Louis needs jobs and I need customers!!!" and "Support Your Police."

Tuckers is the closest thing to a safe space that the Proud Boys have in St. Louis.

On the TV above the bar, the Cardinals are playing the Pirates. The Pittsburgh players' black-and-yellow jerseys bear an uncanny resemblance to the tightly fit, black-and-yellow Fred Perry polo shirts worn by the three Proud Boys huddled at the bar's least crowded end.

These three identically-clad young men, all in their late twenties, are talking about Portland.

"It actually proved one thing, and it's that Antifa are the aggressors," says Luke Rohlfing, a St. Louis native who travels the U.S. while writing for the right-wing news site Big League Politics. Rohlfing spent his morning tracking livestreams and Twitter feeds of the August 3 Portland action, which he then used to opine about how the leftists were to blame for the confrontation.

Next to Rohlfing, Lasater tips his beer in agreement. The Proud Boy chapter president wears two matching gold-leaf collar pins on his polo. His belt buckle spells out "candy," and a gold medallion rests in a thicket of exposed chest hair. By Proud Boy standards, he's as flamboyantly proud as they come.

"Left to our devices, we're not a violent organization," he says.

In conversation, Lasater tends to downplay the role of violence in the group's DNA, focusing instead on similarities to traditional fraternal organizations, men's clubs, the Freemasons and Knights of Columbus.

"We're a drinking club," he says, gesturing at the bar around him. "I mean, as the St. Louis Proud Boys, what have we done since we started? We've gone out for beers, and we've made friends."

Perhaps. But they've made enemies, too. Lasater founded the local chapter in spring, not long after (as he tells it) a business partner at the bar he co-owned, the Livery Company, decided to out him on Facebook as a Trump voter. The partnership broke down from there, and he says he was forced to abandon his role.

The bar's co-owner, Emily Ebeling, says Lasater's departure had nothing to do with his political views, but admits that she was the one who publicized his vote for Trump.

"I did call him out for voting for Trump," she says. "I considered him a friend, a close friend, and he had lots of friends who Trump wouldn't protect. As a woman and a gay woman, I felt betrayed that he could vote for what Trump stands for."