In the Galleries - Matthew Strauss, Unbearable 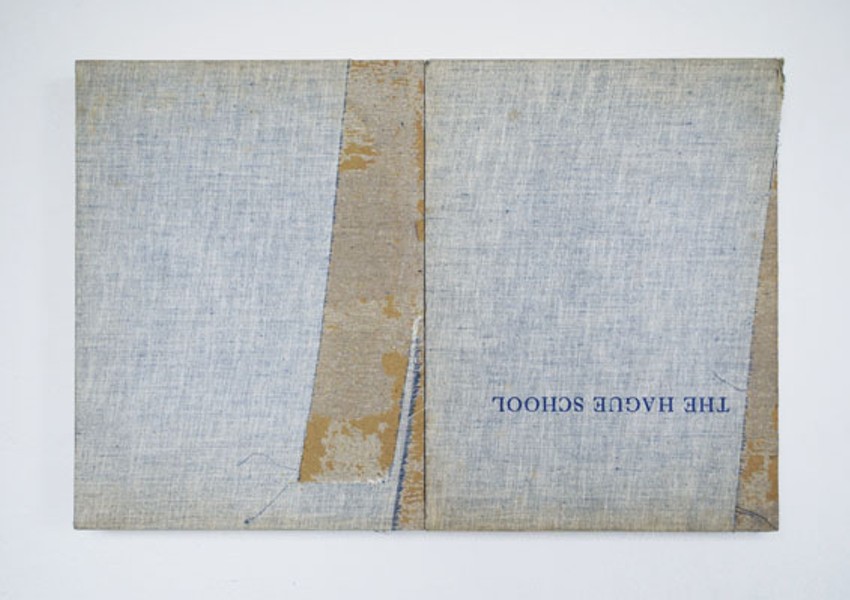 In the Galleries - Matthew Strauss, Unbearable

This selection of elegant esoterica by St. Louis-based artist and White Flag Projects director Matthew Strauss will be the final exhibition at PSTL, which recently announced that it would be closing its gallery doors (though not those of the adjoining frame shop). Strauss' works vacillate between two symbolic extremes: art about art and art about the self. Sometimes the two are one in the same. Vinyl serif letters on the gallery's exterior window rebrand the space "PAULA COOPER" (after the legendary New York art gallery). Inside, a narrow entryway scrupulously frames the objects immediately viewable within: a raw oak beam with an outsize oval frame affixed and oriented away from the viewer, beyond which hangs a wide green stripe painted on unstretched and otherwise white canvas. Only three other objects inhabit the gallery: the pale-blue canvas binding of a book titled The Hague School, mounted upside-down on wood and hung like a painting; and a pair of framed portions of textual errata cut out of a vintage catalog of work by sculptor Alberto Giacometti. The sparse arrangement conveys a sense of portentous meaning while keeping its trap firmly shut. Close inspection of the oval-framed piece's flipside reveals that whatever it once contained has been removed. And this may be the exhibit's key: It's not easy to take a good hard look at oneself, but the surfaces, abstractions and framing devices of art can make it all appear a little less unbearable. Through July 27 at PSTL Gallery at Pace Framing, 3842 Washington Boulevard; 314-531-4304 or www.paceframing.com. Hours: 10:30 a.m.-5 p.m. Tue.-Sat.