In the Delmar Loop, Prime 55 Is Full of Surprises

Prime 55 has a warm, sexy vibe. The upscale steak and seafood spot, lit by candlelight, is the sort of place where it feels entirely appropriate to order champagne by the bottle — just because.

Yet as I sat in the dining room on a recent Friday night, a large bowl of Cajun kale soup sitting before me, I may as well have been cozied up in my grandmother's kitchen. Steam, rising up from the dish, delivered a savory perfume that was at once utterly intoxicating but as comforting as an electric blanket. Breathing it in, and glancing down at the vibrant, red-orange tomato broth brimming with white beans and kale, I was sure of its greatness before even taking a bite. Once I dug in, however, I wasn't just convinced; I was hooked. The warmly spiced broth was a master class in texture, hitting the lips with a delicate mouthfeel, then taking on a magical, viscous quality as it lingered on the palate. It's the sort of richness you get from bone broth, but the chef was able to coax this deeply umami flavor and texture from tomatoes and layers of seasoning. It's a breathtaking dish that envelopes you in pure comfort.

A soup this good would be a pleasant surprise even at a daytime cafe. From Prime 55 — a restaurant that bills itself as a sexy, sophisticated evening destination — it's wholly unexpected, especially from two entertainment industry veterans who have never owned a restaurant. Owners Tony Davis and Orlando Watson have made their careers about as far from the stockpot as it gets. Watson, an entertainment mogul and founder of Rockhouse Entertainment, has worked with artists like Akon and Kelly Rowland and counts Interscope and Warner Brothers records as past collaborators. Davis has also had a successful career in the music industry, including his high-profile gig as Nelly's manager.

The childhood friends' paths in the music business would regularly cross, but they never actually worked together. This would change when they were approached by a chef friend of theirs who wanted their help in opening a restaurant. At first, they declined, but as they got to talking, they realized that they liked the idea of collaborating and felt that a restaurant would be a natural progression from their experience in the music business.

After researching the St. Louis dining scene, Davis and Watson came up with the idea for Prime 55 as a way to fill a void that they saw in the community, namely, the lack of upscale, black-owned restaurants that cater to an evening crowd. Though they'd been impressed with several of the black-owned food businesses in St. Louis, they couldn't help but feel that there were few options in the fine-dining genre. Most, they noted, tended to be daytime, soul food or barbecue spots — excellent in their own right, but not the sort of place you could go to for a glass of wine and a fancy date-night experience. 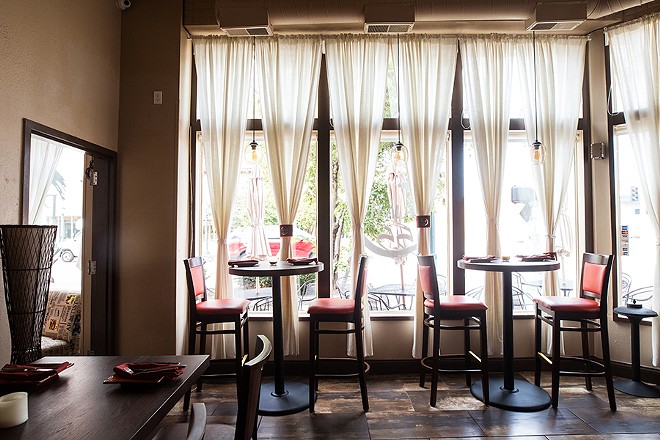 The pair knew they had the know-how to create that sort of atmosphere; their first step was finding the space. After searching around town, they settled on a corner storefront on the eastern edge of the Delmar Loop that has seen more than its fair share of restaurants over the years. Most recently, the space was the former Rebel @ VStyle; before that it was VietNam Style, Cabana on the Loop, Modai Sushi Lounge and H2 Horseshoe House. The wake of failed businesses at the address did not deter Davis and Watson. Instead, they dug in, determined to finally turn the place into the concept it was meant to be.

They spared no expense to achieve their vision. The transformation from a cavernous, neon green dining room into a warm, sophisticated space is stunning. The room has been painted cream, save for one orange-red accent wall that matches the leather on the barstools and napkins. It gives a bright yet warm pop of color in an otherwise earth-tone space. Reclaimed wooden panels soften the vibe, as do the warm glow of the light fixtures and candles scattered throughout the room (the restaurant also has a downstairs dining room and bar, which matches this aesthetic, but is even sexier given its more intimate, almost speakeasy feel).

To lead the kitchen, Davis and Watson brought on chef Tyler Wayne after their original chef friend had to back out of the business due to health reasons. Wayne, who was formerly the executive sous chef at Ruth's Chris Steak House in Clayton, was tasked with executing their vision and creating dishes of his own. 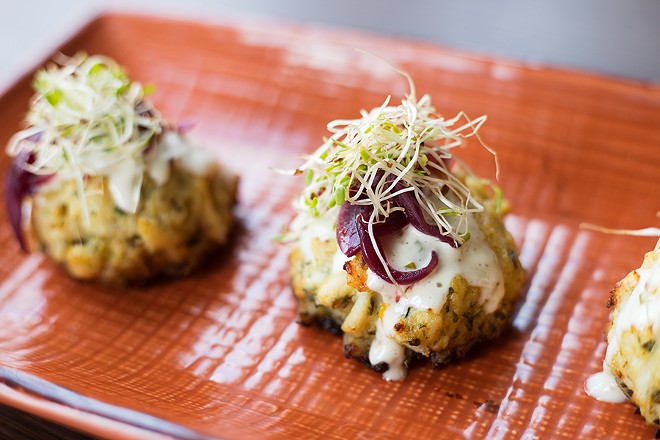 Wayne's time at the high-end, Cajun-inflected steakhouse is evident on Prime 55's menu; like the outstanding kale soup, many of the restaurant's dishes have a Louisiana influence, like the Cajun Grilled Street Corn, a wonderful riff on the Mexican street food. Wayne's version features a whole cob, pan-fried so that it caramelizes to a golden brown on the outside, giving it a wonderful nutty flavor. He lightly coats it in a mildly spiced chipotle aioli that is accented with lime juice to cut through the richness before finishing it with cotija cheese and cilantro. It's rich but restrained, a testament to his skill.

The lobster fries are also well executed. Here, Wayne takes crispy shoestring fries and smothers them in a velvety lobster cheese sauce. And though I was prepared for only minimal morsels of the shellfish, I was surprised to find large pieces throughout the dish. It was a preview of the shockingly generous amount of crab Wayne uses in his crab cakes. Three mandarin orange-sized discs are little more than composites of crabmeat. There is surprisingly little breading, some flecks of onion and fresh parsley, a tiny drizzle of lemony aioli and pickled red onions to break up the richness. Otherwise, it is pure crab — massive pieces of it. I'd quibble that they could have been cooked a touch longer, but finding something so close to Maryland-style cakes here in St. Louis makes this a minor point. 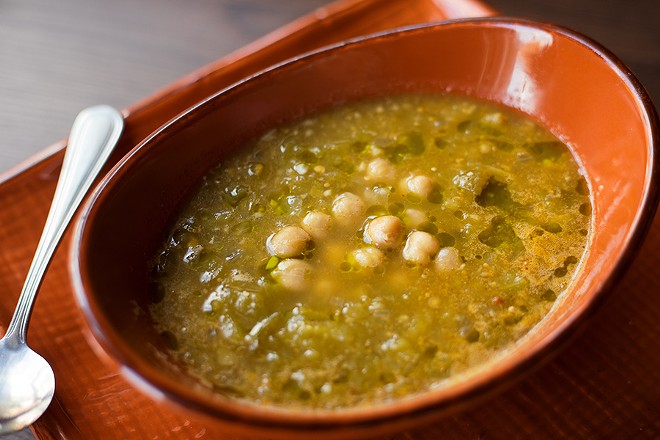 Prime 55's green chili is another unexpected delight in how much it evokes the wonderful New Mexican green chile soups rarely done right outside of the Southwest. More a chile soup than a beef and bean Texas-style chili, Wayne's dish is a brothy blend of rustic-chopped poblano and Anaheim chiles and tomatillos that is both fiery and piquant. I found myself sweating but unable to stop eating it.

Prime 55 may not be a full-fledged steakhouse, but it takes its cues from that genre. The Steak 55 is a simply grilled twelve-ounce strip, delivered to the table at an impeccable, juicy medium rare, even though it had been sliced into strips and fanned out on the plate for presentation (any steak cook knows what a bold move this is; if not properly rested, the juices will spill out, leaving the meat dry). Potatoes, rustically mashed with the skin on, and chimichurri-dressed zucchini and yellow squash rounded out the plate.

The Surf & Turf featured a twelve-ounce ribeye and a cold-water lobster tail (you can also choose a strip steak or shrimp) lightly dusted with Cajun seasoning. The steak was beautifully marbled and  perfectly cooked, but the lobster tail was overdone. Though flavorful, it was on the dry side.

Wayne's cauliflower steak is a thoughtful dish that reveals a different flavor with every bite. The "steak" consists of a halved head of cauliflower, grilled so that it is tender and develops a light layer of char around the edges. Mushrooms, carrots, confit tomatoes and quinoa surround the cauliflower, and preserved Meyer lemon acts as a bright riff on hollandaise sauce. However, the most interesting part of the dish is what the menu describes as hummus, though it is more tahini-forward than most versions. The result is a silken, intensely nutty dipping sauce that makes this vegetarian offering feel robust and hearty. 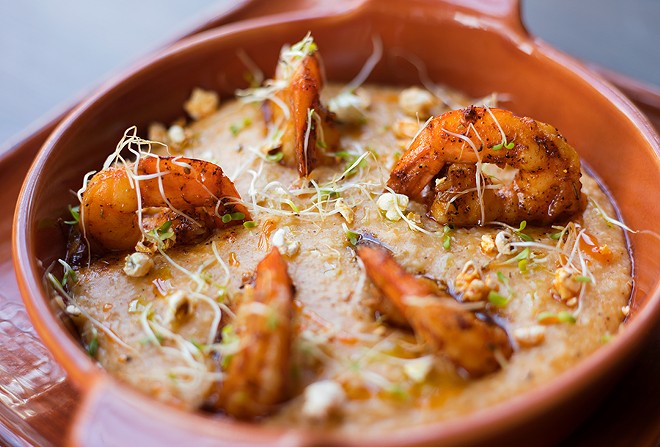 Prime 55's Cajun influence is most apparent in its shrimp and grits. The large, plump shellfish are lightly blackened and well cooked so that they remain tender. The grits themselves were not as creamy as I would have hoped; fortunately, the shrimp's buttery cooking jus acted as a sort of gravy, infusing them with flavor — I just wanted more of that delectable liquid.

Although Wayne proves his chops as a savory cook, his desserts give the impression of a pastry pro, especially the triple chocolate mousse cake. Here, layers of dark, milk and white chocolate are stacked atop one another, formed into a round disc and frozen so that they are the consistency of ice cream. Wayne then tops the cake with candy-like bruleed bananas — alone a wonderful garnish, but he doesn't stop there. The mousse is surrounded by peanut butter powder, an interesting fluff that gives the dessert a hint of nuttiness without being overwhelming. It's a delightful mix of texture, temperature and flavors.

That peanut butter powder was such an unexpected surprise on a dish that bills itself as a triple chocolate mousse cake. But, just as the comforting kale soup was an unanticipated delight at a restaurant that wants to be seen as a sophisticated evening destination, Prime 55 shows that it is full of surprises.