STEPHEN KENNEDY Sadhna Smantarai and Louie are among the dozens of visitors who use the park in Grand Center on any given day.

The addition of a sculpture park at the crossroads of SLU and Grand Center can be understood within the broader landscape of the area; after all, Grand Center has long been building (or at least branding) itself as the hub of artistic energy in St. Louis. That this particular real estate has been given over to the works of Brother Mel Meyer, on one of the busier intersections in St. Louis City, makes sense in that context.

Tucked away in other, less visible outposts of the city are smaller oases of dog culture, including a wooded corner of Soulard known as the Frenchtown Dog Park. Run by an association of the same name, Frenchtown is a membership dog park. While a few members travel some distance, a larger group live in the immediate neighborhood, walking their dogs along the cobblestone sidewalks of Soulard for some shaded respite.

On a recent Saturday morning, Kalyn Niehoff is chilling with her energetic two-year-old dog, Lou. In search of a good chase, Lou darts among the three other dogs in the park without much luck. This sends him scampering hither and yon in search of fun in the larger of two zones, fitting in that it's the designated home of larger dogs. Even with a hot summer morning developing, the tree canopy keeps the temps down a bit as nearby Interstate 55 offers the morning's soundtrack, a steady buzz of traffic passing a couple dozen yards down the hillside.

Niehoff is likely correct in guessing that no homeowner would want that traffic noise so close. But for a group of dog owners and their wards, it's perfect. Over time, the Frenchtown Association, a fees-based group, has added shelters, various bits of "dog playground" elements and other amenities like running water. Dogs run, conversations are held.

"Easier" is a term that doesn't always apply to the arrival of dog parks in urban areas. St. Louis isn't a unique entity among cities, but something our urban center does have is space. Pocket parks of this sort have popped up in different areas without needing to displace. Even so, gentrification is a term that gets bandied about with the arrival of any new park.

Even a cursory web search of "dog parks gentrification" leads to some similar themes being discussed in various American cities. A lot of those articles point back to a story on CityLab from August 11, 2017. The story, by CityLab staffer Laura Bliss, sketches out a variety of debate points in relation to dog parks nationally.

"Resistance to dog parks," it reads, in part, "takes on a different tenor when animals seem to displace humans in housing-crunched cities. New dog owners are disproportionately younger and whiter than the residents of the cities they move into, and that has real estate implications: For one third of Americans aged 18 to 36 who'd purchased a first home, finding better space for a dog was the primary motivator, according to a SunTrust Mortgage poll. When young, white, affluent dog owners snap up properties in historically lower-income neighborhoods of color — and start advocating for amenities like dog parks, which can bump up property values further — the optics are complicated."

In St. Louis, those optics are different, as parks have taken over empty lots or off-the-beaten-path locations. And the dog-walker community here is so much smaller; unliked other cities, there typically aren't pros walking a Medusa-like batch of eight leashed animals into dog parks. The ratio feels closer to one-to-one. If there's a dark cloud of development needs in St. Louis, the sliver of a silver lining is the ability to use spaces for new and alternative uses.

There is a generational component that seems to run along with the conversation as well. At Frenchtown, the dogs vary in age, but their owners seem locked in a fixed age range of 25 to 35. Again, these are optics, but it's a younger crowd there. The park's litter bins are filled to the brim with spent cans of Natty Light and leftover packets, signs of price-conscious good times.

"Market research shows dog ownership has skyrocketed some 29 percent nationwide in the past decade," the CityLab piece continues, "an increase propelled largely by higher-income millennials. As young adult professionals increasingly put off having families, dogs have become 'starter children,' as Joshua Stephens wrote in The Atlantic in 2015. With demand growing, cities and developers are building more dog-friendly zones both in response to and in anticipation of more four-legged residents. Off-leash dog parks are growing faster than any other type of park in America's largest cities, with 2,200 counted as of 2010."

On this morning, even a non-dog walker can understand the appeal. As a breeze gently blows through the heavily canopied Frenchtown, a few dogs scamper, a few people share a casual greeting.

One member of the big dogs play group bounds straight up a tree for a longer-than-expected run in pursuit of a squirrel. "That was cool," Niehoff says. "I've never seen that happen." And she's spent a good deal of time here. "The doggy pool and shade allow people to hang out longer. I have friends in the area, and we'll meet here at the dog park, catch up, and the dogs get to play." 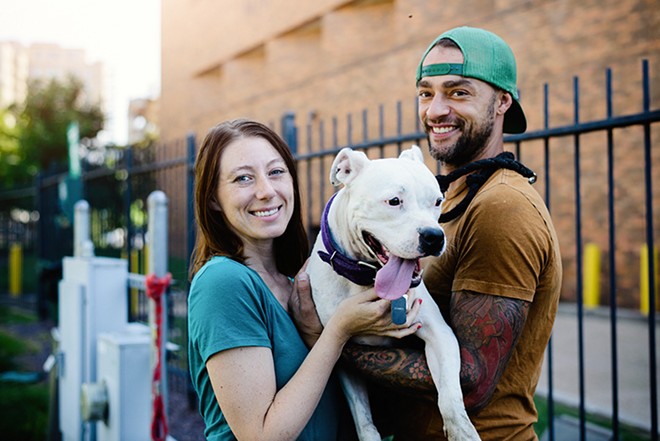 Frenchtown's presence in Soulard makes sense. If there was ever a zone of town that represented that blend of dog/person/hangout culture, it's Soulard. Spots like the old version of Molly's (itself named after a dog) and the Shanti were ahead of any trends in allowing four-legged visitors. That the Doghaus Soulard is found in this neighborhood — well, it more than makes sense.

Stephen Walters is part of a four-person ownership group at Doghaus, which took on the former location of Trop's and, before then, Gladstone's. They opened at Mardi Gras this spring, an experience that Walters says, with only a pained laugh, allowed them to work out some operational kinks under extreme conditions. Since then: smoother sailing.

He says that "we're a regular old bar that allows animals. If you want to use the dog park, there's a day pass and you sign an electronic waiver. There's a fee of $10 a day, and that's good all day, since a lot of people in Soulard bounced around. The other option is a membership, and you just need hard copies of your shot records. You get a tag for the dog's collar, and that's good for a calendar year and allows you to come and go as you please."

Walters says that "even though we started out as a neighborhood bar, we've got dog park members from Earth City, Fenton. Alton, Carbondale. That's been crazy, nuts. A lot of people are regulars and members, and it's become a great place for members to socialize. The social aspect behind it's been awesome and not just for the animals. I've had a couple people tell me that 'things are getting pretty serious with this girl, or this guy, and we met here.' That's cool. We wanna provide a place for people to do their thing."

And sometimes they connect more deeply, "even though we're not a dating service."

On a recent weekend afternoon, a brick building just to the south of the Doghaus' two fenced-in play yards allows for a little bit of shade. So that's just where Dayna Drennan and Dana Abell huddle as their combined three dogs play with a handful of others on a burner of a Saturday.

Part of SLU's Dog Pack, the Da(y)nas enjoy the Doghaus for exactly what it provides its members. As Drennan says, "It functions as a bar and a restaurant. That's kinda nice, because there might be a night when you wanna talk to a friend or significant other and you haven't given your dog the attention it needs. It's nice to do both."

And there's at least some code of conduct at play here. As dogs zip across astroturf and flop in and out of a wading pool, Drennan notes that "SLU can be a little less responsible than a place like this. There's accountability here. If your dog's a real dick, you can't come back. And I've stepped in a lotta poop at SLU over the years."