Crouching over a cardboard box, Geoffrey Soyiantet peels back the strip of transparent tape that seals its top.

Soyiantet pops open the box, then stares at its contents. He smiles warmly, as if he had just opened a carton full of newly discovered treasure.

In a sense, he has. The box contains hundreds of white corn seeds, a staple of countless farms and gardens in Soyiantet's native Kenya.

"Look at this," he says as he scoops up a handful of seeds and shows them off to a visitor.

A few months ago, Soyiantet and fellow members of Vitendo4Africa, a social and economic support group for African immigrants in the St. Louis region, had envisioned planting the white corn, along with tomatoes, onions and other crops, in the eleven-acre plot of land behind Christ Covenant Church in Florissant.

But now on this warm and breezy day in April, with a cottony filament of clouds drifting lazily across a deep blue sky — a perfect day for working in a garden — the field remains unplowed. The only things growing in it are grass and weeds, yellow-tipped flowers, tiny sapling trees, the wispy remnants of last year's onion crop.

The COVID-19 pandemic has kept Vitendo4Africa members from working in their Shamba ya Kijiji (Swahili for "community garden"), because of the area's lockdown orders and fears of spreading the virus.

The fact that such a beautiful day in the garden is being wasted rankles Pastor Paul Macharia, the church leader, who stands a few feet away, gazing wistfully at the field.

"It is a punishment," Macharia says.

The garden, which was started last year in collaboration with the Saint Louis Zoo, was a source of fresh, organic food. But it also became a popular cultural touchstone for the St. Louis region's thriving African immigrant community, as well as a nexus for the homesick and a refuge from the stress and conflicts of an American culture so different from the one in which they had grown up.

"Coronavirus is keeping everybody away from the garden," says Soyiantet, Vitendo4Africa's founder and executive director. "We use it as a social way to connect and get together. For the older people, they use it as a therapeutic way to stay connected."

Because of the lockdown orders and steep jobs losses resulting from it, everyone is worried, especially the children, he says.

"They are really stressed out and worried about their friends," Soyiantet says. "They can't go to McDonald's ... or [go] for a bike [ride together]."

The stress of so many hours inside for young people is exacerbated by what they see on TV and social media, says Pastor Macharia, a native Kenyan who moved to the United States in the early 1990s to study at Maryville University, and who today leads St. Louis' rapidly growing African immigrant community.

"They see the news," Macharia says. "So many people dying and being buried. Especially in New York, or Washington State, or Italy. ... One thing they don't understand is why it happened all of a sudden. It was OK, but now all of a sudden people are locked in their homes. Where was this before?"

The current pandemic, coupled with an unprecedentedly ferocious economic downturn, poses big challenges for everyone.

But those problems are the latest in a litany of challenges the members of Vitendo4Africa have already been dealing with: from understanding American English, to finding jobs and credit and a place to stay, to dealing with cultural conflicts between immigrant parents and children who wish to adapt rapidly to the American way of life.

And then, of course, there is the anxiety of life under a president who uses his position in the White House as a megaphone to broadcast a constant stream of anti-immigrant policies and invective.

On top of all that, Vitendo4Africa members now worry about the fate of their collaboration with the Saint Louis Zoo on its North Campus project, a 425-acre site in Spanish Lake, near the confluence of the Missouri and Mississippi rivers.

The Saint Louis Zoo Association used private donations to buy the North Campus site from the United Association of Plumbers & Pipefitters Local 562. In November 2018, St. Louis County voters passed Proposition Z to help fund repairs to the zoo in Forest Park and to operate the North Campus. While a construction date hasn't been set, the zoo hopes to open the park over the next five years, according to the zoo website.

Once completed, the ambitious project would allow visitors to replicate an African safari where tourists in Jeeps could be surrounded by a group of curious giraffes. A conservation and animal science center planned for the site would help the zoo manage endangered animal populations. 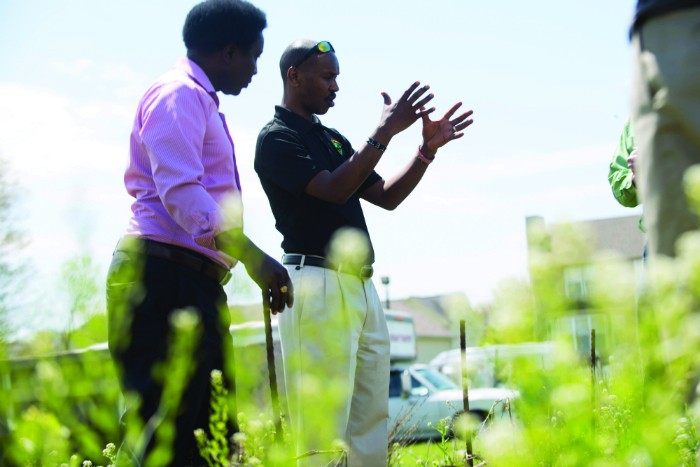 But of course those plans were sketched before the worst pandemic and financial crisis in a century hit the St. Louis area — a vicious one-two wallop that's raising big questions about the project's timetable among Vitendo4Africa members.

It's hard to overstate how important the North Campus project is to Vitendo4Africa members, who have been helping with design and execution as well as outreach to the communities surrounding it.

The project stands as a symbol of their future while also serving as a powerful tether to their past, according to Macharia.

Billy Brennan, a zoo spokesman, says zoo officials are still finalizing plans for the site, and that they expect to finish construction sometime within the next five to six years.

But Brennan acknowledges the COVID-19 pandemic and accompanying economic downturn could pose obstacles to that timetable.

"The safe answer is I think it could very well set us back a bit, but we don't know," he says. "We're still dedicated to getting the North Campus rockin' and rollin' as soon as possible."

For his part, Soyiantet remains hopeful about the project, as well as the future in general.

"We can always reference what's happened in the past," he says. "And that gives us hope that we can come out of difficult times. Difficult challenges in the past, even this one, we'll be able to get out of and overcome it."