In Colossal, Anne Hathaway Gives a Towering Performance in a Human Role

(c) ​VOLTAGE PICTURES, BRIGHTLIGHT PICTURES Oscar (Jason Sudeikis) and Gloria (Anne Hathaway) may or may not be subconsciously destroying a foreign country through their emotional hang-ups.

Gloria (Anne Hathaway) is a typical modern girl with typical modern problems. She's been out of work for a year, her prissy British boyfriend is dumping her and, as she tends to enjoy the occasional drink or seven, she frequently starts her day with no recollection of what she did the night before. Her life unwinding, she decides to return to her family home in Maine, now vacant. That's where she reconnects with Oscar (Jason Sudeikis), a childhood friend who currently runs a bar. She's hardly even had time to inflate her new air mattress when news appears on CNN of a giant monster smashing its way through South Korea.

These events are not unrelated in Colossal, a dark and clever comedy/horror movie/psychological drama about relationships, personal responsibility and the eternal struggle between the rubber-suited monsters of Asian cinema, called kaiju, and giant robots.

Gloria eventually figures out that there's a connection between the creature terrorizing Seoul and her own behavior as she wanders home tipsily in the morning: Her unresolved emotional issues are taking physical form some 6,600 miles away. It's a silly premise, presented with absolute conviction by Hathaway, Sudeikis and writer-director Nacho Vigalondo, but you don't have to completely buy in to appreciate what Colossal is doing. Giant monsters may do a lot of damage, but the film finds just as much terror in bad relationships and human nature.

At times, Vigalondo overdoes the film's "maturing millennials" credentials. (Gloria exclaims, "It's like a Wes Anderson movie in here" when she sees Oscar's bar, despite its complete lack of coyly retro design features or Françoise Hardy songs on the jukebox.) Fortunately, though, these moments are few, and Colossal retains a slightly jaded view of contemporary life. 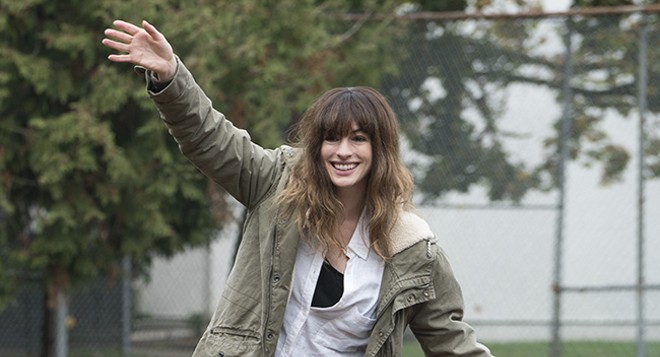 The characters are connected online but unable to communicate, so alienated from life that the havoc on the other side of the world becomes one more on-screen distraction. Vigalondo minimizes the scenes of kaiju chaos but cleverly turns them into a subtle environmental detail: When Monster and Robot are fighting off-screen (as Gloria and Oscar butt heads on screen), we hear the reactions of the unseen audience cheering them on.

At the center of it all, towering over the special effects and the genre-bending tricks, is Anne Hathaway, giving a rich, multifaceted performance that requires her to be loser and hero, victim and monster, often in the same scene. Hathaway has played lovable screwups like this before, but as Gloria transcends her own weaknesses, the actress provides her with a combination of innocence and fierceness that gives real-world depth to the film's monster-movie fantasy.

But don't make the mistake of thinking that Colossal is some kind of life-affirming allegory about battling inner demons. There's a refreshing lack of sentimentality and not a trace of pop psychology to be found here. As the violence — not all of it physical — escalates, the film crosses boundaries in a surprisingly satisfying climax that pushes the balance of the film firmly over to its pop/junk monster side without abandoning the humanity that Hathaway and Vigalondo have so carefully established. Colossal reaches what would be a worthy ending for any city-stomping monster movie, but with a thought-provoking twist. We've seen the damage that its far-fetched creatures can do, but we've also seen what pushed them to it.