By now, chef Timothy Adams doesn't bat an eye when he gets the inevitable question from one of Il Palato's confused diners: Where's the spaghetti and meatballs?

Such questions are bound to happen. After all, the restaurant is owned by Michael Del Pietro, a prolific restaurateur whose surname carries the weight of decades in the business and the expectations that come with it. The Del Pietro family has had a major role in defining what is meant by St. Louis-style Italian food. Since 1976, when Mary Rose and Michael Del Pietro Sr. opened the iconic Del Pietro's on Hampton, the family has been synonymous with the red sauce dishes the city so deeply loves.

Through it all, Michael Jr. was there by his parents' side and felt a calling to carry on their legacy after his father passed away in the late 1980s. However, he was determined to forge his own culinary identity, and, after graduating from the Culinary Institute of America in 1994, he launched his own restaurant group that includes such well-received restaurants as the former Portabella and Luciano's and the current Sugo's Spaghetteria, Babbo's Spaghetteria, Via Vino, Tavolo V and a modern update of Del Pietro's located on Big Bend. Del Pietro's restaurant pedigree appealed to Adams because it was similar to his own.

Growing up, Adams' parents owned the popular Lafayette Square Italian eatery Ricardo's Italian Café, a place that, not unlike Del Pietro's restaurant, was known for northern Italian-inspired comfort with a St. Louis twist. Ricardo's closed in 2015, but the business got into his soul. Adams decided to go to culinary school at the French Culinary Institute in New York (now the International Culinary Center), where he specialized in Italian cuisine. For the first few months of the program, he learned the basics in the United States before departing for the prestigious ALMA, a school just outside of Parma, Italy. 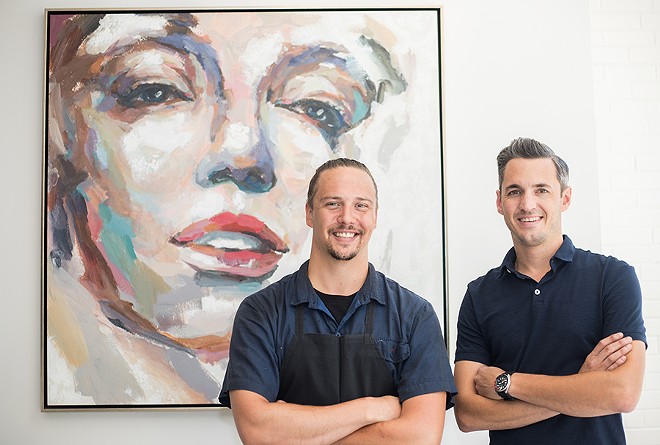 During his time there, Adams soaked up all the knowledge of traditional Italian cuisine that he could and applied what he learned while staging at an acclaimed restaurant in Alba. Even when he returned to the States, he found himself cooking high-end Italian cuisine at such prestigious restaurants as Spiaggia in Chicago and the former Cielo in the Four Seasons Hotel St. Louis.

When Adams met with Del Pietro about the Il Palato executive chef gig, there was an immediate connection, not just because of their shared past but because of their vision for the future. Del Pietro wanted Il Palato to be a modern, elevated restaurant that offered something different from what's expected in the St. Louis Italian restaurant scene. Adams was eager to bring that vision to light and did so in the form of a menu more in tune with the lighter culinary leanings of the country's southern regions than the offerings found at either's family restaurants. 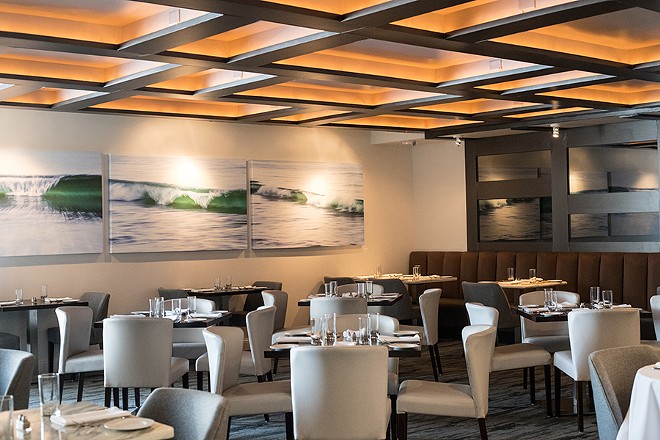 Your first clue that you should not ask for a side of pasta con broccoli is the space. The moment you walk into Il Palato, you're awestruck by how light and elegant it is. What was once the dark and busily decorated Remy's Kitchen & Wine Bar has been transformed into a bright, modern space outfitted with white marble and a recessed ceiling that glows with soft, rose-gold-hued light. Luxe taupe velvet banquettes, gray upholstered chairs and white-tableclothed tables provide seating in the dining room. A few pieces of modern artwork, including an abstract painting of Marilyn Monroe, add interest to the stark white walls.

The vibe is more that of a swanky hotel in Sorrento than a St. Louis red sauce joint, a feeling that carries through to the food. Charred zucchini is pureed with olive oil, forming a luxurious bittersweet dip. Thin slices of grilled bread and even thinner, lengthwise shavings of zucchini are provided for dipping. It's a simple, powerful dish – a tone-setting example of what Il Palato wants to achieve.

A flatbread appetizer is another pleasant diversion from the standard Italian American playbook. An airy crust — fluffy on the inside, buttery crisp on the outside — serves as the base for corn puree that melds with molten taleggio cheese to form a subtly sweet, decadent concoction that substitutes for a sauce. Thick slices of zucchini garnish the plate, and several drops of neonata (a condiment made from fish and hot peppers) give a haunting suggestion of spicy funk.

Adams gives his bruschetta a coastal Italian twist by topping it with gorgeous, grapefruit-colored cubes of diced tuna. The fish is tossed in shallots, garlic, olive oil and fresh tarragon, turning it into a southern Italian riff on poke. Cured egg yolk adds richness to this spectacular dish.

The only appetizer that failed to impress was the cozze, or mussels. I enjoyed the sauce that covered the base of the serving bowl — a white wine, shallot garlic broth enlivened with fiery nduja sausage. The mussels themselves, however, were dried out, some so much that they were shriveled. It gave an otherwise promising dish an off texture.

Adams shows his skill in preparing fish in Il Palato's numerous seafood offerings. Idaho trout, roasted skin on to give it a layer of crispness, is flawlessly cooked and served on a bed of fingerling potatoes enlivened with olives, tomatoes and artichokes. The brininess of the olives and artichokes season the dish in a way that accents without overpowering it. 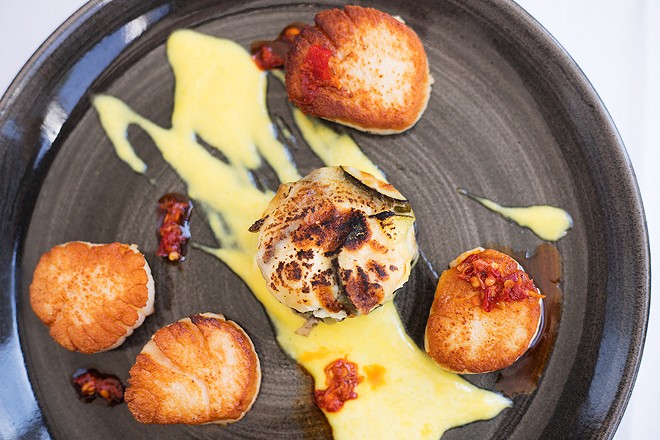 Scallops are also outstanding. Plump and seared so that the outside develops a delicate golden crust, the large shellfish are served alongside rich saffron cream. It's a beautiful if not decadent pairing, but Adams cuts through this richness with a few demistasse-sized spoonfuls of neonata. It's a thoughtful touch that balances the dish. 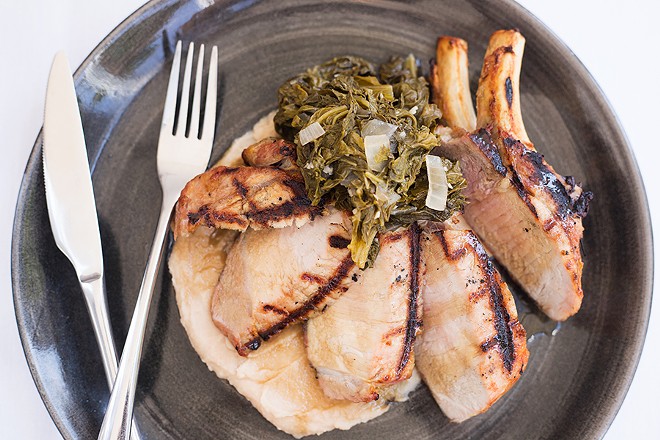 Branzino, a whole Mediterranean seabass stuffed with fresh herbs and a lemon slice, is presented as simple as if you were at a beachside cookout. Unfortunately, it was overcooked, a factor which came to the edge of drying out its delicate flesh. Il Palato may be seafood focused, but the restaurant also excels with its meat dishes. A half game hen is perfectly cooked so that its flesh is succulent while its skin crisps up to a gorgeous caramel brown. Red wine vinegar, red onions and a best-in-class panzanella salad electrify the dish. An equally flawless pork chop dazzles with accents of vibrant pomegranate reduction and lemon oil. White bean puree adds an earthy touch to this outstanding main course.

Il Palato may impress at many turns, but its pasta dishes are where it stands out the most.

You can tell that Adams spent days on end making and cooking pasta in Italy — not only does he imbue his pasta dough with such shockingly rich flavor, he cooks it impeccably al dente so that there is a pleasant chew to each bite. Orchietta is tossed with Brussels sprouts and salsiccia. The fennel-kissed sausage mixes with the accompanying ricotta cheese to form a decadent cream sauce that coats the noodles.

The ravioli preparation changes regularly; on my visit, I was treated to a wonderful version stuffed with a puree of beets and mascarpone. The dish's highlight was a brown butter sauce that wrapped the pasta in a nutty richness. If I was happy with the orchietta and ravioli, I was over the moon as a result of Adams' tortellini. The wonderful noodles were shaped like miniature wonton dumplings and filled with a mixture of peak-of-the-summer corn and mascarpone cheese; the filling oozes out when pierced, mixing with the sweet corn broth that glazes the exterior of the pasta. Shiitake mushrooms and slivers of chiles finish this outstanding pasta.

If you ended your meal here, you'd be properly satisfied. However, Il Palato offers a handful of desserts that give you just a taste of something sweet without being overbearing. Tiny, honey-glazed doughnuts offer a yeasty, sticky treat that is akin to funnel cake. Just as wonderful, the strawberry sorbetto captures the very essence of freshly picked strawberries. It's the Platonic ideal of the fruit, distilled into a refreshingly frozen form.

It's not unlike that tortellini: a simple dish, yet a masterpiece of flavor, texture and presentation that represents the essence of modern Italian cuisine. After one bite, you'll wonder why you asked for spaghetti and meatballs in the first place — if you can remember such a dish even exists.