I Feel Pretty Is a Huge Missed Opportunity

When the trailer for the body image satire I Feel Pretty debuted online, the internet was furious. The film looked like a gender-bent version of Shallow Hal, with internalized misogyny in contrast to old-fashioned male chauvinism. Luckily, I Feel Pretty is not nearly as offensive as the trailer would make it out to be, but it's still a problematic clusterfuck that has absolutely no concept of how the real world works.

Amy Schumer stars as Renee who has been gaslighted to the point that she believes she's too unattractive and uninteresting to be successful. Playing a self-loathing woman living in a world where everyone appears to be smarter, faster, thinner and prettier allows for audiences to immediately identify with the character.

However, all of this changes when Renee hits her head at a SoulCycle class (because of course it has to be fucking SoulCycle) and suddenly perceives herself as the most gorgeous woman in the world. Nothing is different about Renee physically, but her newfound confidence gives her a new lease on life and a new perspective. I can already hear the undeserving "Yaaaas Queeeeen!" chants from here.

I Feel Pretty isn't unique in using a body swap as a plot device (see: Big/13 Going on 30/Freaky Friday/17 Again), even if its swap is only in the heroine's head. The triteness is disappointing considering the script comes from Never Been Kissed's Abby Kohn and Marc Silverstein. I commend the duo for creating a film that focuses more on self-love than on changing to appease the world around you, but I Feel Pretty still misses the mark on what could have been an influential film.

Once Renee begins living with her Beyonce attitude, everyone around her seems perplexed. How can she be so confident with that figure? Given that Schumer is not the bridge-troll she once believed herself to be, the reactions of everyone around her are laughably unbelievable. With the revolutionary start of the body positivity movement and the popular #EffYourBeautyStandards mantra adopted by many plus-size women, it's a bit odd that Renee's friends and co-workers can't possibly understand why she's suddenly sowing her wild oats and feeling herself. Sure, these people also live in a world that's consistently telling them they'll never be good enough, so there's a lot of projection of their own insecurities in their confusion as to why someone deemed "lesser than" is acting like she's anything but. The projection, however, feels inauthentic and fails to build up the "love thyself" message.

The moral that I Feel Pretty is desperately trying to deliver doesn't even make it out the door. Is it important to preach confidence to women living in a society that tells them to hate themselves? Yes. Is it empowering to see a woman owning her appearance? Yes. Is self-love and confidence the key to happiness and success? Hell no. Telling women that "all you need is confidence" is just as unrealistic as telling children "when you grow up, you can do anything." The only reason Renee feels so confident is because she's convinced she's the hottest babe on the planet. Her confidence still feeds into the cycle of "look a certain way and you'll finally be happy."

And while Renee's life does turn around once she starts living her life to the fullest, her big breaks are all opportunities of circumstance. The beauty company she works for has realized they have to start marketing to "normal people," and therefore promotes Renee. This isn't some great earned achievement; this is a token position where she happened to fit the criteria.

I Feel Pretty also never addresses the privileges already afforded to Schumer for being only slightly less conventionally attractive than the standard. Had this movie starred a larger actress like Melissa McCarthy or an actress of color like Tiffany Haddish, Renee's work experiences would be a hell of a lot more difficult whether she was confident or not. 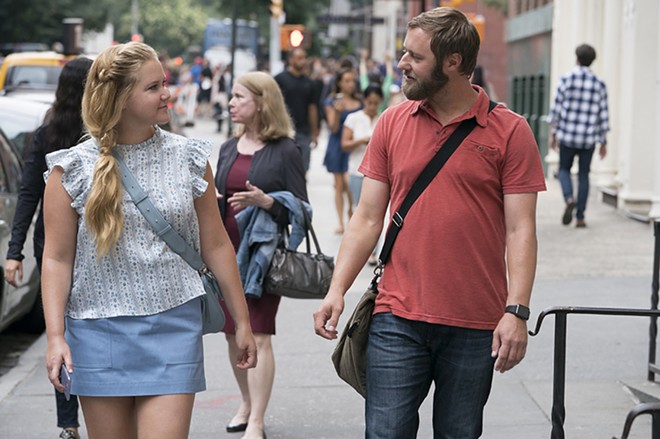 Michelle Williams plays Schumer's boss in what is arguably the best comedic performance of her career. She steals every scene she's in, largely due to the fact she's the only comedic presence that isn't hashing out the same "LOL Y U SO CONFIDENT, CHUBBY LADY?" joke that overwhelms the rest of the film. For diehard Williams fans, this is a refreshing change of pace for an actress often pigeon-holed as a distraught lover. Renee's romantic interest is played by the completely adorable and endearing Rory Scovel, who delivers a masterful leading-man debut.

I desperately wanted to champion I Feel Pretty, but I cannot in good faith hail it as the feminist masterpiece it so fiercely tried to present. Despite what mouth-breathing Redditors have to say about Amy Schumer, she is a revolutionary comedic performer. Unfortunately, I Feel Pretty does her no favors and her talent cannot save her from a jumbled script and repetitive jokes.