David Bailey and his culinary team had no idea what kind of pizza they were making when they were developing the recipes for Hugo's Pizzeria. That's not to say they lacked vision. Bailey knew exactly what he wanted — a crust sturdy enough on the bottom to hold generous toppings, a touch of crunch balanced by a pillow-like chew, a sauce that ticked both the sweet and spicy boxes — and he went through many iterations to get it right. He just didn't know what to call it, and only after he had settled upon the formula did he decide on a name. He did that by researching pizza types, finding one that looked about right and saying, "Roman — yep, that's the one."

Bailey's process is a stark contrast to the former occupant of the Hugo's space and, really, much of what is being done in the national pizza scene. In the Midtown building that now houses Hugo's, Mike Randolph launched his St. Louis empire with the Good Pie, a fiercely authentic Neapolitan pizzeria that set the standard for the traditional wood-fired pies now found throughout the city. Though not certified by the Neapolitan pizza regulatory authority (yes, there is such a thing), the Good Pie served about as traditional a pie as you could get outside of Campania. Though there was room for creativity, the style dictated the pizza.

Now the space is again a pizzeria, but this time it eschews tradition or stylistic dictates in favor of personal preference and creative freedom. It's a fitting culinary philosophy for Hugo's; after all, the restaurant was inspired by Bailey's son Hugo, a four-year-old he describes as fun, super cute and full of energy. If you tell Hugo to color inside the lines, chances are you'll be fighting a losing battle. No one wonders who the little guy got that spirit from. Though Bailey is now recognized as one of St. Louis' most prominent restaurateurs, he began his career delivering pizzas, bussing tables and trying to figure out what to do with his life.

As a child, Bailey had been home-schooled until he convinced his parents to enroll him in a traditional high school. Hating the structure, he dropped out and went to college. He was fifteen.

He found himself a college graduate at the ripe old age of nineteen and in need of a career path. Though he knew medical school was not for him, he realized his desire to become a doctor was rooted in his wanting to work with and take care of people. He worked his way up the ranks through just about every position in the industry before launching his first restaurant, Baileys' Chocolate Bar, in 2004. Daytime spot Rooster came next, followed by Bridge Tap House and Wine Bar, Baileys' Range, Small Batch and Shift Test Kitchen & Takeout.

Pizza, however, has always been a concept Bailey wanted to explore, especially now that he is a father of two young children and finds himself eating it as much as anyone with kids does — in other words, all the damn time. He's heard the joke that even when pizza is bad, it's still good, but, as someone whose circumstances compel him to eat it regularly, he feels that's a cop-out. Why settle for less when you can have more? In that spirit, he set out to create not only the best version of crust, sauce and toppings he could, but also an eatery that is warm and welcoming to all, including those with littles. Hugo's Pizzeria is indeed a lovely, comfortable space. The restaurant is twice as big as its predecessor (two bays of a four-bay building, plus another bay for the kitchen), with two rooms featuring lofted ceilings, exposed brick and muted green walls. A large wooden bar takes up the majority of one room; the other is filled with blonde wood tables surrounded by yellow-painted metal chairs. Credit the bright note of color or credit the bustling energy; either way, the place feels joyful.

Bailey has also succeeded in delivering a welcome addition to the city's crowded pizza scene. His tenacious research and development was time well spent. His crust is made from a roughly 50-50 ratio of all-purpose flour and a super-fine 00 flour that is bromate free. (Often used in U.S. baking, bromate is a controversial additive that helps dough rise higher and turn out more springy, though it's been banned in several countries because of a purported linkage to cancer.)

The recipe results in a pizza crust that has the thickness of naan with the chew you get on the edges of Neapolitan pies. Round, twelve-inch pies made for sharing, the pizzas are cooked in a deck oven so they crisp up ever so slightly on the bottom, without the char speckle you get from a hotter, Italian wood-fired oven. Without the char, the subtle, almost nutty yeastiness of the dough shines through.

Hugo's crust has a uniform density throughout, allowing Bailey and company to heap on the toppings, including a house-cured beef pepperoni that's reminiscent of a spiced, paprika-laden bresaola. The paper-thin meat is liberally placed atop Hugo's signature sauce: an herbaceous tomato-based concoction that's semi-sweet and moderately spiced. Paired with gooey mozzarella cheese, it's a wonderful haute version of a classic pepperoni pie.

The sausage pizza follows suit — familiar enough to be satisfying but elevated enough to be a standout. Hugo's calls its version Italian sausage, but the flavor profile and crumbly texture make it seem more like a marriage of Italian sausage and chorizo. The addition of pickled red onions gives a pop of brightness that makes it anything but ordinary.

After these more classic pies, Hugo's mixes it up, with unique offerings including "Lyla's," a sauce-free umami bomb of a pizza laden with mushrooms and truffle oil. Fontina cheese provides a creamy backdrop, and a whisper of fresh rosemary perfumes the earthiness of the mushrooms and truffle oil like pine needles on a forest floor. For a dish with few ingredients, it is remarkably complex. 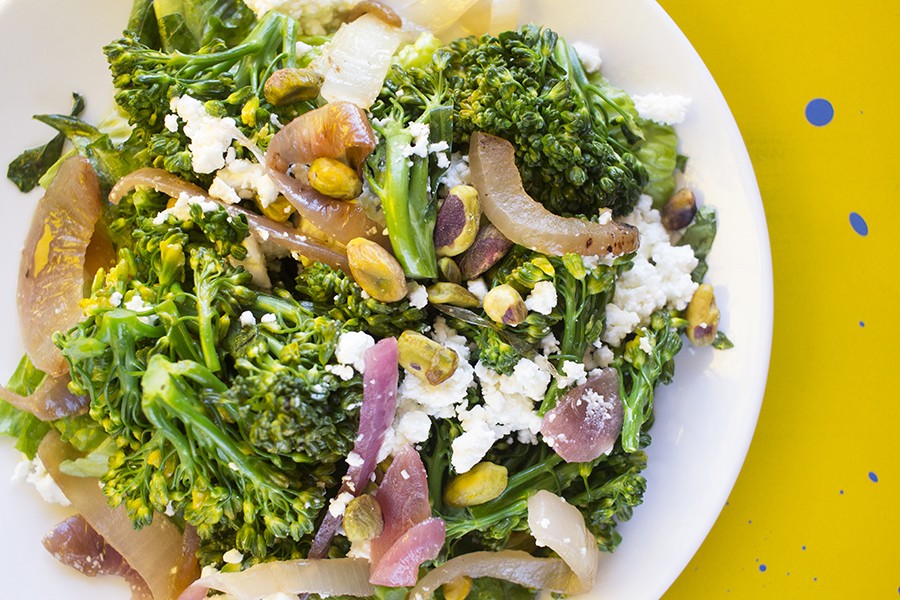 If you want to meet your daily quotient of veggies in one sitting, the "Green" has you covered; actually, it has the entire surface of the pizza covered, with a field's worth of mushrooms, roasted tomatoes, broccolini and arugula set in béchamel sauce and feta cheese. The vegetables are perfectly cooked so they retain their crunch. The sheer volume can make the pizza a bit unwieldy, though the pleasant flavors make it worth messing your way through the muddle.

Less impressive is the "White," a béchamel-based pie that proved overly sweet with whole, charred grapes and lemon zest. Prosciutto is meant to balance the sweetness with a salty punch, but the grapes overtook it. The effect of the grape-citrus blend was reminiscent of sangria — not a bad thing in a glass over ice, but a bit unsettling on a pizza.

The "Hot Chicken" pizza, however, is revelatory in its ability to be both sweet and fiery at the same time. The key is the base of sriracha red sauce that simulates the sweetened chile oil glaze given to Nashville-style hot fried chicken. At Hugo's, the chicken component comes in the form of housemade buffalo chicken pepperoni, sort of a hot wing in charcuterie form. Pine nuts underscore the sauce's subtle sweetness with their pop of perfume, while shredded mozzarella and crunchy celery add a cooling component. If you need more relief, the pizza comes with a side of creamy (and terrific) housemade ranch dressing.

Hugo's serves more than pizza, of course. There are a handful of salads, including one that pairs broccolini with pistachios, red onion, feta and jalapeño vinaigrette. It's a refreshing break from the cheese-covered carbs. A simple crock of meatballs are enlivened with fresh herbs and Hugo's piquant red sauce. Baked with mozzarella cheese, they make for an appetizer that could count as a meal. Sauteed Brussels sprouts are another standout, gilded with a balsamic reduction and paired with hunks of house-cured bacon. 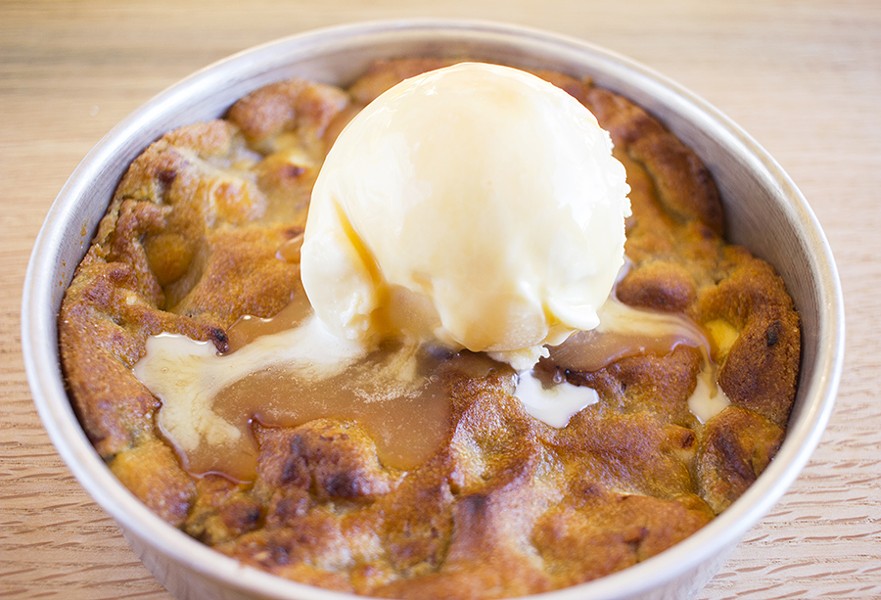 All are delightful, but if the choice comes down to foregoing first courses to saving room for dessert, there is no question. Hugo's only has one choice for sweets, as if to cut to the chase. There's nothing that could come close to the "Blondie Supreme Royale," a molten, caramel-rich blondie served searing hot from the oven in a cast-iron pan. This decadent confection is like the Transformers of dessert: part bread pudding, part half-baked chocolate chip cookie and part blondie lava cake, topped by a scoop of caramel sauce-gilded vanilla ice cream and all working in concert to bring forth something greater than the sum of its parts.

It's hard to say what that blondie is: A cake? A brownie? A cookie? As Bailey has proven with the style of pizza on offer at Hugo's, it doesn't matter. With something this delicious, who cares what you call it?