How to Salvage Your St. Louis Summer

NOAH MACMILLAN Summer is out there, if you look.

This was not the summer we asked for, but it's what we've got.

Instead of bitching about missed afternoons in the stands at Busch Stadium or your canceled trips to three-day music festivals, it is time to make plans for what you can do to squeeze a little enjoyment out of this hellscape of a year. To help, we've put together a bunch of tips, including how to build your own pool, fix up that rusty bike and make a two-ingredient cocktail appropriate for 2020.

The goal is to reclaim a little space for yourself. We're all dealing with a lot: Your job, if you are lucky enough to still have it, is most likely a nightmare version of what it was before, a pandemic continues to rage through the country and the United States seems like it's finally headed for a reckoning on inequality that is fiery and messy and long overdue.

There is work to be done, but don't underestimate the weight of it all. Find a way to do something fun, even if it's just a pass or two through a sprinkler on a hot afternoon. Summer isn't canceled, it's just not what we expected. — Riverfront Times staff 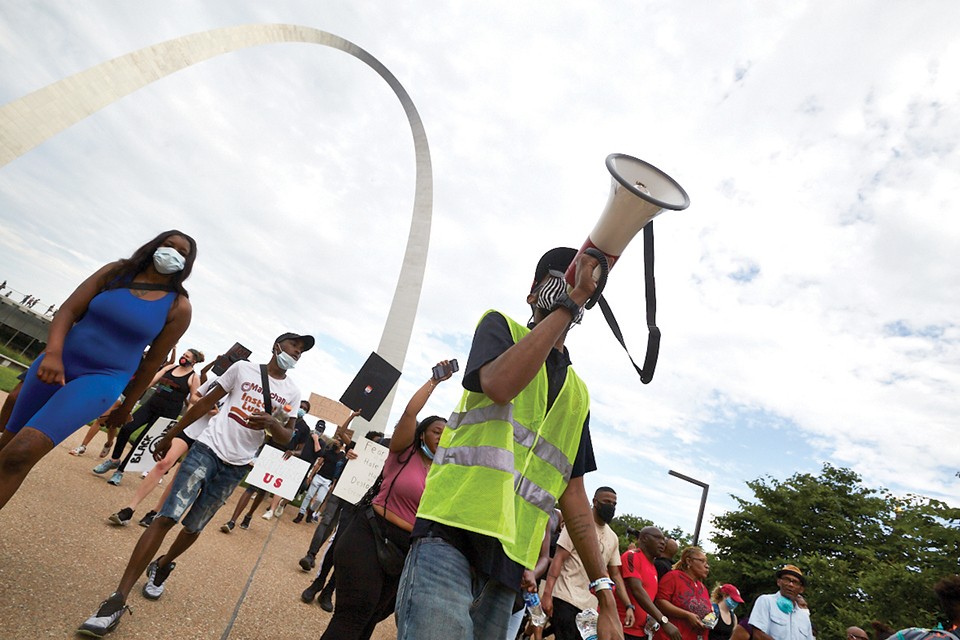 Most of this list is for relaxing and relieving stress, but this country is in a rare moment when the masses can actually force the powers that be to revamp or dump and replace some bullshit systems. Not everyone can march in the streets, but thousands in St. Louis and hundreds of thousands across the nation are taking a calculated risk to show up en masse to demand change. They see staying silent as even more dangerous in the long term than the coronavirus. If you join them, wear a mask, do what you can to protect yourself and others, and keep your eyes on making the United States a better, more just country for everyone.

Build your own pool

For the fun of it, let's say you're pretty rich but not a planner. The creeping heat of summer has sneaked up on you, and you'd like to find a little relief in the form of a cool dip in a pool. But you don't want to swim in the plaguey waters of a communal pool, and you don't already have a pool because, as discussed, you're not a planner. You're already screwed. Even for a wealthy person, like yourself, it's going to take a construction crew two or three months to build you a personal swimming hole. That's a lot of miserable summer to endure.

But let's say you're a regular dude, not too pretentious, not too concerned about what the neighbors think. Good news: You can be floating by Friday. The solution is a backyard hay-bale pool. Affordable and well within a layman's skillset, the hay bale pool can be assembled and filled in an afternoon. Make it as big as you want — maybe four hay bales long and three wide. Double stack them if you want it a couple feet deeper. Here's how you do it: Arrange the bales (about $7.50 each from Lowe's and roughly half that if you know farmers) in a rectangle and drape with heavy-duty plastic sheeting ($15-$20), making sure to leave enough slack to press it against the interior walls and tuck under the bales on the exterior. Cinch it all together with a rope ($10, with plenty of leftover rope) around the perimeter and fill it with water. Enjoy with an ice-cold PBR and jorts.

Buy or borrow one. Hook it to a hose somewhere. Run through it like a little kid.

The outdoors are one of the few pleasures that social distancing left us. If you've got access to forests and trees, by all means, go for it. But there are plenty of adventures to be had without leaving the city, and walking the metro from one end to the other is one. Map out your route ahead of time. Think through-roads with landmarks, changing neighborhoods and maybe a midway spot to buy lunch. If you do it with a partner, you can park one car at the end for the ride home. Alternatively, walk to a public transit stop or choose a circular route. Average walking speed is three to four miles per hour, so plan accordingly. And then start walking. If you've never truly walked your city, it's eye-opening. You will see things you never noticed speeding past in a car or bus. The neighborhoods will roll out in front of you like changing landscapes. Climb staircase mountains, wander through downtown canyons and watch the street lights awaken like a starry night.

Who knows when concerts will return to normal? Everything from outdoor festivals to DIY punk shows have gone quiet. Into that depressing silence has stepped the porch musician. More of a loner than the much-celebrated garage bands of Gen X rom-coms, the porch musician nonetheless has emerged as one of the heroes of pandemic lockdowns. And lucky you, there is probably one within walking distance. Get to know that hopeful performer. Learn their show schedule and start going to every concert. Tell your friends. Make a fan page. Post setlists. Create some merch. Until live music is back for real, this is your new favorite artist.

Sure, we've gotten pretty good at drinking at home. Our booze order is dialed in. We've experimented with fancy cocktail making out of boredom and returned to the standards out of fatigue and necessity. And we've realized the Zoom happy hour is about as glitchy and awkward as the Zoom business meeting. So it's time to reclaim a bit of the social element of drinking. If you're not quite ready for the bars again, the walking happy hour is a pleasant alternative. It is as simple as it sounds. Open a beer or pour a drink and start walking around your neighborhood. You're out of the apartment, enjoying the fresh air, chatting with neighbors. It feels sort of healthy. Feel free to put your drink in a thermos or opaque plastic cup if you're worried about legalities, but are open container laws even a thing anymore? We've all got more important things to worry about.

Get to know your neighbors

Even if you do manage to get out a bit this summer, chances are the ongoing threat of COVID-19 will have you hanging around your own home more than you might have in summers past. Perhaps it's time to get to know the neighbors better! A camera with a long lens or a pair of binoculars will help a lot with this one. Post up at your, ahem, rear window and really familiarize yourself with those who dwell in your neighborhood. Wow, the lady across the street sure can dance! And that fella down the way is really quite an amazing pianist; it's beautiful to hear him play. Gosh, somebody should do something about that dog over there though — always digging away at the garden. Wait a minute, was that somebody screaming?

Get into the caves

It's a known fact that an underground network of caves, used by beer companies to store their products back in the day, lies beneath the surface of south St. Louis. But few citizens are quite sure how to get into them. Maybe you'll be the one to crack the code! Shove your body into some sewer drains and get to exploring.

Wander around in some abandoned buildings

St. Louis has no shortage of collapsing buildings — schools, churches, malls — and nothing says "social distancing during a pandemic" like the near-post-apocalyptic feeling you get while wandering around inside them. Just make sure to follow proper urban explorer etiquette: Don't take anything, don't break anything, and for the love of all that is healthy, watch your step.

Bring the beach to you

For decades now, the music of the Beach Boys has been synonymous with summer — practically its official soundtrack. So who would better know how to celebrate the season than the band's founder, genius composer Brian Wilson? Take some cues from his approach during his recording sessions in the mid-'60s. Bring the beach to you by filling your living room with sand. Purchase thousands of dollars' worth of marijuana and LSD. Blast "Good Vibrations" on repeat. Descend steadily into madness. Your friends might express concern, but at least you'll have a smile on your face.

You ever just dig a hole just for the sake of digging? Likely not, because what purpose would that serve, right? Well there's no better time than now to find out the answer to that question. Pull out a shovel, head to the backyard, and get some earth moving. Don't bother calling Dig-Rite to check for utility lines or anything — those killjoys will probably poo-poo the idea, and you'll find those lines on your own anyway. Don't stop until you hit magma. Please report back with your findings.