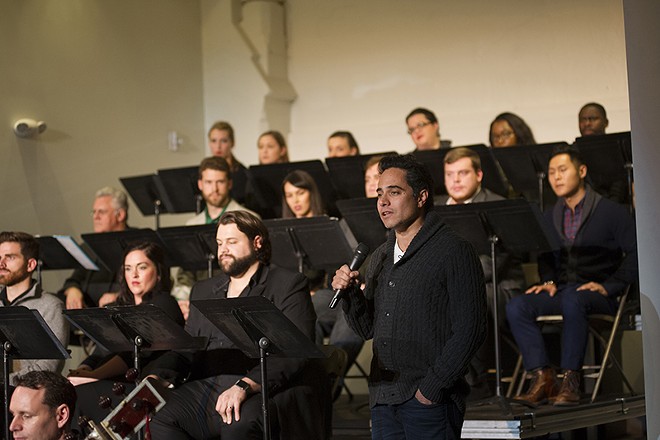 But there's always a middle ground, and when I spoke to Perla the first time, the weekend of the workshop's performance, he was finishing the last part of the opera — and found it there: "We've taken themes and melodic ideas from these ragas that have been now used throughout the opera, but now I'm making them modulated and move through all those harmonic pathways and it's really interesting. It's very powerful," he says.

"There are parts that are really dense and barely tonal," Perla continues. "They are dissonant and clustery and strange and then there are things that are utterly simple, all the way down to major and minor triads and spare textures."

The day after the performance, Joseph and Perla and Robinson got together for a huddle. They talked through the previous night's debut, going over what worked well and what didn't work as well as they thought. Although they were getting closer to the final version — certainly further along than they had been at the beginning of the workshop — they had notes to take home for a few cosmetic changes, as Joseph says.

"This is one of those challenges of adapting a book: We know the story in our heads, but then we don't know if that story is necessarily coming out," he says. When you know something like the back of your hand, you can almost get bogged down in the knowing of it — and it might not translate to the audience, who haven't heard it at all.

So the team reworked and refined, had a recording session, workshopped it again in San Francisco in January. Work was done, as it always had been, over Skype and email and the occasional instances where everyone happened to be in the same city at once.

"It's not like sitting in a room and creating a musical or creating the theme song to Oklahoma!," says Robinson, who was based in Brooklyn while Shalimar was being written. "What we do is look at things and respond to what's being written and share our reactions and that's how the process goes. We don't need to all be together to make the process work."

And then there were more revisions and more tweaks, and finally, by the beginning of May, singers were arriving in St. Louis and rehearsals were about to kick off. By that point, Robinson says, the opera was pretty much in its final form.

"Once you start rehearsing, you don't get a lot of time to make significant changes. It's not like a Broadway musical or something where you have 30 previews and can keep working on it," he says. Instead, he says, the hope is that with the workshopping and reworking, problem areas are resolved before rehearsals for the premiere begin.

Before I came to Cincinnati, I'd had the general feeling that opera was "old," that a work like this was rare because it was modern. When I thought of the plots and themes of the few I was familiar with, I pictured them wrapped alongside some wigs and tucked away firmly in the past until the next performance.

But that's looking back to these classic operas from where we stand now — and in doing so, we forget just how contemporary (and edgy) those older productions were in their own time. Somehow, this seems so much less obvious with opera than, say, with literature.

But after watching Shalimar, after realizing just how contemporary its themes were and how much they spoke to us (and how understandable the singing was), I thought back to an earlier conversation with Küchle.

"The use of modern themes and modern circumstances that are newsworthy in art is not necessarily a new thing," he said. "It's just something that continues in opera."

I wondered if Joseph, who told me that he previously "didn't know anything about opera," had found himself equally swept away. What's next? I asked him. Would he do an opera all over again?

"Now I'm hooked," Joseph replied. "I feel like I would love to get another chance to write a new one and use what I've learned to my advantage. I love working with [Perla] and [Robinson], and it's very exciting — because it can be a fast process, it's all the more interesting."

"I'd love to find something that you'd never think would be an opera and then go for that — something really low culture and then elevate it."