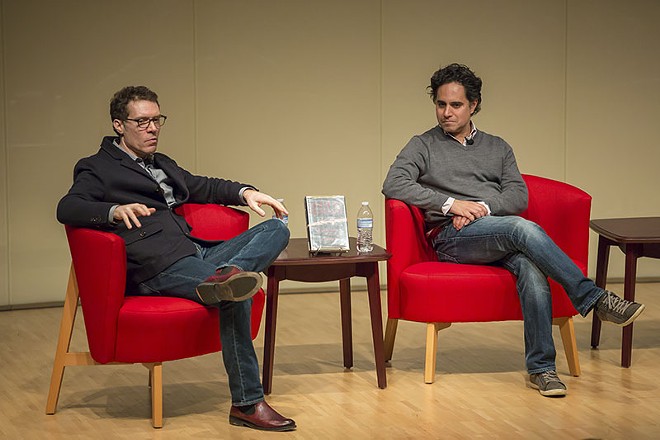 Shalimar the Clown was the first opera Jack Perla ever pitched when he set about on his madcap plan — his words — to be a known opera composer. It was also the last to be commissioned.

Fresh off a three-year stint writing music (more than 1,000 pieces) and directing voiceovers for the educational entertainment company LeapFrog, Perla threw the idea out in 2007 to a some major companies and opera-scene folks while living in San Francisco. It got a warm reception, he says, "but they had other things."

But the opera world — at least the part of it that develops new works — is a small one, and eventually his treatment found its way to Robinson. The story is a lesson in sticking to great ideas: Nine years after its initial conception, Shalimar is about to find its way, fully realized, onto the stage at OTSL.

The company, which mounts a full season of shows each year at the Loretto-Hilton Center on the campus of Webster University, has built a national reputation for its commitment to producing new operas, including 27 (2014), Champion (2013), The Golden Ticket (2010) and Loss of Eden (2002). According to Opera Fusion: New Works' co-artistic director Marcus Küchle, OTSL is an ideal company for premiering new works: Mid-sized companies seem to be more agile when it comes to changing business models.

And while larger institutions like the Met in New York do produce (excellent) new works, there's something about being located in a middle ground — in a "second city" with a medium-sized company — that lends itself to being unbound by venerable tradition, to taking risks and to pushing the envelope creatively. Minnesota Opera, for example, has just produced an adaptation of Stephen King's The Shining.

"At least in North America, it's a golden period for opera because there's so much new work being created that just picks up where old opera already was," says Küchle. In Europe, he adds, the focus is instead on reinterpreting older works in increasingly conceptual ways — an approach that in the U.S. is "met with a certain sense of disapproval" by audiences.

Küchle adds that ambition like Perla's is not an anomaly: There's no shortage of singing talent coming out of schools or of composers who want to write opera.

For Perla, the lag time between his initial Shalimar pitch and actually writing it proved to be a blessing, in a way. Of all his ideas, he says, "it's the biggest and the most ambitious."

It was also a work where he could exercise the full range of his compositional capabilities. With solid source material — the plot surges with classic soap-opera elements: sex, political intrigue, ideological clashes — he divided the novel up into scenes, sketching out a libretto (the opera's "script") and developing a synopsis.

But an opera needs both music and words, and, once OTSL picked up Shalimar for production, the hunt turned to finding a strong librettist — something the opera world is a little short on at the moment, Küchle says.

One was secured, Perla says, but dropped off the project after a year and a half due to geographical challenges (he was in the U.K.) and a busy schedule. So it was back to the beginning.

And then Joseph came on board. The playwright and Pulitzer Prize finalist (Bengal Tiger at the Baghdad Zoo, 2010) had never written an opera before, but bring Rushdie into the mix, and the opportunity to write an opera based on Shalimar was a no-brainer. "Immediately, I was like, 'Yeah, I'd like to do anything that's Rushdie-related,'" he says. Besides plays, he's also written for Nurse Jackie and co-wrote the script for Army of One, a feature film due out this year starring Nicolas Cage and Rainn Wilson.

"The first meeting we had was amazing because I was so tempted to tell him all the ideas," Perla says. "I had so many ideas at that point, and [Robinson] advised me ... he said, 'See what he's thinking.' ... [Joseph] had many ideas I never would have thought of, but there were several big key items that we were absolutely on the same page... There were things that really grabbed him in the book, specific pages and passages that to me, too, were just incredibly powerful."

Joseph hadn't seen a ton of opera before he started writing the libretto. "I'm not this 'opera expert,' so I feel like many people, I think, who aren't used to opera," he says. "I find it a challenging art form.

"It was a totally different experience than writing a play — or even writing a musical, which I've done also," Joseph adds. In opera, the libretto and score are so closely intertwined that you can't really blame a novice for not knowing where to start: "When I asked [Perla] what comes first, he looked at me like I was crazy and said, 'Well, the libretto! I can't do anything until I have the libretto!'"

So Joseph gave himself a crash course: He began seeing more opera and listening to it a lot, and his brother, a classical musician, gave him advice and more operas to listen to. Robinson and Perla chimed in with their own suggestions, too, as well as librettos to read — "and that's when it started making sense to me," Joseph says.

But his task wasn't just to write an opera: It was to turn a nearly 400-page novel about a disputed region in Asia into an opera.

"Whenever I'd be on a subway or on a trip, or at the gym, I'd be listening to it to get the words and the language into my bones a little more," Joseph says (he also read Shalimar twice and listened to it on audiobook while writing).

First, he pared down the source material, letting the narrative shine through. He agrees that he and Perla were on the same page from the beginning — well, pages. "When I met [Perla], it was great because we clearly had thought about the book the same way," says Joseph. "We saw the moments in the book that seemed theatrical and dramatic. Because the difficulty is that it's a very complex and sweeping novel, and to work that down into a magical size for a performance is difficult."

Joseph got a big sketchpad — he uses a different type of notebook for each project — and began to write down ideas. Perla and Robinson sat him down to warn him that a sung sentence winds up about about ten times as long as a spoken sentence.

"So the key to writing a libretto is ... you want it to be as spare and short as possible," Joseph says. "That's a different sort of artistic approach to creating dialogue than the one I'm used to."

Meanwhile, Robinson would help facilitate the creative process, asking questions, keeping an eye on dramatic pacing and making sure that ideas that can be expressed in ten seconds of music don't take two minutes. He also teased out clarity and made sure the team stayed collaborative — which, with a different creative team that had more ego, could have been difficult.

"We all have our eyes on the same target: The goal is to have the piece work," says Robinson. "It's not like anyone gets territorial — they maintain the integrity of what they're doing ... it's not like everyone's digging in and drawing lines. The most important thing is to collaborate."

The team also met with Rushdie during the writing process, sitting down to talk with him for about three hours one day, Joseph says. He now counts the New York-based novelist among his friends, though Rushdie was pretty hands-off, letting the team take his story and run with it.

"He didn't want to kind of really interfere," says Joseph. "He was very happy that we were doing it. He was very supportive. ... Again, since the book is so big, we had a bunch of ideas and he would be able to gently say, 'Well, don't lose track of Shalimar. The book is called Shalimar.'

"And I'd be like, 'Oh yeah, you're right. We've lost track of the main character of the story. We've been obsessed with these two other characters,'" says Joseph. "He was helpful, but since then he's happily stayed out of it and he's excited to come in here. He's listened to some of it and he's very supportive, which I was very happy about.

"One of the fears is that he would hate what I did, and I could see and understand why he would, because — I'm not proud of it — I had to change the story," he says. The cutting room floor inevitably saw some casualties during the adaptation process.

"There's a couple of characters that I cannot believe are not in this, but you can't go down that road because you want every character to be fully alive," says Joseph. "The audience would be sitting there for two days."

Meanwhile, as Joseph wrote the libretto in L.A. and Brooklyn, Perla was working on the score for the long-awaited opera from San Francisco, calling up musical knowledge that he'd first started developing more than a decade before.

Before his LeapFrog stint, he'd been involved with projects in San Francisco's Bay Area, crossing paths with world-class Indian musicians like Zakir Hussain, Aashish Khan and Sultan Khan. "I had been thrown into the midst of that group and learning a bit really by osmosis and just on the job," Perla says. There was also a project with Arjun Verma, a Bay Area sitarist: a small one-act opera that involved Indian music. While Perla composed the words, rather than the music, it's how, he says, he got his "feet wet."

Perla drew on the vastness of Indian musical tradition — "incredibly rich and multi-layered," he says — to build out his score. He did it most notably through the use of raga, a melodic mode used in Indian classical music. For those not familiar, "raga is like a collection of melodic ideas, do's and don'ts," Perla says, adding that "it's been really interesting and powerful to see how those materials can enhance the drama enormously — and challenging to make it work."

Part of the challenge was creating a bridge between two cultures' musical traditions. In Western music, he explains, there's a "love of harmony and the movement of harmony," whereas Indian music is "intensely melodic" and can bring the listener to a different place from where they began.

"There are parts that are really dense and barely tonal," Perla continues. "They are dissonant and clustery and strange and then there are things that are utterly simple, all the way down to major and minor triads and spare textures."

But there's also the audience to consider: The debut, after all, is not taking place in India but in the American Midwest.

"Some parts of the opera it's really 'Indian music lite,' and other places it's quite thorough going," he admits. "There are one or two scenes that were really much more a thorough working-out of a raga and working in all its components and parts."