How Lucero Built Its Fan Base — One Venue at a Time

COURTESY OF THE BAND "I think people feel a connection to something bigger."

On a June morning in 2006, Lucero frontman Ben Nichols played solo in the back of the Loop record store Vintage Vinyl in an attempt to promote his band's Twangfest performance that night as well as its recent album, Nobody's Darlings. For a crowd of ten to fifteen people, Nichols took requests, joked that certain songs would require a bloody mary and generally behaved as though he was singing for a group of drinking buddies.

Over the last decade, intimate moments like that have allowed Lucero's hybrid of folk, country and punk to go from playing one night as part of a festival to headlining two nights at Off Broadway, as the band will on April 15 and 16. The Memphis act's unique live show, according to bassist John C. Stubblefield, has helped cultivate a loyal fan base.

"People come out to the show and it's a game changer," Stubblefield says. Lucero performances are far more participatory than your average band, he says. At many other concerts, "there's a big disconnect — people looking down at their phones. But you come to a show and everyone is singing along — it's not a common thing these days. I think people feel a connection to something bigger." 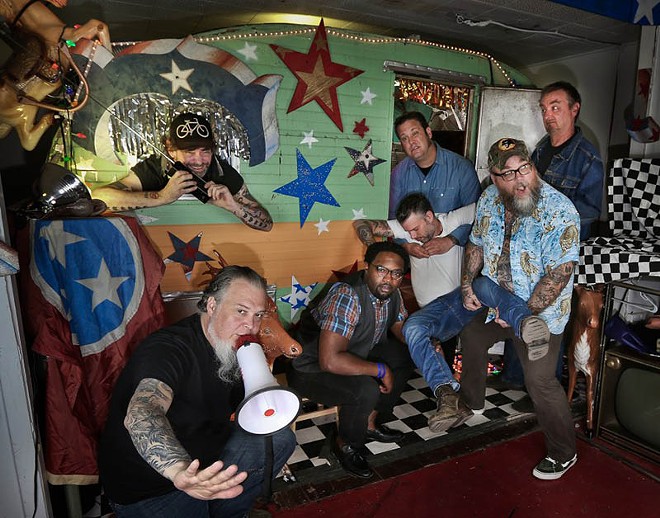 One of those people is Bart Darnell, a fan who first experienced the band during that Twangfest show ten years ago. Since then, Darnell has seen Lucero perform 43 times, from St. Louis to Las Vegas and many cities in between.

"I think it all really comes down to the fact that all the guys in the band are really down to earth and approachable," Darnell says. "That was what hit me the first time I got to see them live. They were just hanging out in the crowd with everyone else and they were extraordinarily nice."

Katie Fletcher, who's been following Lucero for five years, says the band members' authenticity, palpable in its music, drew her in. After initially discovering the group through a "toxic relationship" with an ex, Fletcher's love for Lucero outlasted the relationship. By now she's seen the band more times than she can remember.

"They have such a loyal fan base because they are normal guys who write about things that everyone can relate to," she explains. "Everyone has had their heart broken and tried to fix it with whiskey at some point, I'm sure."

Stubblefield says the band's approach to its fans comes from attending punk rock shows when they were younger. He remembers one venue in Memphis specifically where he would help out-of-town bands set up and then hang out with them afterward.

"It's just who we are," he says. "It's like, people wonder about Ben's voice — how does he sing like that? It's like, 'That's how he talks.' We're fans of music ourselves, and you build it up one fan at a time."

And those people have become their own community. Darnell references the term "Luceroing," a word that fans use to describe trips to see Lucero in different cities.

"Some people may go skiing, camping, or whatever on vacations," he says. "A lot of that group goes Luceroing. It really is a lot of fun when everyone starts making their Luceroing plans, and then you start to see other folks making plans to meet up with others and what not, and it goes on and on."

Darnell's craziest "Luceroing" involved seeing the band one night in Iowa City, driving to Chicago the next night to see some different bands, flying to St. Paul, Minnesota, to see Lucero open for the Replacements and then flying back to Chicago to see Lucero play Riot Fest.

Another big factor in fans' loyalty is the respect Lucero shows for its fans, something Darnell attributes both to the members as people and their roots in the Memphis musical community — roots that it took the band awhile to accept.

"Growing up you want to rebel," Stubblefield explains. "Rebel against your parents, rebel against where you're from ... So if you're from Memphis, you wish you could be a punk rock skater kid."

But as you get older, he says, you become friends with your parents and begin to appreciate where you grew up — and in the case of Memphis, that includes some pretty incredible musical history.

That classic Memphis sound has become more pronounced over Lucero's last three LPs. While the band's earlier albums could be considered a hybrid of alt-country or cow-punk, recent releases have seen horns and keys appear in a pronounced fashion. "It's a nod to our city," Stubblefield says of the band's evolving sound.

That nod became a full-on acknowledgement on Lucero's newest release, All That A Man Should Do. Recorded at Memphis' Ardent Studios (as were the group's previous two albums), the title is taken from a line in the song "I'm In Love With A Girl," originally written by another Memphis band — Big Star. Lucero covers the song on the album, and the recording features background vocals from Jody Stephens, Big Star's sole surviving member.

While recording the album, Stubblefield says the band realized that Stephens — still the studio manager at Ardent — was in town doing a show with Jon Auer and Ken Stringfellow of the Posies, who also served as touring members of Big Star during the group's reunion tours. Realizing all three were available, Lucero decided to cut the track and ask the three to perform background vocals.

Having made connections with both its Memphis roots and the "family" of die-hard fans the band has earned over the course of its career, Stubblefield says the members of Lucero are still conscious of how they've gotten to this point and who's helped them along the way.

"It's been a thing all along, having built this career on our own, one venue at a time," he says. That's why, rather then play one night in a bigger venue, Lucero decided to play two nights at Off Broadway — a place that's been loyal to them.

"Let's do a Friday and Saturday and see if it sells out," Stubblefield says. "It's a way to pay it forward to the promoter."