For a working jail, major parts of the Workhouse don't work.

Every time it rains, water leaks through the flat tin roof and pools on the gymnasium floor. In its kitchen, which produces only bread, insects scurry near a wall-sized row of nonfunctioning refrigerators that serve as storage. Entire housing units are empty, leaving the bathrooms and showers to deteriorate in a slime of soap scum, rust and dirt.

Detainees often describe the Workhouse in the most extreme terms. Some call it hell. Officially, St. Louis calls it the Medium Security Institution.

Inhabited parts of the jail are rarely seen by outside eyes.

Yet on April 24, St. Louis Mayor Tishaura Jones and a retinue of some of the most powerful elected officials in St. Louis swept through the 55-year-old facility, conducting inspections and interviews unlike anything seen in the jail's history.

Along with Jones, the tour group included Congresswoman Cori Bush and Circuit Attorney Kim Gardner, the city's top prosecutor. The group toured both of the city's embattled jails that overcast Saturday, starting with the downtown City Justice Center, the site of multiple recent uprisings, and then heading north to the riverfront industrial area, where the Workhouse looms in a pocket of barbed wire facing an auto parts business.

All told, the group spent five hours in the controversial facility, winding their way through its wide white hallways and cluttered medical offices. They listened as a line of five handcuffed detainees in yellow uniforms took turns describing the Workhouse as they knew it, from being sprayed with mace and left in their cells for hours, their skin burning, to being forced to go months without shoes, a condition that makes the freezing nights — which at times are so cold that one man said he could see his own breath — that much more miserable.

At the end of the tour, a press conference waited for Jones outside the aging jail. What she had witnessed that day, she said, had only further convinced her what must be done: The Workhouse has to close.

The visit had left her "very disappointed and shocked and frustrated," she added.

Bush, a former Ferguson protester, was also shaken by what she had seen and heard that day. The inmates had described repeated water shutoffs and meals containing an unidentifiable protein that they nicknamed "rat back." As Bush walked through a housing unit, she said, she could hear detainees chanting after her, "Free the slaves!"

"We didn't just want to complain about what we think is happening, we wanted access to see what's actually happening," Bush told the press, her voice rising in open disgust. "If you had seen the filth, the utter filth, the trash, the bugs ..."

"This is our work," she added firmly. "And now that we are in a position to do something about it, that thing will happen."

But in the following weeks, a different group latched onto the issue of the Workhouse's conditions — and among them were longtime critics of the campaign to close the facility, including Joe Vaccaro, the chair of the Board of Aldermen's public safety committee. He openly questioned whether Jones and Bush had exaggerated the conditions they claimed to confront that day.

Two weeks later, on a Wednesday morning in May, Vaccaro attempted to stage his own tour of the Workhouse, though with a different aim. Unlike the mayor's group, he invited a TV news crew and reporters to accompany him on what he vowed would be a truly "transparent" tour of the Workhouse.

But Vaccaro's media tour barely got through the front door. Instead, it ran into Heather Taylor. 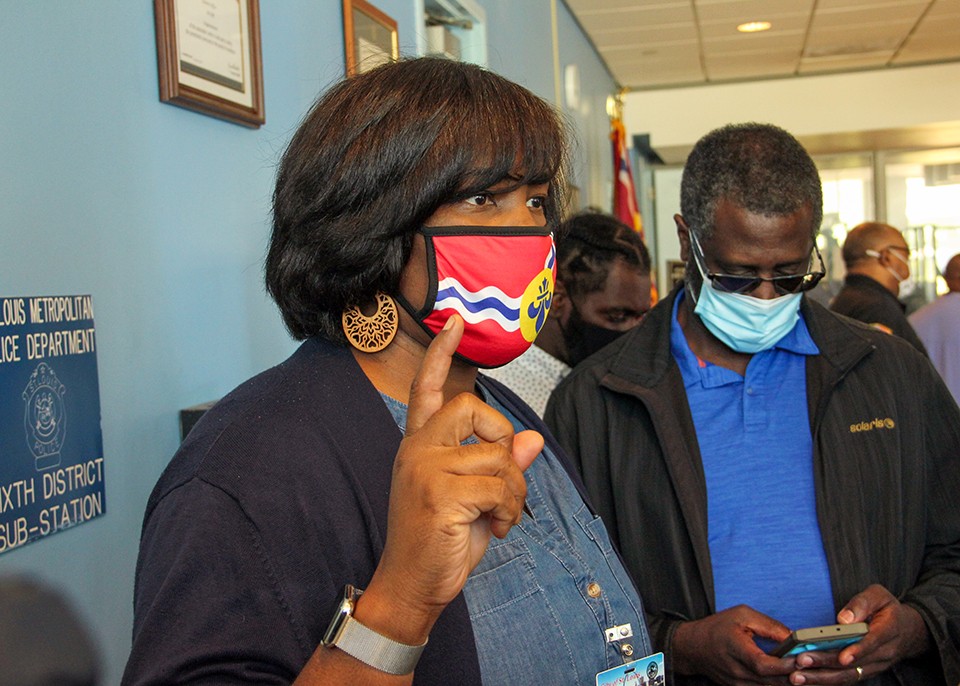 On April 15, Heather Taylor joined the incoming Jones administration as a senior advisor to the new public safety director. A recently retired St. Louis homicide detective, Taylor had spent years as the president and public face of the Ethical Society of Police, a position that brought her into repeated clashes with the department over its failure to challenge the racism and abuse still thriving in its ranks.

Taylor had less than a month on her new job when on May 12 she confronted Vaccaro's attempted tour at the Workhouse entrance.

By then, Taylor had already spent hours inspecting the facility, including a trip just a few days prior with jail Superintendent Jeffrey Carson.

That visit happened to occur on a day of heavy rainfall, and she saw a very different scene than the visitors might have on the sunny morning of Vaccaro's visit. Carson, who has supervised the jail since 2017, had guided her into the gymnasium to view the pools of water on its floor. He had shown her the largely decommissioned kitchen, where he revealed that the ancient gas-powered ranges were so unsafe that he had ordered them removed. As his explanation continued, Taylor pointed her smartphone's camera at the discolored floor, filming two bugs crawling near a large wooden table where detainees bake bread.

Her experience fit with what Jones, Bush and others had reported from their April 24 trip. But on May 12, their claims about trash, bugs and filth became the impetus for Vaccaro to stage a countertour.

It was the latest example of the city government's complicated relationship with the Workhouse. Last summer, the Board of Aldermen voted unanimously to close the aging facility by the end of 2020 — a deadline that passed as the both city jails struggled to adapt to the pandemic. Although Vaccaro had supported the earlier bill, he and other officials began pushing back as the calls to close the Workhouse heightened during the mayoral campaign season — a contest in which Jones, the eventual winner, promised to close the Workhouse in her first 100 days in office.

Vaccaro had not been invited on the mayor's tour. In an interview with KMOV on May 7, he complained the news of the trip had come as "a total shock."

On May 12, during a scheduled tour of the jail by the Board of Aldermen's Public Safey Committee, Vaccaro tried to shock the mayor back. Along with the committee members, he had invited about a dozen local journalists, including this reporter. Once inside the jail's entrance, the media bunched in the small open space between a security station and the glass doors, waiting for Vaccaro's signal. We watched the alders file through the metal detector and into the waiting area.

But Taylor was waiting for Vaccaro. When he presented the group of journalists from the RFT, KMOV, the St. Louis Post-Dispatch, MetroSTL, KMOX and Real STL News — identifying us "as our guests" — Taylor held up a hand.

"They're not coming in," she said.

Over the next fifteen minutes, and with an audience of reporters watching and recording, Vaccaro attempted to negotiate with Taylor. He argued that a media tour was necessary for the sake of transparency. Taylor replied that the rights of the detainees were the city's "first priority," and that while public officials could take photos of what they saw that day, they couldn't film or photograph any detainees.

Taylor repeated herself. There would be no media on the tour.

"This is about transparency," Vaccaro cut in.

Taylor disagreed. "This is about people." 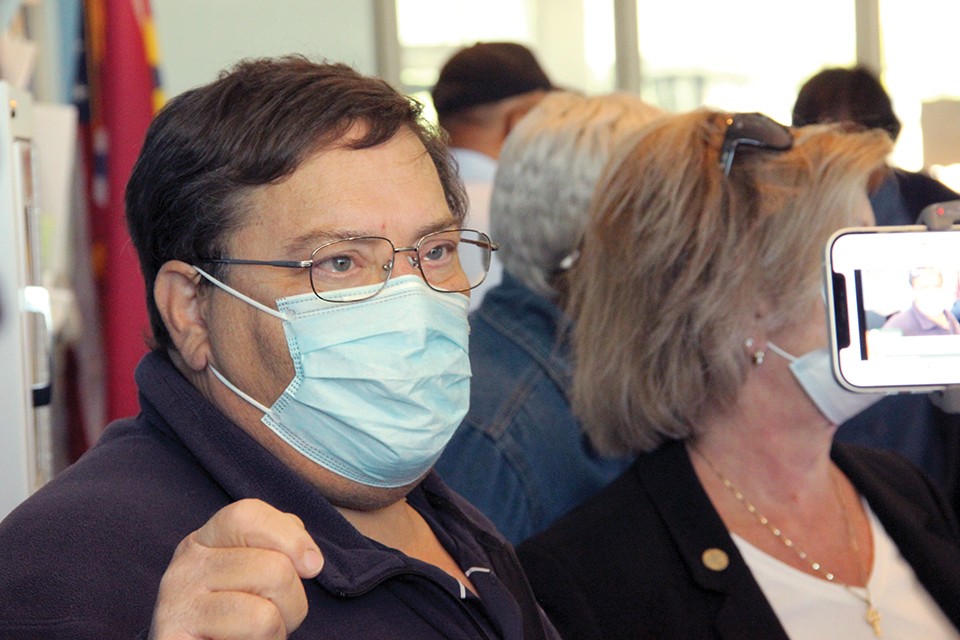 Vaccaro dug in. He didn't believe the mayor's April 24 tour had encountered the conditions decried in the press conference. A fact-finding mission without the media to document the evidence, he argued, would just produce "a whole fake tour about nothing."

Vaccaro brought up complaints sent by former Workhouse residents who had already been transferred to the supposedly more modern downtown Justice Center. There, he said, detainees claimed they were being forced into even worse conditions. "So," he snapped at Taylor, "don't tell me we're doing these people a big favor."

But Taylor didn't budge. "There will be no media here," she said again. "That's the decision, and you can make me the bad guy."

"No," countered Vaccaro, "the mayor will be the bad guy, because the mayor is the one holding out."

He then turned toward the cameras and reporters, a few of whom were live-streaming the debate.

"What are they hiding?" Vaccaro said, now facing his audience. "If the mayor's office is so afraid of what's in this building, why not be transparent? You guys should go ask her. Go to her office. What is she afraid of? What is the mayor afraid of?"