How Four St. Louis Women Protested for Justice and Moved the City

As George Floyd lay dying, he called out for Larcenia.

"Mama!" he shouted twice. But Mama could not help him. Larcenia Floyd has been dead for two years, but the invocation of her spirit in George Floyd's final moments was an act so widely understood, it is possibly the most heartbreaking moment of that video.

As days passed and photos surfaced from Floyd's life, one picture of George and Larcenia showed the tender relationship between mother and son. It's one of George snuggled into his mother's lap, asleep, with both Larcenia's hands wrapped around him. It is a universal image, one that provides comfort and the familiar feeling of having a parent love and protect their child.

George Floyd is not the first Black man to be murdered by police. He is also not the first person whose killing was captured on video. In 2020 alone, the hashtags with the names of Black men killed by police have been numerous. And yet, the women — people like Breonna Taylor, Atatiana Jefferson, Nina Pop and Sandra Bland — trending in recent years on social media have not received the sort of attention that Black men received. There was no major protesting across cities in America, no burning, no intense representation of anger of the masses.

But four young women in St. Louis have not forgotten. Activists Natasha Jain-Poster, Brooke Jones, Bersabeh Mesfin and Daishanae Crittenden see these hashtags and internalize them. They see their friends, sisters, aunts and mothers lost in the Strong Black Woman and Women of Color tropes accepted by society, just as they see their fathers, boyfriends and peers in the Black men slain by police.

Back in 2014, the women were just juniors at Clayton High School and Parkway West High School, friends who'd known one another since middle school. They began seeing each other regularly after graduating, having conversations surrounding activism and the political climate. When Michael Brown was killed, Jain-Poster, Mesfin and Jones protested in Ferguson, while it would be a few more years before Crittenden would join them in their social justice efforts.

As women who identify as Black and Brown, they decided with the killing of Michael Brown, it was time to be the change they wished to see.

"The Mike Brown situation was the catalyst that got us into activism on the grassroots level and in the streets," Jain-Poster says. "But the George Floyd situation happened, and we all regrouped and decided this was something we needed to take into our own hands."

Much has been said in the news regarding protests and the activism of everyday people, but rarely have the now young adults who were in the midst of adolescence in 2014 been given the opportunity to share what it meant to see the body of someone their age lying out in the street in broad daylight.

"For me, it was very scary, because I am the oldest of five and I have four younger brothers," Crittenden says. "Just knowing that Mike Brown was a child and could've been one of my brothers — that was just scary." 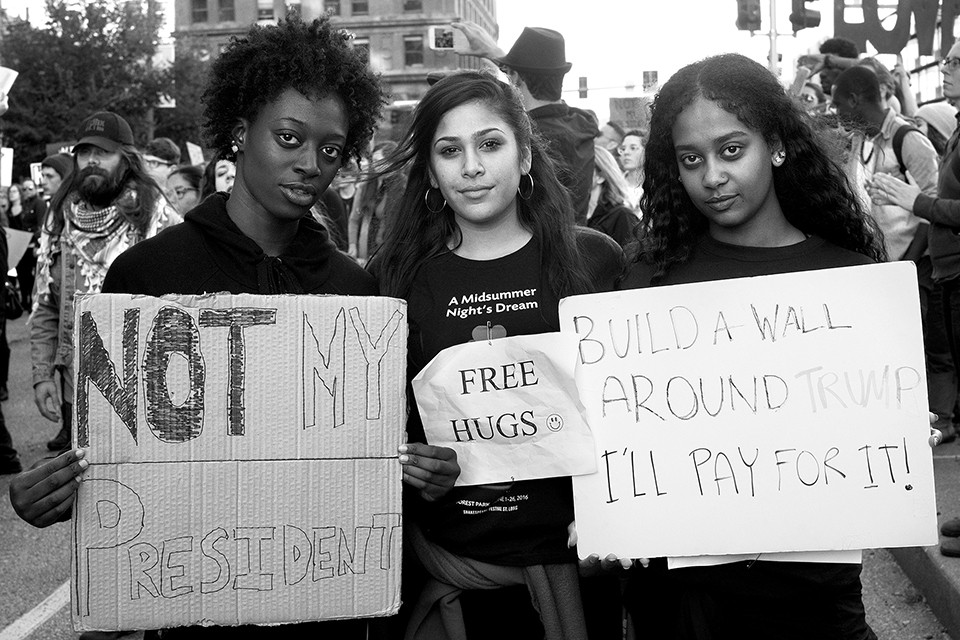 The women recall feeling deeply affected by Brown's death. Several of them knew his family personally. When the events of Ferguson made national headlines, Brown's name and image were lost in a sea of demonization, racism, cruelty and hatred. It was another reminder of what Black people and people of color have faced in the United States for decades.

The collaboration of these four women, all with varying backgrounds organizing community activism, represents the necessity of nuance in the battle for equality. Jain-Poster is a double major in international relations and Spanish; Crittenden is studying elementary education; Jones is a biology and pre-med major; Mesfin is a double major in human and social development and psychology. And while their educational pursuits provide academic insights for understanding the world and political climate around them, they recognize that those studies alone are not enough for anyone seeking equality.

The women agree that Michael Brown was the catalyst and George Floyd the reminder for their activism. In June, the women rebirthed their own movement, with Crittenden joining as the fourth member of the group. Now halfway through college at their respective universities, the women are still unsatisfied with the efforts to raise awareness and speak out against police brutality. So they've gone to work. It was in the collective experience of living during a pandemic and having the time to organize that they found the opportunity to push for more change.

"When we started to talk about the murdering of George Floyd, there hadn't been any action in St. Louis," Jones says. "That's when we said we couldn't keep waiting on somebody to do something, so we went ahead and created our own protest."