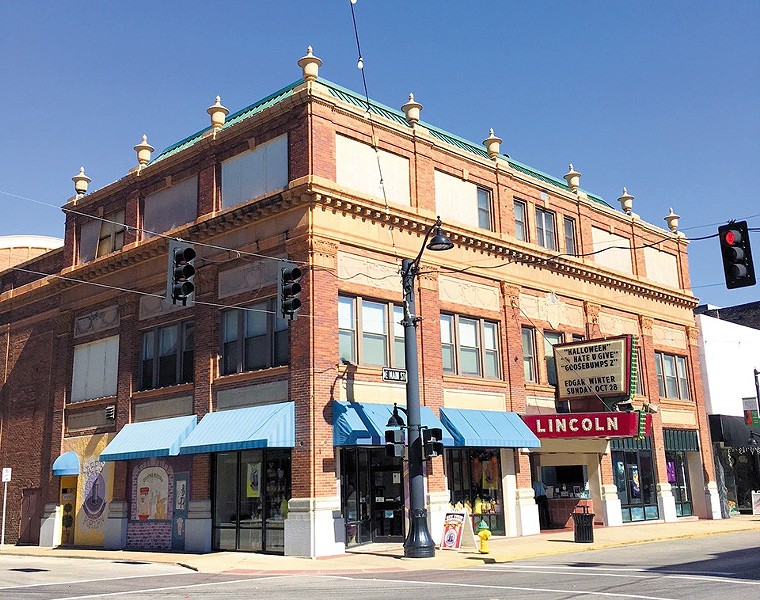 The venerable Lincoln Theatre has been found at the intersection of Main and High streets in downtown Belleville since 1921, holding down its corner since vaudeville was a form of nightly entertainment. It's weathered every type of attack on the role of cinema in our culture. Even during major periods of internal renovation, it never closed, not once, and it's chugging toward a century of continuous operation having beaten back the forces of television, cable, home video, multi-plexes, video streaming and the conversion from film to digital presentation. It's a time-tested landmark, the Lincoln, but even at 97, it's not done reinventing itself for a modern audience.

For twenty of its years, Richard Wright owned the handsome, multi-story brick building, operating the business from 1980 to 2000. A decision he made early in that tenure proved a wise one. As other single-screen theaters were splitting into dual- or tri-plex moviehouses, dividing their main house into multiple rooms, Wright went the opposite direction. The main floor of the Lincoln still contains 550 seats atop its sloped floor; the massive Cinemascope screen that once all but obscured the proscenium was removed. It was the balcony, instead, that was converted in 1982 into two 140-seat houses, allowing for three screens and a stage that reflected the feeling of the Lincoln's earliest days.

And if you were to follow the bouncing ball, Wright's decisions in 1982 allowed his family to rethink the space as a part-time music venue in 2018 and beyond. Wright's daughter Sandy Schoenborn and her husband Dave are the owners today; she grew up in the theater and is helping shepherd in live music today.

While classic rock might be a hook, it won't be the only one, the owners suggest.

"We're looking at a lot of different genres of music," says Dave Schoenborn. "Maybe even comedy, if we do it right and it's an occasional thing. A really good comedy show once or twice a year could pack in a good house. We've done some live events in the past, and we'll be producing them with a professional production company; this should be an awesome room for production. And we can also do local artists, who might not need as much production compared to national touring acts. It'll be nice to be known for live entertainment, movies, concerts."

The Schoenborns are quick to credit Wright for keeping one main hall intact. In doing so, he allowed for a classic, big-room moviehouse to exist inside the Lincoln, even as contemporaries were competing with new suburban theaters with more screens, arcades and lounges. Sometimes, the formula worked; other times, not.

"Because he did that, it's allowed us to venture into these other areas," Dave Schoenborn says of his father-in-law. "A lot of other buildings of that time were repurposed or took their stages out."

Since 1921, of course, multiple changes have occured to the space. Dave Schoenborn can maneuver through every square inch of it, pointing out where a wall once stood or a ticket booth existed. Even the old air-conditioning system, which ran until 2004, has a story: It's being considered for a union museum, he says, "since it was union built and union maintained all those years. It ran like a top." Everything in the Lincoln's basement, it seems, has a story, with Dave Schoenborn an able storyteller.

That basement arguably calls back the olden days most vividly. To stand in that space is to feel history emanating off the walls. Getting down there, you scramble down a short, steep flight of metal steps. At the bottom, you're greeted by a wall of thin, recessed dressing rooms. In these rooms, troupes of vaudeville performers once prepped for shows, with short films silently screening between their performances. With live music coming back to the Lincoln, these narrow spaces are being cleaned up for a new generation of performers, who'll once again be climbing the stairwell straight up to stage left.

With winter coming, the Schoenborns attacked a basement filled with, well, stuff. Sandy Schoenborn notes that her dad was a "pack rat" ... OK, he was maybe, at times, at a borderline "hoarder" level. His addition of a pipe organ in 1996 meant that even more stuff from the pipe-organ subculture was coming through the doors, with heavy, metal bits and bobs scattered all through the basement. Along with friend/music booker Stan Sirtak, the theater's owners have been attempting to recreate a bit of early-twentieth-century spark in that space even as they clean out the clutter.

Of course, the subterranean spaces of the Lincoln won't be seen by many other than the theater's staff of a dozen, plus the occasional performer or sound tech. Another addition that came with the return of live entertainment, though, will be enjoyed by the wider audience upstairs: The Lincoln has been granted a liquor license, and Dave Schoenborn has already figured out how the lobby can be adapted to accommodate a pair of satellite bars.

As long as KSHE is broadcasting, of course, the greater St. Louis region is going to need rooms for the rock acts of yore. For years, the Wildwood Springs Lodge in Steelville has been serving up intimate classic rock shows. Touring acts regularly dot the calendar of the Wildey Theatre in Edwardsville. And rooms closer to the city center, like Pop's, field the odd classic rock show, too, creating real competition among talent bookers.

Asked about having a wish list for the Lincoln, Sirtak is quick to say "yes." But he's equally quick to note that until contracts are signed, he'd best keep that list close to the vest. Already, some of his leads have come up empty, acts booked at other venues after initally showing interest.

"We'll have a calendar of concerts out [shortly]," Dave Schoenborn says. "We're moving into the winter season, when the movie season slows down."

The Lincoln is back in competition again. This time not against laser discs or stadium seating, but against music venues. Which the Lincoln Theatre seems to be once more, all these years later.