In rock & roll, reinventions are a gamble. Where pop stars are almost mandated to change styles or producers or haircuts every album cycle (see: Taylor Swift’s ritual slaughter of all former Tay-Tays on her newest video), rock bands have to hold onto some veneer of authenticity.

But when the St. Charles-bred trio Clockwork was ready for a new direction, the band opted for a hard reset. In 2015, the group was one of a handful of local acts at LouFest; having grasped that brass ring, it seemed like a good time for the band members — singer/guitarist Jordan Slone, his brother Logan Slone on bass and drummer Logan Mohler — to try a new direction.

Two years later, the trio has re-christened itself as Hounds and is sporting a self-titled debut release that vibrates with sturdy and durable indie rock reminiscent of the Cold War Kids and Dan Auerbach’s solo work. According to Jordan Slone, the group’s new sound comes with the benefit of age and experience; having formed the band in their teenage years, these mid-twenties musicians were ready for a fresh approach. 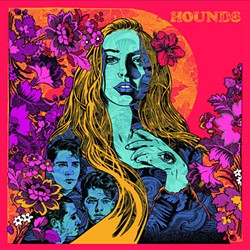 “We have taken it a very different direction than what we were before,” Slone says of the transition from Clockwork to Hounds. “Clockwork was a lot more controlled by other people, which was OK — we were young. But this is a lot more on us. Before, it kind of felt like it wasn’t fully something that we were responsible for.”

The “other people,” Slone says, were a collection of industry pros and connected well-wishers who saw promise in a muscular but malleable young band. He remains grateful for the tutelage, likening the learning experience to the years of residency that physicians undertake — but without the ultimate mission of life-saving.

“With the Clockwork stuff we were still learning and bringing in other people to learn from them,” Slone says. “It’s been six years of learning and taking notes before becoming Hounds.”

Hounds’ self-titled debut shows traces of stylistic detours and a modicum of studio wonkery — early cut “Head in the Sand” tries on some clunky near-reggae before settling into a more satisfying atmospheric coda that emphasizes Slone’s vocal chops. At its best, the band traipses over the undulating contours of psychedelia with a deft touch and an adherence to pop song structures; there’s even a reverent, if rushed, cover of Jefferson Airplane’s “White Rabbit” in the middle of the disc.

But when Hounds burrows into its simple but hypnotic grooves, the effect is warm and engrossing. “Sunburnt” gets this mix right, with a simple, circular guitar figure and light, clattering percussion giving way to multi-tracked harmonies reminiscent of early Fleet Foxes. A few light static-guitar bursts only burnish the mood.

Jordan Slone’s guitar arsenal shows reverence to his British Invasion forebears — he favors a Rickenbacker guitar through a Vox AC30 amplifier, not unlike a young John Lennon — and, like a lot of young rock & roll acolytes, Slone spent some time with a classic of the form.

“I spent a lot of time learning how drums were being tracked on Abbey Road, just learning about the experience as they were doing the medley half of the record,” says Slone. “We wanted it to be a start-to-finish experience.”

In addition to studying the classics, Slone says that when he and his bandmates were charting their new path, they took a methodical approach to examining Clockwork’s strengths and weaknesses.

“We had started picking up on the places where we had holes in our writing,” says Slone. “We wanted to take a step back and see if we were proud of what we were doing.” This was especially true when recording Clockwork’s two releases; Slone says that the band’s youth led to indecisiveness in the recording studio. “With Clockwork, our stuff would be so well-produced that our live shows would sound like a different band.”

To maintain that live energy, Hounds recorded the album largely live in the room at local punk-rock incubator Encapsulated Studios. “[We were] able to go in and track it like our live show — it was drums, bass and guitar being recorded at the same time. We wanted to be able to capture that and see if we were well enough along as musicians to pull it off.” The record, which will be released this week, is still so fresh that Hounds doesn’t have a release show planned — they’d rather let fans sit with the songs a bit and get familiar with the material. And while Jordan Slone has enough years behind him to know that rock & roll offers no guarantees, he knows that the band doesn’t plan on reinventing itself again any time soon.

“I don’t know exactly what it’s gonna do yet,” Slone says of the new record, “but we plan to play music long-term as Hounds as long as we can.”