Flipping through the old Sky Mall catalog a few years back, I recoiled in horror at an item that seemed to go against everything that is sacred in this world. Billed as a "miracle stick," the Clef du Vin purported to shortcut wine's aging process by using a blend of copper, gold and silver to force oxidation. For the impatient imbiber, it might sound genius. Why wait for that bottle of cheval blanc to mature on its own when you could reap all the benefits of twenty years of cellaring by swirling what looks like a metal pregnancy test in your glass?

Yet such a gimmick makes me cringe in the same way as when I hear about AI sex robots with back stories. Call me old-fashioned, but can technology really replace the human touch? More importantly, how can it possibly improve upon the already-divine brisket?

If you're wondering what any of this has to do with barbecue — the most primal of all cooking forms — it's because of Honey Pit Smokehouse, which opened on the southern edge of Kirkwood last December. Honey Pit's claim to fame is its technology, a water smoker designed by one of the barbecue world's winningest pitmasters, Myron Mixon. Co-owner Zach Fagas says the smoker's moisture-rich atmosphere allows the pitmasters to cook Honey Pit's barbecue hot and fast as opposed to the traditional low-and-slow method. No sitting around all night monitoring the fire — a special smoker, a pan of water and some high heat can shave hours off the cook time by simultaneously steaming and smoking the meat. It's barbecue for the attention deficient. 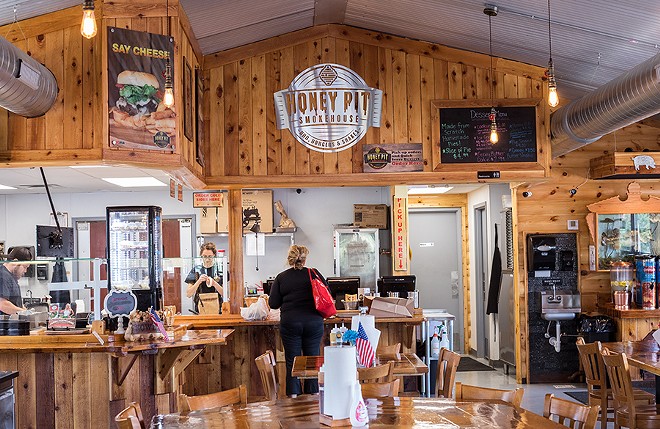 Fagas' partners, Shane Mihaljevic Sr. and his son, Shane Jr., are no strangers to fast food. As the owner of three Imo's Pizza franchises, Mihaljevic Sr. has made his living in a business whose success rests upon getting food to guests as quickly as possible. But he had bigger ambitions. A few years ago, the three men began musing about getting into barbecue and eventually decided to give it a go. They attended Mixon's barbecue school in Georgia and became so dazzled with his branded smokers that they bought one of their own. They parked the behemoth in the Mihaljevics' driveway, played around with their technique, and grew ever more determined to get their smokehouse idea off the ground.

That happened when they came across the building that used to house the Chinese restaurant Steak and Rice, at the corner of South Kirkwood Road and Big Bend Boulevard.

If the trio put effort into honing their barbecue craft, they doubled those efforts in converting the long-neglected building into Honey Pit. It was a makeover so extreme as to render the space unrecognizable. Knotty wooden walls and beams give the feel of a log cabin, and large windows flood the room with light. Old wagon wheels attached to wooden banquettes, camping lanterns and country music playing over the sound system create an old West vibe. The décor, however, is telling. On the walls hang photos of mouth-watering barbecue that are actually stock photos from Kuna Foodservice. It's a generic design choice that does not bode well for what is to come.

Having never used the Clef du Vin, I can't say whether it's an innovation that results in better wine without lengthy aging times. I can say, however, that no amount of gadgetry on Honey Pit's Mixon smoker can substitute for the many details that go into making superior barbecue. Innovative water smoker or not, it's the end result that matters, and unfortunately, Honey Pit's meats show that there are some things you just can't rush, even if you have high-tech gear promising just that.

Ribs are advertised as "competition style," a technical term for what is considered ideal in barbecue competitions. Yet they fall far too easily off the bone to be award winners and had a mushy texture. Though traces of smoke were present, they lacked that deep earthy taste and had little flavor from any sort of rub or seasoning, instead relying on sauce to mitigate their blandness.

Brisket is downright criminal. I won't take you down the "hot and fast" versus "low and slow" barbecue rabbit hole, but suffice it to say that whatever Honey Pit is doing results in inferior brisket. The meat is dry, tasteless and has zero bark — the sort of brisket you'd get if you found yourself at IHOP and inexplicably decided to order off a "Smokehouse Sensations" menu insert. Somewhere, Aaron Franklin is crying.

But though the brisket was irredeemable, it was not the worst offering. That honor goes to the salmon, a piece of fish so overcooked it was inedible. I appreciate Honey Pit's efforts at offering a smoked seafood selection, but the execution was so flawed, it was for naught. 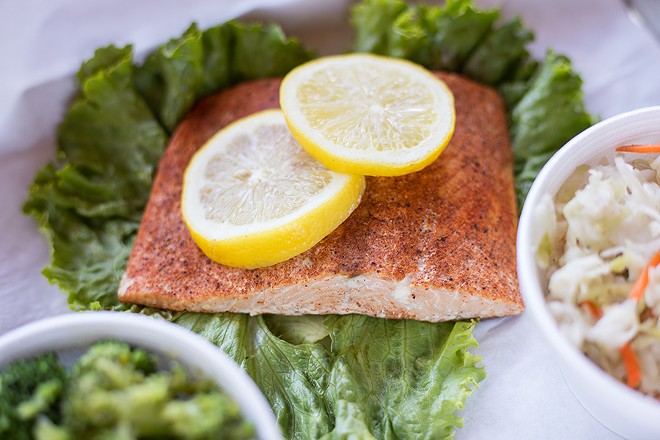 The restaurateurs should also be commended for trying to offer healthier options in a genre of food that can be gout-inducing. Honey Pit has an entire selection of "macro" offerings, developed with the local nutrition consultancy Fit Home & Health but executed with mixed results. Turkey was tender, succulent and well seasoned, but the salmon was as dried out as the regular menu version.

In fairness, not all of Honey Pit's meats were so disastrous. Pulled pork, though fairly bland without the addition of sauce, was tender and juicy. A sausage link was well seasoned with some welcome chile heat. The snappy seared casing blistered from the smoker's heat, making it one of the better meat choices.

Turkey was equally impressive. Its sweet wood-smoke-infused meat was positively succulent — a feat that is difficult to accomplish with a protein that is notorious for drying out. This is one meat that Honey Pit has mastered.

Honey Pit's burger is a solid backyard burger, a thick patty with a delightfully charred exterior that tastes like lawn darts and fireworks. A brisket cheesesteak is another likable sandwich offering. The brisket's dried-out texture gets reconstituted with garlic butter and molten Provel cheese, turning it into a respectable rendition of a Philly.

And some of the other menu items also work well. The Honey Pit crew is proud of its sides, and indeed, the restaurant puts more thought into them than many smokehouses. Touches such as honeyed peaches in the baked beans or hard-boiled eggs and dill mixed with the potato salad elevate these classic accompaniments, while mayonnaise-based broccoli salad pairing the vegetable with cheddar cheese and cranberries has all the nostalgia of a 1970s family reunion. The Provel mac-and-cheese was the one disappointment. I would have expected this superior melter of a cheese to result in a decadent concoction, but instead the pasta sauce proved thin and tasteless.

I'd say to skip the mac-and-cheese and save room for dessert, but only if you were getting the gooey butter cake. The night's other offering, a pecan pie, was cloying and overly sticky — more like a one-dimensional pecan caramel bar than pie. Just double up on the turkey and pass on dessert.

Besides that turkey, the best thing about Honey Pit is the hospitality. Though the restaurant is set up as a fast-casual concept, both the people who took the orders at the counter and the servers who delivered it and bussed the tables went out of their way to create the sort of warm, welcoming environment you'd find in a well-run full-service restaurant. It may not translate to great barbecue, but there is heart here — a good old-fashioned ingredient that can't be simulated, even with the fanciest equipment money can buy.

It's the one thing that makes me hopeful that Honey Pit will find its way. You can tell that Fagas, Shane Sr. and Shane Jr. are earnestly committed to doing good barbecue. That learning curve is just pretty steep, and unfortunately, no gadgets can speed up the process. Like good 'cue and good wine, that has to take its time. 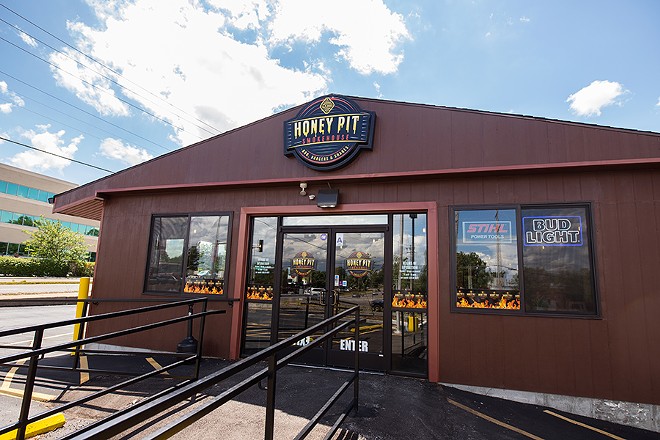