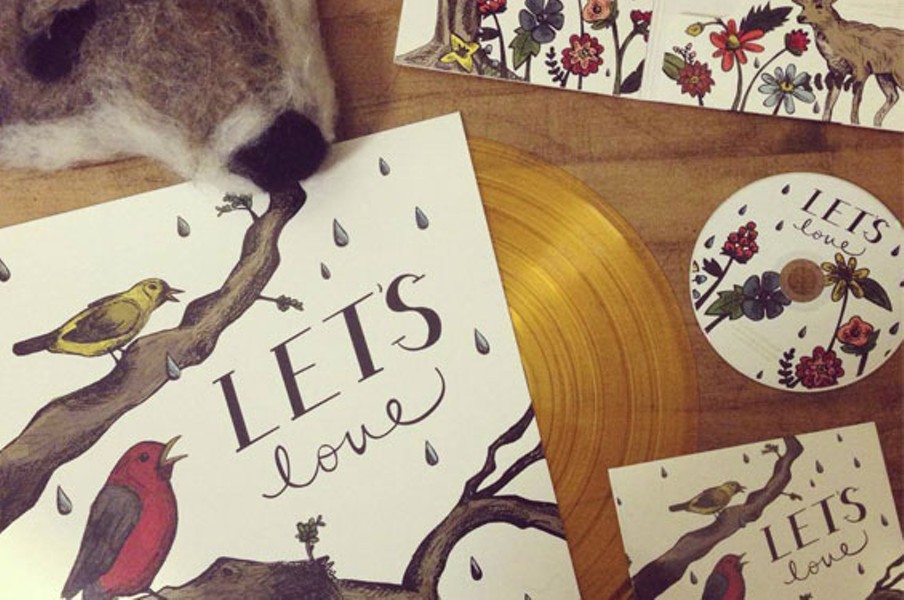 On its first album, 2011's American Songbird, Scarlet Tanager sang lullabies of young love and eternal summers with a cheery joie de vivre. On its second LP, those sing-along songs take a more adult approach. The closest thing that singer and guitarist Susan Logsdon gets to a lullaby comes in "Daddy Was," but as she sings "hush, baby, don't cry," a dark, bristling Delta rumble squalls behind her with overdriven organ chords and Jack White-indebted slide guitar lines. That's about as heavy as the six-piece gets on Let's Love — there are still plenty of hand-claps and ebullient group vocals here — but it signals a recognition of the thornier patches of getting older. Logsdon called her first batch of songs a record of "leaving home, falling in love and moving on." This album deals more with the hard work of relationships alongside the heart flutters; the title is as much of a challenge as it is a come-on.

Scarlet Tanager was recently nominated for the Riverfront Times Music Award as one of 2014's Best Indie Pop bands, and there's little on this record to challenge that claim. Across these thirteen songs, the band dips a toe in a few indie-rock slipstreams — country-Western pastiche ("How the West was Won"), aggressive, synthy rock ("Hand Grenades") and lots of bright, spangly pop songs elsewhere. Logsdon shows a flair for telling details and moments of emotional resonance in her songwriting, which is why it's a shame that too many choruses on these songs rely on a choir of "whoa-oh!" vocals in lieu of real words. It's a post-Arcade Fire trick that is good for a quick rush of emotion, but it gets dulled over the course of the album. For a band built on communal, joyful noise, Scarlet Tanager is perhaps more arresting when the energy is reined in and the subtle graces of harmony and concise arrangement shine. "We Watched Them" works off of quick guitar flicks, glockenspiel pings and a just-funky-enough drum shuffle, but it quickly burrows its way into something warm and true. The same can be said for the relatively spare ballad "Place That I Come From" and the gentle churn of "Hiding in the Reeds," which gives Logsdon space to showcase her expansive vocals. It's those moments of singular beauty and expression that stand out against the clang and clatter of Scarlet Tanager's kitchen-sink pop.