When the Alton, Illinois-based trio Hope & Therapy began in 2008, singer and keyboardist Hope Gaines had spent a short lifetime as a music fan — poring over her stepfather's record collection, going to shows, penning her own tunes. But putting herself and her music front and center was a new journey, one that drummer Drew Mader and bassist Dan Deck assisted her in undertaking.

"I've been writing songs for as long as I can remember, and singing before that," says Gaines. "When I met Drew and Dan I had a really large catalog of songs and I struggled with stage fright. They just pushed me and pushed me to get out there. In 2008, Dan and Drew, one late night, heard me playing some songs. And it sounds so corny, but they just sat down and started playing with me." 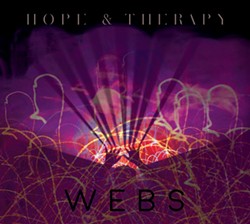 Those informal jams led to open mic nights and, eventually, gigs in and out of town, as well as the full-length album Heavy Dose. Six years have passed between that release and this year's Webs, an EP that serves as a reintroduction to the band, as well as a clear indicator of its fidelity to rhythmically entrancing, darkly burnished music.

Gaines certainly earns top billing in Hope & Therapy. Her vocals ring out with a clear-eyed purity, and while she flirts with abandoning her composure throughout the seven songs, she never cedes control. When she opens up and goes full diva, as on "Easier Said," the effect elevates the songs into high drama.

On that song, she works against a mellow electric piano and a gradually intensifying rhythm section; Mader starts with nothing but a four-count bass drum to set the pace, but as he and Deck dig into the track, its stops and starts give room to twists, turns and fills.

According to Mader, who formerly played bass in more math-rock oriented bands such as Ring, Cicada and Camp Climax for Girls, the band's musical middle ground comes together from different ends of the spectrum. "Dan's background is in punk rock, mine is in heavy rock & roll," he says. "It was something different for people in Alton for sure, who were more used to seeing me playing a full stack and screaming as opposed to seeing this jazzier, piano-based stuff.

"I think that I definitely try to bring a little more angst and aggressive tendencies, and try to pepper in elements of math-rock and stuff like that," Mader continues. "In Hope & Therapy, Hope's a great songwriter, where the other bands were about hammering out riffs. It's interesting to bring those elements into something that's songwriter-based."

Gaines' keyboard work, which favors simple patterns played on retro-synth patches, also gives crucial harmonic levity against a busy and buzzy rhythm section. On a track like "The Vine," Gaines is able to push her voice to its upper reaches while circular, bell-like figures ring out in celestial accord. Again, the grounding forces of Mader and Beck keep the rhythms shifting from steady, dubby pulses to hairpin changes.

"We're big on dynamics," says Mader. "We play it harder, then we play a little mellow, and then we hit it hard again." That process bears fruit on "Dear Darling," perhaps the most conventional composition on the EP, and one that sinks its teeth in during a magnetic chorus. The gradual effect of repetition and the shifting rhythmic tides give a rich, dense palette for Gaines to sing against.

Sessions for Webs began in May 2014 at Jacob Detering's Red Pill studio; Mader says that "regular life events" contributed to the gap between the two releases, as well as the delay between starting and completing this latest EP. "When we released the first album we recorded everything we had," says Mader. "We toured that material and eventually began writing new stuff."

Mader and Gaines, who are married, also welcomed a new addition into their family in the midst of tracking the album. "From the time we got to start recording Webs to the time it was finished, we actually became parents. So that was a speed bump in the timeline too," says Mader.

Mader had worked with engineer Jacob Detering during his time in Ring, Cicada, so Hope & Therapy's time at Red Pill studios took advantage of that familiarity.

"In the tracking sessions with Jacob, we took some suggestions for sure," says Mader. "He's a great producer and knows what works well." Matthew Sawicki helmed the board for lead-off track "Former Future," the newest song of the batch, and he handled the final mixing and mastering as well. "We decided to mix with Matt because he takes more of an aggressive approach. We wanted these to hit a little harder," says Mader.

Hope & Therapy plans to continue gigging around the Metro East and St. Louis in support of the album, though Gaines says it's been "somewhat challenging" to make headway in the St. Louis scene.

Mader concurs. "Since we're not in St. Louis proper, we don't get the chance to mingle as much," he says "It takes due diligence to make connections."Both Gaines and Mader cop to hometown pride, though, and mention Alton heavyweights Back of Dave and Judge Nothing in our interview.

And while Hope & Therapy's more ethereal approach to songwriting and production may suggest otherwise, Gaines sees a kinship between her band and her town's rock heritage: "Alton has deep roots in punk rock and heavy riff rock that has influenced us in some ways."


Stream Webs in its entirety below: