St. Louis' Accelerando Picks Up Speed With a Self-Titled Debut 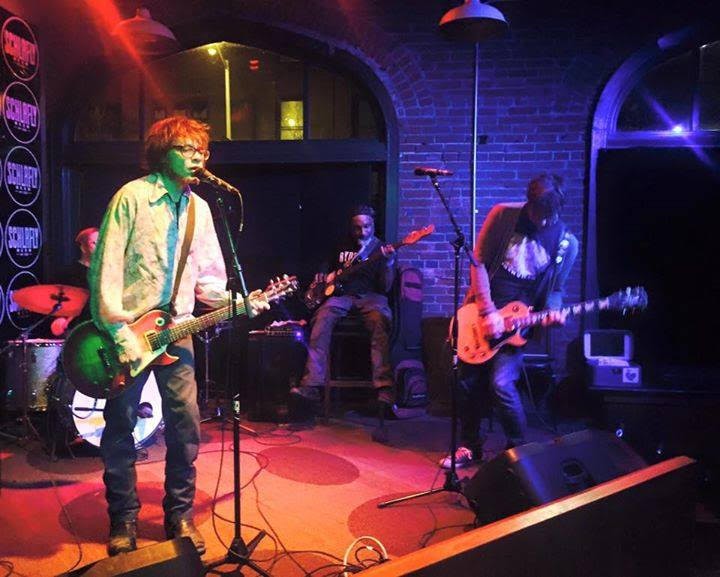 For those musicians tutored enough to read sheet music, the term "accelerando" means to play with increasing speed — to accelerate until instructed otherwise. The local rock & roll quartet Accelerando may or may not be sheet music sight-readers, but the loose, grainy feel of its songs suggest that the band has taken its name as a statement of purpose. While the songs on Accelerando's debut album may not always have the kinetic energy associated with a band named around the idea of acceleration, these tracks refuse to sit still or settle into a predictable structure. It's restless rock music that doesn't need to be referential to thrive.

Forgive us, as this music theory talk may have buried the lede: Accelerando is driven by the voice, words and guitar of Mark Stephens, an accidental South Side saint and veteran of campaigns with bands such as the Boorays, Highway Matrons, Fred's Variety Group and the Deserters. His vocals, craggy and cracked in the right places, still sound young more than twenty years after making his debut on local stages, but that's due in part to some of the wizened grit he brought to those other bands. In Accelerando, Stephens is joined by drummer Kevin Siebenaler (Money for Guns), bassist Todd Dorsey (Red-Eyed Driver) and, on this recording, trumpeter and percussionist Baird Johnson. (John Beck, a guitarist who first played with Stephens in the Deserters, is a recent addition to the live band.)

In conversation, Stephens expands on the band's name and examines how that technique of abandoning verse-chorus-verse structures informs the music on the album. "There are some that have traditional song form, but when we started we were of the mind that that was sort of boring to us," he says. "The idea is not repeating things in the normal way. I love that form — Tom Petty writes every song in that form — but we wanted to try something different."

Early in the album's progression, the band's approach becomes clear, but only if you're paying attention to your CD player's display. Songs bleed into one another with barely a breath in between and, in this sequence, build on the dark-tinted tension of what came before. First track "Broken Hearted Diet" finds Stephens delivering an equally sad-eyed and blistering kiss-off to an ex-love, while the following song "You Have Yet to See the Longest Day" trades in some of that angst for atmospherics, buoyed in places by Johnson's trumpet lines.

Accelerando does not seem to have a particularly well-developed web presence — a limited Facebook page is all that exists on the eve of the album release. Whether that is intentional or an oversight is hard to say, but there's a particular advantage to picking up a copy of the self-titled disc versus an online stream. The package features the photography of the late Bob Reuter, who was Stephens' old roommate and who initially partnered with the guitarist and Siebenaler in a short-lived band before Reuter joined forces with the young men in Alley Ghost.

"Bob was so much a part of the band," says Stephens. "We used to practice over here at the house; he had taken tons of pictures of us. I kind of felt like it was important to get that out, since it was his intention."

Reuter's singular black-and-white style of photography graces the album art — a rusted-out car, a sweaty band rehearsal, a goof-off shot of Johnson — that, to Stephens, helps mark this album in a place and time. Johnson, in the words of Stephens, "disappeared" a few years ago, and Reuter's sudden death in 2013 makes his distinctive photography — once a hallmark of many, many local releases — feel like a transmission from an earlier time.

In a way, that's in keeping with the album itself, which was recorded in the summer of 2012 and is just now seeing a release.

Stephens explains the long lead-time: "We recorded it in the Black Rep where I used to work — it was this huge, black, long room," says Stephens. The Black Rep was where Stephens met Johnson and, thanks to a lucky find in the props department, Johnson rediscovered his skills on the trumpet. Initially, with Siebenaler, the players started off as a bass-less trio.

"Once, Tazu (Marshall, engineer and producer) got it back to his studio and we did some overdubs and stuff. He was having a hard time matching up the sound of the room with anything we had done after that," Stephens says. While Marshall was tinkering with the recordings, the band was side-lined with a string of bad luck that left it unable to gig around town.

"Todd was in the hospital for a long time with a staph infection, and after that Kevin broke his leg. We went almost a year just playing a few shows," says Stephens. "There was just kind of a long period of fallowness."

When asked how Accelerando compares to his previous bands, Stephens simultaneously credits his old groups while propping up his current flame. He credits drummer Siebenaler in particular — for coming up with the band's moniker, for naming many of the songs and for providing a malleable groove for these shape-shifting tracks to grow.

"I love the way Kevin thinks and writes songs. It reminds me a lot of Fred's Variety Group in that it's a collaboration," says Stephens. "Everyone feels it's theirs."