by Jordan Harper and Robert Wilonsky 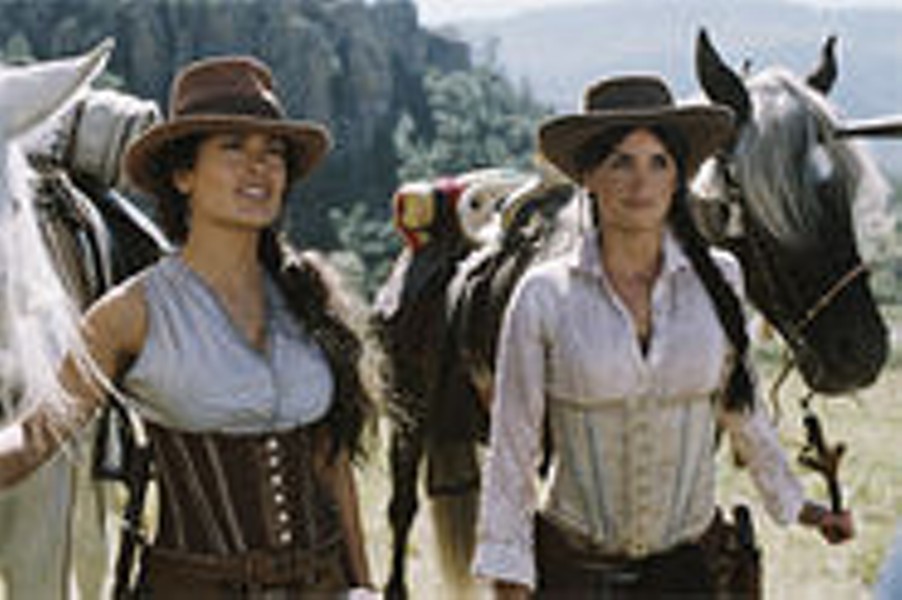 This review is not long enough for a suitable treatment of the beauty of Penélope Cruz and Salma Hayek. The makers of Bandidas would certainly prefer I tried, though, than to discuss this plodding cliché of a western featuring the two. You could write the script right now if you wanted: One rich girl (Hayek) and one poor one (Cruz) battle evil white bankers who want to buy up all the farms in the area by robbing banks. Hijinks ensue. It's actually watchable, thanks to a funny performance by Steve Zahn as an early forensic scientist. And Cruz and Hayek's chemistry transcends male viewers' wishes that the climax would involve a pillow fight; it'd be nice to see the two paired again with a different film. Evidence: Though their commentary track includes nothing particularly brilliant, it's more entertaining than the movie. -- Jordan Harper

Conspiracy theorists had a field day with Fox's mysterious shelving of Mike Judge's third feature. But perhaps there was a very simple explanation for Idiocracy's being released almost straight to video: It's powerfully bad stuff. Luke Wilson, as a soldier recruited for a cryogenic experiment gone awry, awakens to find himself in a dumb-ass future. The movie posits that down the road, America will be nothing more than a junkyard-whorehouse populated by F-word mumblers and violence fetishists sprawled on reclining toilets. And, yeah, as satire goes, Judge makes his point; the creator of Beavis and Butt-head knows all about the dumbing-down of America. Only the point is dull, obvious, and wearying a few minutes in; yeah, yeah, Fuddruckers is now "Buttfuckers," but must we bite on the shit sandwich? -- Robert Wilonsky

There's no denying the obvious: Extras, Ricky Gervais and Stephen Merchant's follow-up to The Office, doesn't possess the potent sting of their first work. Set on studio backlots and movie locations, where Gervais' Andy and his best mate Maggie (Ashley Jensen) beg for just one line while awaiting their turns at the catering table, is more amiable than its predecessor -- less irritaining, as it were, which feels like a comedown after the grating genius of their initial masterpiece. That said, Extras, filled with real movie stars making asses of themselves, is a joy to watch. But the real pleasures here come from the crack-up outtakes and the uproarious doc about trying to find the agent for Leo DiCaprio after Jude Law drops out. Gervais winds up having to use international directory assistance; never has a man looked more defeated. -- Wilonsky

If you watch only one movie from 2006 about turn-of-the-century magicians, make it . . . well, it's pretty much a toss-up. While The Prestige wins on style, The Illusionist features excellent performances from Edward Norton and Paul Giamatti. Norton plays the titular illusionist with an air of supreme confidence, as he attempts to woo Jessica Biel away from the crown prince of Austria. Giamatti gets second billing, but probably more screen time, as a police official who isn't quite totally corrupt. The problem with both movies comes from their adherence to the old tropes of con-artist flicks like The Sting . . . once you've seen a few movies where "everything is not as it seems," predicting the twist gets easy -- and The Illusionist is easier than most. The special features are scant; blow on the documentaries and they'd disappear. -- Harper