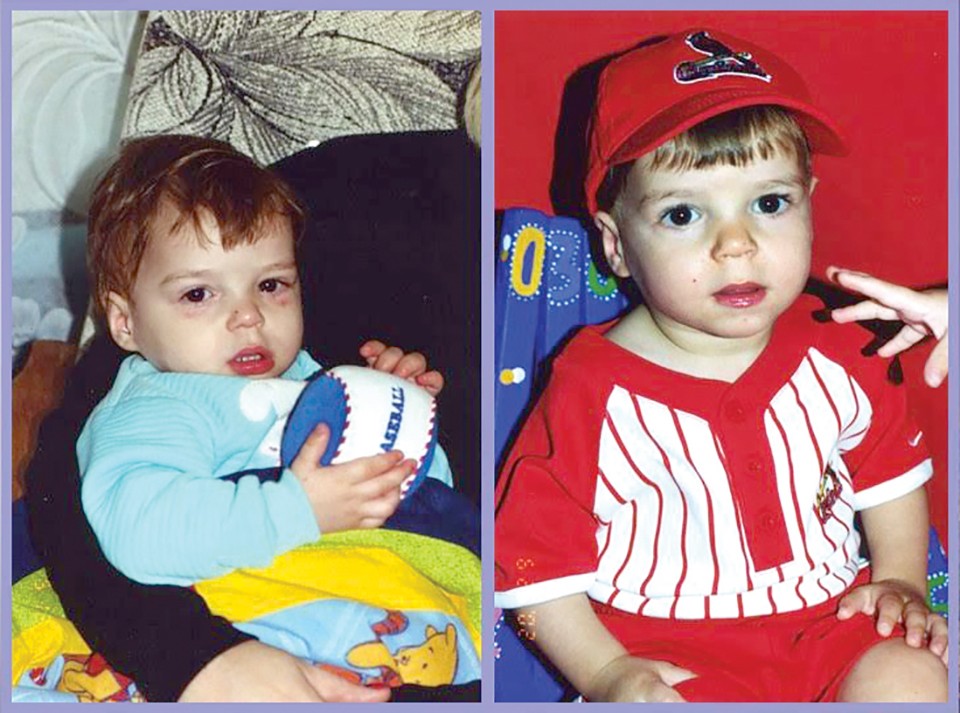 Austin spent the first fifteen months of his life in an orphanage in Russia. Laurie and her husband at the time, Lou Calzada, traveled in May 2002 to the city of Maykop near the Black Sea to adopt the toddler and his older sister. It was a harrowing trip. They expected to be shaken down for bribes, so Laurie says Lou had $7,000 cash strapped to his body in a money belt during the flight across the ocean.

The orphanage was bleak. Laurie recalls babies packed two to a crib in the dingy infant room and a playground comprised of a rusty pipe on a concrete slab.

"It was literally very similar to the movie Annie," she says.

In a picture Laurie took right after the adoption, Austin is sallow-skinned with deep bags under his brown eyes. His older sister, Angeles, was so sick that she was in the hospital when they arrived.

After that stressful first meeting, it was a relief to fly home to the United States. The kids rebounded almost immediately after arriving in St. Louis. In a second photo, taken just ten days after the first, the bags under Austin's eyes have disappeared, and he is so much healthier it is like he is a different boy.

There were still signs of problems ahead. Laurie says she would put him in her lap, and instead of snuggling up, he would immediately roll away to get down.

"You could tell he'd never been held," she says.

She would later learn this was a symptom of reactive attachment disorder, a rare disorder in children who are neglected as infants and miss out on critical early connections with parents. Later, doctors also recognized signs of fetal alcohol syndrome in the boy.

As he grew, he was diagnosed with attention deficit/hyperactivity disorder and prescribed Adderall in the first grade. It was fine at first. But Laurie says she learned later that the combination of the powerful drug and the changing chemistry in boys could have combustible side effects. When he was nine, Austin's behavior suddenly became aggressive and erratic.

"That's when I really saw the highs and lows of the drug," Laurie says.

Austin's mood would swing wildly. He might be calm in the morning and then try to kick the windows out of his mom's car in the evening. Laurie and her husband had separated three years after the adoption, and the kids primarily lived with her. In his fury, Austin would grab knives and threaten his mother, sister or himself. He was tiny — maybe 50 pounds in seventh grade — but Laurie says his anger could be frightening. She recalls waking one night to find him at her bedside, just glaring at her.

"I got to the point where I really thought he was going to seriously hurt me or my daughter," she says.

In 2010, Austin had become so aggressive that he was hospitalized for a week. It turned out to be a major step forward. A neurologist from Washington University helped wean him off the Adderall, and Laurie saw the most aggressive behavior begin to fade almost immediately.

"It was the chemical imbalance," she says of the most frightening times. "It was not Austin."

He was diagnosed with autism in fourth grade. By the time Austin was heading into junior high, the darkest days had begun to lighten. Laurie moved the kids into Brentwood after researching the best school districts for her son — a decision for which she is still thankful.

"Brentwood School District is the best-kept secret in this town," she says.

The middle school's principal, Dr. Andrew Loiterstein, sometimes talked to Laurie six or seven times in a school week as they searched for programs and strategies.

"Some days, he was doing great," Loiterstein says. "Other days, we were trying to micromanage his day minute by minute so he could find some success."

The unprovoked aggression of the Adderall period had subsided, but Laurie says her son still struggled with anger issues. He was socially awkward and sometimes lashed out as he struggled to fit in. Once, he grabbed a saw from the school shop and chased another student. But mostly, it was trouble following rules or navigating the schoolwork expected of him.

Laurie describes the years of late elementary school through middle school as their "journey." Austin required near-constant attention, making it impossible for her to work. Even as he began doing better, issues popped up almost at random. Some of it seems funny — like the time he learned origami and stayed up all night blanketing the floors of the condo in paper cranes. Others were less so.

Laurie and her ex-husband were called into a meeting with the school district because Austin was caught giving other students the melatonin pills he was supposed to take to help him sleep after phasing out the Adderall. Laurie says a former district official at the meeting told them Austin could be expelled. When she described her son's struggles and tearfully pleaded for the district's help to send him to a school for kids with special needs, she says, she was told that little could be done unless he hurt someone or himself.

"That was my real turning point," Laurie says.

Ultimately, Austin was suspended, not expelled. That kept him under the compassionate watch of Loiterstein and his staff for a few more months, but Laurie was terrified. High school was looming, and while Austin seemed to be emerging from the hardest days, it was clear a big public high school was not going to work.

"He was going to drown," Laurie says.

She was not the only one who worried.

"There was this big, vast unknown in terms of what his next steps would be," Loiterstein says.

Then, in Austin's last month at Brentwood Middle School, a school official gave Laurie the number to a psychiatrist in Barnes-Jewish Hospital's behavioral health department.

Desperate for help, she called without knowing what to expect and agreed to bring Austin for a consultation that summer of 2015. Austin spoke to the psychiatrist first, and then his parents took their turn. Laurie laid out their long, painful story, only to learn this was just a one-time visit. It seemed like a total waste of time.

Then she got a call the next day. The hospital had agreed to accept Austin into a program. Not only would he begin therapy with the psychiatrist, he would be assigned a caseworker and educational assistant. Funding would help cover the costs, including medications.

Laurie says she is still not entirely sure what happened, but she is forever grateful.

"That was the day that changed my life," she says. 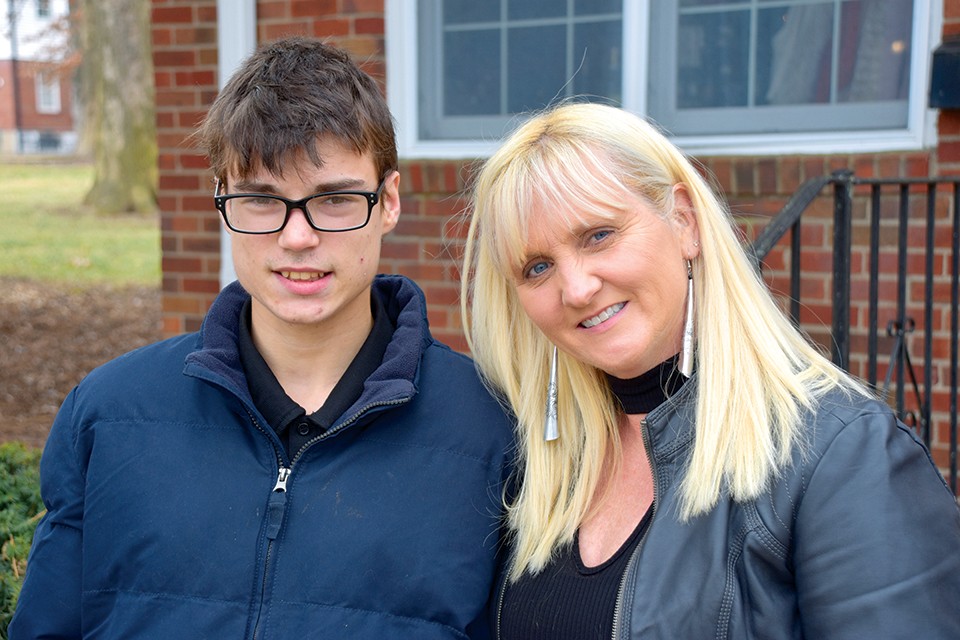 BJC helped fine-tune his medications, and the first comprehensive psychiatric evaluation of his life revealed bipolar tendencies, along with the autism. He began regular therapy sessions. Laurie could soon see changes taking hold.

Austin's new allies also helped Laurie lobby the school district to place him in Logos. She had filled a file cabinet with her research of potential options over the years, and the private therapeutic school in Olivette seemed like a dream. Designed to address autism along with a wide variety of challenges and disorders, Logos paired each child with his or her own therapist and kept class sizes tiny.

It was also the most expensive of the options available. Laurie and Austin's advocates were asking Brentwood not only to acknowledge that the public school district could no longer provide adequate opportunities as required under the law, but also to pay Logos' tuition.

Austin's future was decided during an intense three-and-half-hour meeting that summer before his freshman year in high school. Laurie and his dad sat around a table of more than fifteen people, including district officials, Loiterstein, teachers, the high school principal, representatives from the special school district, counselors and therapists.

Before they began, they called Austin in and asked him to tell the group what he wanted.

"All I know is I want to be somewhere they understand me and where they'll be nice to me," he said, his mother recalls.

It was so heartbreakingly basic.

The group ultimately voted to send Austin to a private school — a decision Laurie believes "saved my son's life." The next day, she learned from the district she would get her first choice, Logos.

"I haven't cried a day since," she says.